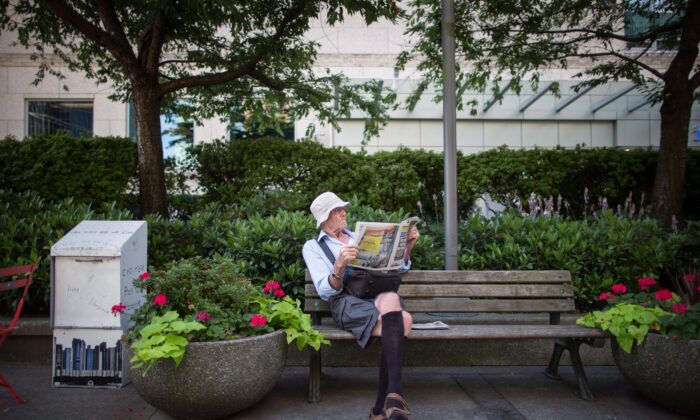 A man reads a newspaper while sitting on a park bench in downtown Vancouver in a file photo. (The Canadian Press/Darryl Dyck)
Canada

Only 29 percent of respondents indicated that the media is free from undue political influence, compared to 39 percent in 2017
By Isaac Teo

A study on how people globally engage with the news found that Canadians are increasingly losing trust in the media.

A report released June 15 by the Reuters Institute for the Study of Journalism found that Canadians who place their trust in the news fell from 58 percent to 42 percent over the last four years.

The study is based on an online survey of 93,432 people, conducted in 46 countries at the end of January and beginning of February by YouGov, a UK-based market research company, on behalf of the institute.

Canada ranked 18th in overall trust out of the 46 countries surveyed, which include Australia at 20, the UK at 36, and the United States taking the last spot.

“Large numbers of people see the media as subject to undue political influence, and only a small minority believe most news organizations put what’s best for society ahead of their own commercial interest,” wrote Rasmus Kleis Nielsen, director of Reuters Institute, in the report.

The report added that dissatisfaction with governments and pandemic fatigue may have contributed to the negative attitudes toward the media, and the perceptions that media outlets have not been critical enough of official sources such as public health authorities.

A February study by marketing consultancy firm Edelman Canada found that 61 percent of Canadians believe journalists and reporters purposely try to mislead them “by saying things they know are false or gross exaggerations,” with business leaders (60 percent) and government (58 percent) not far behind.

In addition, less than half of Canadians view government leaders and CEOs as trustworthy, at 43 percent and 36 percent, respectively, said the Edelman report, which is based on an online survey with over 1,500 Canadians during the period of Nov. 1–24, 2021.

Meanwhile, the Reuters report noted people around the world are increasingly avoiding news that affected their mood negatively (36 percent), and those that focused too much on politics and COVID-19 (43 percent).

“The need for reliable information, careful context, and considered debate has rarely been greater, but so too has the desire for stories that inspire and give hope of a better tomorrow,” the authors wrote.