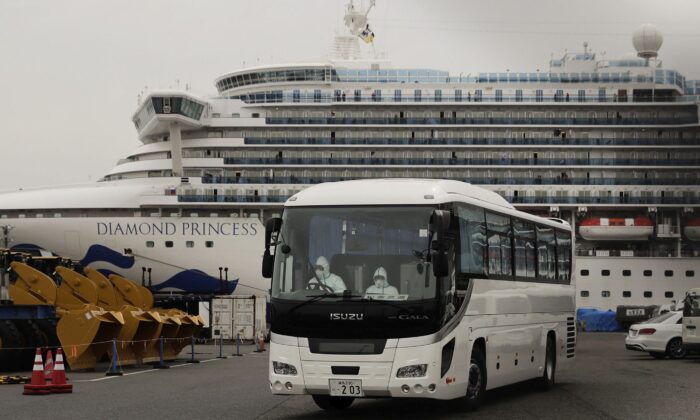 A bus leaves a port where the quarantined Diamond Princess cruise ship is docked on Feb. 15, 2020, in Yokohama, near Tokyo, Japan. (AP Photo/Jae C. Hong)
Canada

OTTAWA—A sixth presumptive case of COVID-19 has been diagnosed in British Columbia after a woman in her 30s returned to the province from Iran, bringing the total number of cases in Canada to nine.

Provincial health officer Dr. Bonnie Henry said Thursday the latest patient’s case is relatively mild and a number of her close contacts have already been put in isolation.

Henry said earlier this week that four of the five people already diagnosed with the virus were symptom free.

This latest case comes as a planeload of Canadian evacuees who have spent weeks confined to cabins aboard a coronavirus-stricken cruise ship in Japan were expected to begin two weeks of isolation in Cornwall, Ont., Friday, unless Canada’s top health official deems them healthy enough to be released.

And Canadian authorities are looking closely at their experience on the Diamond Princess cruise ship as the country prepares for an upcoming tourist season with concerns about the novel coronavirus, called COVID-19, still very much up in the air.

Initially the government said the evacuees from Japan would have to spend 14 days in isolation because that is considered the typical incubation period for the virus.

But because all the passengers have been tested for the virus by Japanese authorities, Health Minister Patty Hajdu said Thursday there is a chance that they will be released early from quarantine if they show no symptoms upon their return to Canada, under the discretion of Canada’s top public-health doctor.

Those who were cleared to travel are to be screened again at Canadian Forces Base Trenton before they are placed in isolation at the Nav Centre in eastern Ontario.

Each passenger was given a government-issued facemask and coloured wristband before they were ushered off the ship in Yokohama to nearby Tokyo’s Haneda Airport, according to a letter from government officials to the evacuees on board the ship.

Dr. Theresa Tam, Canada’s chief public-health officer, has already released flight crew and medical personnel who escorted Canadians home from Wuhan, China, where COVID-19 was first detected, but so far all the evacuees themselves have had to serve the full quarantine period.

The Diamond Princess cruise ship has seen the largest outbreak of the virus outside China, with 634 passengers having tested positive at last count.

Hajdu said Canada will be keeping its eye on Japan’s examination of how the virus was handled aboard the ship, especially as it relates to Canada’s own upcoming tourist season. Measures aboard the ship seemed to do little to keep COVID-19 from spreading.

Canada has numerous cruise terminals, from relatively big cities such as Vancouver and Montreal to smaller ports such as Prince Rupert, B.C., and Baie Comeau, Que.

“There has been obviously concern about the practices on board the ship that have potentially led to the increased spread of the coronavirus on the ship,” Hajdu said, adding that she also has empathy for Japanese officials who had to handle the quarantine of more than 3,000 people docked off a major city.

The evacuation came just after Japanese officials broke the news that two passengers from the ship died after contracting the virus.

The two people who died, a man and a woman in their 80s who are both Japanese, were believed to have been infected before the quarantine began on the ship, Japanese health ministry official Masami Sakoi said Thursday.

The 47 Canadian passengers who have already tested positive for COVID-19 remain in Japan for treatment.

Other Canadians who did not wish to return to Canada on the chartered flight will be expected to undergo a mandatory 14-day quarantine when they eventually return to the country on a commercial flight. Those Canadians are to be flagged upon their return to the country, and live out their isolation periods at home or in a designated facility, Hajdu said.

Anyone who returns commercially who doesn’t abide by the quarantine order would face penalties, she said.

As for the first 213 Canadian evacuees and their families who have served out their two week quarantine at CFB Trenton, they are scheduled to be released Friday. So far, none have developed symptoms after their arrival from Wuhan, China, the centre of the COVID-19 outbreak.

The second wave of Wuhan evacuees are expected to be released next week.

The government is now working to help facilitate their return to their homes.