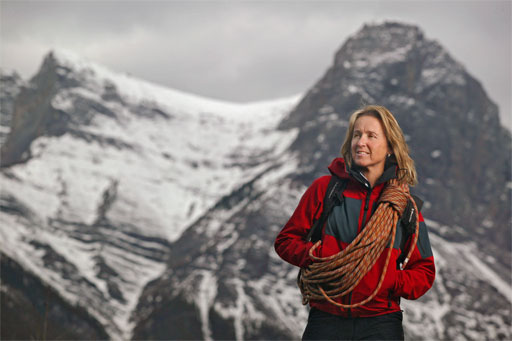 The threat of death stops most people from pursuing high-risk adventures, but for Sharon Wood, the first North American woman to summit Mount Everest, it was simply a challenge to be overcome.

Today, the 56-year-old prefers a low-key life in the mountain community of Canmore, Alberta. But back in 1986 she was staking her claim at the top of the highest mountain in the world.

There were many reasons Wood should have failed in that endeavour—she was with a small team on a limited budget, and chose a difficult route via Everest’s west ridge without the aid of sherpas—a feat that many have since tried and failed.

Wood talked with the Epoch Times about her undying passion for mountaineering, her struggles with instant fame, and why climbers today aren’t giving Everest the respect it deserves.

Epoch Times: When did you know that Everest was something that you had to do?
Wood: I knew when I watched my friends and colleagues on their first trip to Everest in 1982. That climb was plagued with conflict, tragedy, and bad luck. It was watching those men, my friends, rise to the challenge [that inspired me]. I was attracted to that intensity, that level of a test where you have to rise to it or go home. By that time I had already been climbing for a decade and knew that I still had more in me, and more potential that I wanted to discover.

Epoch Times: What was the most difficult aspect of climbing Everest?
Wood: I think it was overcoming tremendous doubt [because] we did not have the perfect setup to climb that mountain—we were short on manpower and had horrendous conditions. I had to go further than I ever could have imagined in terms of physical and psychological endurance.

Epoch Times: Is there a parallel between climbing and learning about yourself and/or others?
Wood: You see somebody’s character very quickly [in climbing] because it’s quite intense. When people are taking risks and you’re up against the unknown—which is a lot of what climbing is about—you soon find out what’s underneath people’s personalities.

Epoch Times: Was being the first North American woman to summit Everest a big motivation for you?
Wood: No, not at all, contrary to why people climb the mountain these days. I just felt so privileged to be on that team. I wanted a chance to run with the best, and they were really the best in Canada. And there was some excitement around trying something that had never been done before. … Everybody just threw in whatever they had, and then some. I love working with teams where there’s synchronicity—it’s almost a kind of magic.

Epoch Times: It was reported that you were upset the media focused so much on you, but not the rest of your team. Why?
Wood: I think the media missed the point. It’s not about one individual in something like that, it was about all of us. I would have not gone anywhere near the top without the rest of team and the magic of that teamwork, and I was very sorry that that was missed. It was embarrassing. It was short-changing something much bigger than just me.

Epoch Times: You said that people climb Everest for different reasons these days. What is the difference?
Wood: People are taking on Everest now as something on their bucket-list, something that they think will give them a trophy that they can bring home and put on their mantelpiece. Everest is being desecrated by people who are inexperienced and just after the trophy. There’s something very wrong in that. I believe people should be very invested in the sport of mountaineering, the lifestyle of mountaineering, before they try something like that. They endanger the lives of others when they put their ambitions before their common sense. I think the value of character, of what’s underneath us, and how we get to the top is way more important than getting to the top in itself.

Epoch Times: Aside from your climbing and teaching, you are also a motivational speaker. How do you think people can reach their potential, not by conquering a mountain, but in their everyday lives?
Wood: I think to find the courage to follow what resonates for you, to listen to what resonates for you, not necessarily to anyone else, but to find your own passion. There is a lot of pressure to follow or maintain the status quo, so much so that it can take you off course, and that’s when I think you really need the courage to stay on your own path.