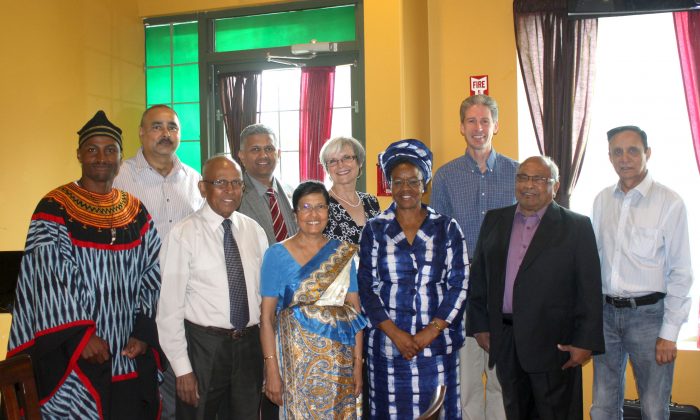 R.B. Herath (third from left) and colleagues mark the launch of the Global Peace Alliance at a press conference in Surrey, B.C., on Sept. 16, 2013. (Courtesy R.B. Herath)
Canada

What if achieving world peace was not a monumental task left to global institutions, but could be brought about by ordinary people through their everyday thoughts and actions?

Author R.B. Herath believes this is entirely possible, so much so that he has started a global peace alliance with like-minded individuals in order to realize his theory. His latest book, “A New Beginning for Humankind: A Recipe for Lasting Peace on Earth,” acts as an instruction manual of sorts on how to reach this lofty goal.

A resident of Surrey, B.C., Herath grew up in Sri Lanka amidst rising ethnic tensions. Realizing a separatist war was looming, he devoted himself to trying to unite his country—first as a student leader and then as head of a liberal democratic political party—all while writing several books on reform and conflict resolution.

When war eventually broke out in Sri Lanka in the mid-1980s, Herath left. He subsequently lived on four continents, including in several conflict-plagued countries, before settling in Canada.

In his writing, research, and travels Herath constantly probed one question: What is the driving force feeding ongoing conflict and what can be done to stop it?

In his quest for answers, he decided to track all of the world’s major conflicts on a map to analyze their common roots. From this exercise he came to believe that conflict always erupts for one of four reasons: greed, vengeance, irresponsibility, and the inability to treat global well-being as a major issue.

These so-called “enemies of peace” are all found in human beings, and thus can also be corrected within us, he surmised.

“Simple [virtues] such as caring and sharing, forgiving and forgetting, acting responsibly in a trustworthy manner, and of course treating the wellbeing and happiness of all humans just like one’s own—these four virtues have the power to combat, confront, and eradicate the worst enemies of peace,” he says.

When Herath looked back at his map he also realized that in societies where people embrace and implement these virtues in their personal lives, it can act as a shield, or a self-fulfilling mechanism against menaces like corruption, despotic rule, and violence.

Herath is the first to admit that this all sounds too good to be true and not applicable to complex, real-world scenarios when tensions are running high. But it was through lived experience, when he saw societies transform before his eyes, that he knew change was possible, and moreover, that it could be simple.

One such experience occurred while he was living in Zambia, a developing country plagued with post-colonial struggles. Herath observed that despite the infrastructure challenges, Zambian drivers had exceptional road manners, better than any other country in which he had previously lived.

When he researched this peculiar fact he found that Zambia has a long history of teaching road manners in school, with programs led by students themselves. The work of the students and teachers inspired the parents, who brought it to their workplaces, church groups, and eventually, the whole country was on board.

“This simple program changed the behavioural pattern of one whole nation.”

Herath calls this the “ripple effect”—when one group commits to practicing good human behaviour and it inspires enough people, it can eventually infiltrate the broader society and lead to lasting social change.

Although he later became corrupt, Kaunda was instrumental in uniting Zambia by coining the slogan “One Zambia, One Nation” and adopting other nation-building policies. The slogan was introduced and chanted at cabinet meetings, which then spread to schools, workplaces, and even sports events.

In another example of the ripple effect, Herath cites the success of Earth Day, which was launched in 1970 and has since funnelled growing environmental concern into real action.

Once a societal problem is identified, through personal and societal reflection combined with resolute action, training, inspiration, and encouragement, it can be resolved, Herath believes.

“Ordinary people have the power to take centre stage and change things—to bring about good human behaviour in areas of concern.”

Last month, Herath led the first workshop for his Global Peace Alliance, drawing together about 50 like-minded “peace builders” to discuss how to launch the movement in their communities.

The alliance will form pilot projects to test in members’ own neighbourhoods, while recruiting religious, political, and community leaders and organizations such as the United Nations to join their cause. They also aim to design a curriculum in order to approach school boards about teaching the concept in schools.

“With the blessing of all these parties, I’m sure we can have an interesting and productive march towards global peace,” says Herath.