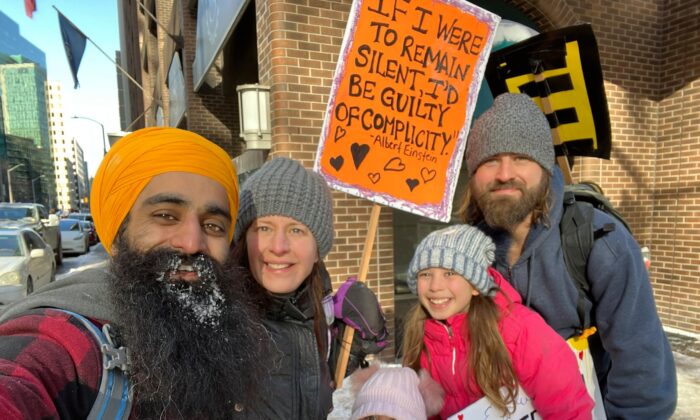 Canadians are being deliberately misled by the Trudeau government and many media on the large diversity of supporters of the trucker convoy demonstration in Ottawa, an academic says.

Since the “Freedom Convoy” converged on Canada’s capital on Jan. 29 to protest federal vaccine mandates and other pandemic-related policies, supporters say the movement has drawn thousands of Canadians from many demographics and every province.

The protest has inspired parallel movements in the United States, Europe, Australia, a U.S.–Canada border blockade in Coutts, Alberta, and a pan-Canadian protest on Feb. 5 (which included a major counter-protest in Vancouver). It has also garnered support from Tesla CEO Elon Musk and podcast giants Russell Brand and Joe Rogan.

While the Ottawa protest has generated support at home and abroad, major Canadian media outlets have aligned with Prime Minister Justin Trudeau to portray the movement as a “fringe minority” group of white supremacists and racists, says Travis Smith, an associate professor of political science at Concordia University.

After the convoy’s first weekend in Ottawa, Trudeau called the protest “an insult to memory and truth” while saying on Twitter that protesters had displayed “antisemitism, Islamophobia, anti-Black racism, homophobia, and transphobia.”

Smith told The Epoch Times: “The government and their arms in the media have been working hard for a long time turning citizens against each other so that people don’t place blame where it belongs for the ongoing hardships that continue to be imposed upon them.

“Canadians are deliberately misled regarding the diversity found among those who are displeased with the [COVID-19] policies in place.”

An Innovative Research Group poll published on Jan. 31 found that 31 percent of Canadians support the trucker protest, with 46 percent opposed.

In a Jan. 27–28 Angus Reid online poll, 54 percent of Canadians said they would like to see restrictions ended, including a majority of every province except the Maritimes.

Smith wrote his doctoral thesis at Harvard University in 2005 on how medicine can be used to destroy liberal democracy.

He’s critical of the Liberal government’s five-year, $600 million bailout of struggling media outlets initiated in 2019. Using the media to divide citizens is one of “the oldest tricks in the book” for political leaders, Smith said in a recent Western Standard podcast.

He said that when he stopped at a truck stop one hour outside of Ottawa to observe protesters in the eastern convoy, people were friendly, working together while stocking supplies, and feeding one another with a sense of community, respect, and optimism.

‘Every Type of People’

Palminder Singh, who was born in India and now owns a small construction company in Brampton, Ontario, drove over four hours to Ottawa, back-to-back both weekends, to protest government COVID-19 policies that he says have strained the mental health and livelihoods of his family in many ways.

Singh has attracted over 1 million views on his Tik Tok account, where he shares videos of him and his friends supporting the protesters with food and supplies. He also discusses his battle with depression and frustrations over lockdowns and vaccine mandates, while mocking the idea that he is part of a “fringe minority.”

“I would ask Trudeau and every Canadian to go over to Ottawa and tell those protesters they’re racist, white supremacists, because there are Muslims, Hindus, Indians, Pakistanis, indigenous, and every type of people there,” Singh said in a phone interview.

“I felt the first time in my lifetime that nobody was asking, ‘Where are you from?’ Everybody was hugging me, saying ‘I love you, we love you, we support you.'”

Singh said he didn’t see any racist behavior or flags at the protest. The legacy media and government has been intentionally ignoring the trucker protesters who have denounced any outsiders who engaged in racism, he added.

For Singh, the COVID-19 mandate protest represents a “collective consciousness” of fed-up working-class Canadians, which he compares to the farmers’ protest in India that began in 2020.

“Everything we are seeing right now with the trucker protest happened the same with the farmer protesters in India,” Singh said. “[Prime Minister Narendra] Modi and the mainstream media in India called the farmers separatists, terrorists. They’ve divided the people into different caste systems, religions, then after that by political parties.”

The 31-year-old says it’s hypocritical for Trudeau to denounce the concerns of the protesters in Ottawa after he told Sikh Canadians that he stood with the farmers 14 months ago while urging Modi to engage in dialogue with them.

Singh believes politicians and media should be listening to Canadians and dissenting scientists who question the overall public health benefit of lockdowns and vaccine mandates.

The offices of Trudeau, Transport Minister Omar Alghabra, and the Privy Council Office didn’t reply to requests for comment on the diversity among Freedom Convoy supporters calling for an end to mandates and restrictions.

Alghabra told Rosie Barton on CBC News on Jan. 30 that the government would be working on introducing inter-provincial mandates.

That’s despite Canada’s top doctor, Theresa Tam, saying on Feb. 4 that all COVID-19 policies, including provincial vaccine mandates, need to be “reexamined,” as the virus will be around for years to come.

A new study out of Johns Hopkins University found that global pandemic lockdowns only prevented 0.2 percent of COVID-19 deaths and were “not an effective way of reducing mortality rates during a pandemic.”

Singh says he supports the Great Barrington Declaration, a statement co-authored by epidemiologists at Harvard, Stanford, and Oxford universities that calls for an alternative approach to the pandemic. Their plan involves “focused protection” of those most at risk and seeks to minimize the societal harm of COVID-19 lockdowns, which the doctors say hurts the lower classes of society the most.

In early 2022, a quarter of adult Canadians reported feeling moderate to severe levels of depression, anxiety, and loneliness—the highest levels since the onset of the pandemic—according to a survey by Centre for Addiction and Mental Health. A meta-analysis study out of the University of Calgary found that global rates of severe depression and anxiety in youth have doubled since March 2020.

Adding to mental health burdens, almost 560,000 fewer surgeries were performed over the first 16 months of the pandemic compared with 2019, according to the Canadian Institute for Health Information.

From March 2020 to early September 2021, there were an estimated 20,994 excess deaths in Canada, or 5 percent more deaths than would be expected were there no pandemic, according to Statistics Canada.

Small businesses have also been severely affected by COVID-related lockdowns and restrictions. The Canadian Federation of Independent Business estimated last year that 239,000 small businesses could permanently close by the end of the pandemic.

Ginny Bruneau, a Cold Lake First Nations woman based in Edmonton, said she made the trip to Ottawa on Jan. 29 to stand up for human rights and for indigenous rights.

Bruneau said she met protesters from every province and every background, including the vaccinated and unvaccinated, along with many different First Nations people who were also protesting Trudeau’s failed promise of providing clean drinking water on reserve lands.

“I never saw one Nazi flag there and no racism at all,” she said. “As a matter of fact, I saw the opposite. I’ve never seen such camaraderie and Canadians from all over coming together.”

She questions why the government and media have neglected to discuss early treatments for COVID-19. Bruneau said that taking vitamins C and D, along with zinc and a plant-based anti-inflammatory called quercetin helped her quickly recover from the disease.

“Even for people who’ve taken the jab, we can’t take a one-medicine-fits-all approach to treating COVID,” she said.

While the World Health Organization has stated that vitamin and mineral supplements can’t cure COVID-19, thousands of dissenting physicians say they’ve successfully treated patients with the same supplements that Bruneau used, along with other controversial therapeutics.

Doctor groups such as the Front Line COVID-19 Critical Care Alliance and the Canadian Covid Care Alliance have repeatedly been denounced in the media and by the global medical community for promoting the anti-parasitic drug ivermectin as a COVID-19 treatment.

Bruneau says she’s lost trust in the government and the media because physicians and scientists who question the universal vaccination strategy are being unfairly silenced.

Pack Up and Leave

He said in an email statement that the majority of the trucking industry isn’t involved in the protest in Ottawa. The PMTC is calling on remaining demonstrators to pack up and leave.

“Your message has been heard. The people of Ottawa should be allowed to get back to their lives,” he said.

The trucker protest comes as the industry has already been dealing with a shortage of drivers and the country faces supply chain disruptions and 30-year-high inflation rates.

The Trudeau government has been undermining the potential disruption to the industry and supply chains, says Millian.

The PMTC estimates that the federal vaccine mandate will remove an additional 15 to 20 percent of the driver workforce.

While Trudeau and the media have repeatedly claimed that 90 percent of Canadian truckers are vaccinated, Millian questions the accuracy of that figure. The statistic comes from the high-end estimate issued by the Canadian Trucker Alliance (CTA), which represents just 4,500 of the total estimated 120,000 Canadian truckers.

The CTA didn’t provide a statement to The Epoch Times about how it arrived at its estimate.

Millian says a more accurate estimate is about 75 percent of Canadian truckers are fully vaccinated, according to a PMTC survey of 70 trucking companies conducted Jan. 17 to 19.

He points to government data that shows a 10 percent drop in commercial truckers crossing the border just in the first week of the vaccine mandate.

On Feb. 6, Ottawa Mayor Jim Watson declared a state of emergency over the trucker convoy, citing “serious danger” from protesters.

The Justice Centre for Constitutional Freedoms, the legal representatives for the convoy organizers, immediately countered Watson’s claim, saying he has no basis for calling a state of emergency.

The JCCF said the mayor hasn’t divulged publicly how the truckers are posing “a danger of major proportions,” and the protesters have been law-abiding since arriving in Ottawa on Jan. 29.

Meanwhile, Ottawa police said that anyone attempting to bring supplies such as gas to the demonstrators after midnight on Feb. 7 could be subject to arrest. Protesters on the ground have said on Twitter that a larger police presence has begun to move in to seize major fuel supplies.

Protest organizer Tamara Lich wrote in a Feb. 6 tweet that Ottawa police will effectively be “starving truckers and their families” if they cut off fuel and supplies.

After the Freedom Convoy 2022 raised almost $10 million CAD ($7.9 million USD) on GoFundMe, the fundraising platform ended the campaign on Feb. 4 after releasing only $1 million. GoFundMe cited a violation of its terms of service and said it gathered evidence from law enforcement of “violence and other unlawful activity,” later tweeting that the remaining $9 million withheld would be transferred back to donors.

Protest organizers quickly pivoted on Feb. 4 to launch a new campaign on the Christian fundraising site GiveSendGo, which had amassed over US$4.3 million as of the morning of Feb. 7.

A group of Ottawa residents has filed a $9.8 million class-action lawsuit against truck protesters, citing damages of $4.8 million for “private nuisance” and $5 million for “punitive damages” related to “excruciatingly loud” honking.

For Concordia University professor Smith, politicians and media need to tone down the rhetoric that is dividing Canadians.

“I can’t be the only one who finds it disturbing that our own prime minister seems to suggest that people of color and women don’t want to be free and don’t like freedom. I don’t get that. I don’t know why that’s acceptable for him to be implying.”