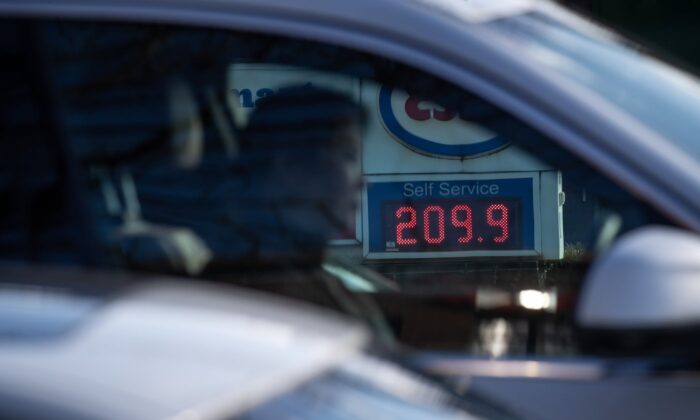 A sign displays the price of a litre of regular grade gasoline at an Esso gas station as a motorist waits at a red light, in Vancouver, on March 8, 2022. (The Canadian Press/Darryl Dyck)
Canada

A new poll suggests Canadians are looking for ways to cut back on spending as their concerns about the cost of living rise alongside headline inflation rates.

Four-fifths of respondents to the Leger poll had started or planned to buy cheaper items at the grocery store to save on food bills, and cut back on how much food they throw out to stretch every dollar.

Some three-quarters of respondents told the firm they planned to cut spending on household items and eat from local restaurants less frequently.

About one in two were already using their vehicles less to save on gasoline as prices at the pumps get pushed ever higher and a further one in five respondents planned to do the same in the near future.

Almost one-third were looking at buying an electric vehicle.

Overall, four-fifths of respondents said inflation was having a serious impact on their households, and the financial squeeze may only worsen as inflation rates are expected to go even higher.

The poll of 1,515 Canadians was taken between March 11 and March 13, but cannot be assigned a margin of error because online panels are not considered truly random samples.

Statistics Canada reported this week that the annual inflation rate in February was 5.7 percent, a year-over-year increase in the consumer price index not seen in 31 years.

The headline rate is expected to rise closer to six percent by the time March’s figure is calculated as Russia’s unprovoked invasion of Ukraine spikes global prices for oil and wheat.

RBC Economics estimates that higher oil prices could cost Canadian households about $600 more per year, or $10 billion overall, to buy the same amount of gasoline that they did just a few weeks ago.

Hit hardest will be low-income households that typically spend a larger share of their income on necessities like food and energy.

“For them, increased costs will be largely unavoidable,” the RBC report said. “With government pandemic supports rolling off, any accumulated pandemic savings will quickly erode.”

Planning to drive less may only help at the margins of household finances, Bourque said, noting suburban workers will still have to commute as more employers push ahead with return-to-office plans.

He said there could also be negative effects on public health if, as the poll suggests, Canadians eschew higher priced fruits and vegetables for less healthy, but less expensive, options.

The health of household finances is also of concern, Bourque said.

While two-thirds of respondents to the Leger poll said their household finances were in good shape, almost as many noted that their earnings hadn’t kept up with the pace of price increases, creating a gap in purchasing power.

“Something has to give,” Bourque said.

“For me, the biggest worry is how will that, in fact, influence people’s capacity to pay all of their bills.”

In a bid to tame inflation rates, the Bank of Canada this month raised its key interest rate to 0.5 percent, marking the first hike since it slashed the trendsetting rate to an emergency low at the onset of the pandemic.

Governor Tiff Macklem foreshadowed more hikes to come, and economists expect the next jump to land in mid-April at the bank’s next scheduled interest rate announcement.

By raising rates, the cost of borrowing goes up, and may cool consumer demand for a variety of goods, including homes and cars, as well as the pace of price increases.

In its updated outlook this week, TD Economics forecasted that inflation rates should gradually slow over the course of this year, but likely won’t get to the central bank’s two percent target until the middle of next year.

Almost nine in every 10 respondents to the Leger survey expected interest rates to rise, with one-third of those expecting significant jumps over the next six months.

Among respondents, almost two-thirds said rising interest rates would be a serious problem for their household to manage.