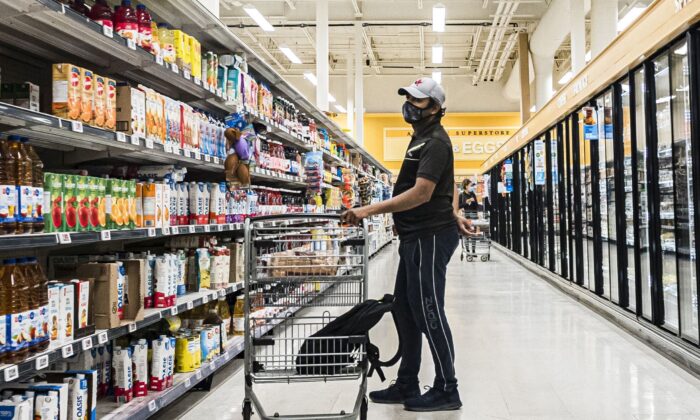 A man shops at a grocery store in Moncton, New Brunswick, on Sept. 22, 2021. (The Canadian Press/Christopher Katsarov)
Canada

Rising food prices have caught the attention of Canadians, leading to less meat consumption and a more careful approach to shopping. Meanwhile, one academic says Statistics Canada may be underestimating how much food inflation has taken place.

Even if Statistics Canada’s estimates are on the conservative side, the increase is still substantial. The agency reports that meat prices have risen about 10 percent in the past six months, while the price of groceries has risen 8 to 10 percent over that time.

However, Sylvain Charlebois, director of the Agri-Food Analytics Lab at Dalhousie University in Halifax, says the increase could be even higher.

“Currently, Statistics Canada could be underestimating the food inflation rate by at least 1.5 percent, if not more,” he said in a commentary published Sept. 22. “A 1.5 percent increase for an average family of four would represent approximately $180 to $200 worth of food each year.”

To find out how price increases might have affected consumers’ shopping over the past six months, Charlebois’s lab partnered with Caddle to survey 10,005 Canadians in summer 2021.

Nationally, 49 percent of respondents said they bought less meat due to higher prices, with Albertans having the greatest drop at 57 percent.

The practice of “shrinkflation,” where companies maintain prices but sell food in smaller amounts or packages, was noticed by 73.5 percent of Canadians.

Charlebois told The Epoch Times that smaller packaging may lead to less food being wasted, but shoppers don’t like the practice.

“It bothers people,” he said. “[Companies] are selling you the illusion that you’re buying the same thing, but you’re not.”

Charlebois says forest fires in B.C. and on the U.S. Pacific Coast region mean those prices are sure to rise.

“Produce is going to be impacted, nuts are going to impacted, because we do import a lot of nuts and fruits and vegetables, especially fruits from California,” he said.

“That could actually impact availability and affordability. Importers would probably go elsewhere to find some of these products, but again, those other options may be more expensive.”

In his commentary, Charlebois wrote that although the agency accounts for “shrinkflation,” “about 70 percent of products in its food basket have quantities which no longer exist in the market,” which suggests the need for an update.

“The federal agency provides details around its process and reporting, but it never discloses what brands it looks at, what stores, or how the data is being processed in Ottawa,” he wrote.

“Some of the data capturing process needs work and certainly more transparency. Statistics Canada claims it changes its food basket constantly, but it still only monitors baked beans as a vegetable protein-based product. For fish and seafood, canned salmon is basically it.”

Statistics Canada communications officer Maryse Carrière explained in an email that “food prices are now mostly captured using weekly scanner data collected directly from grocery retailers across Canada … and include sales and promotions where applicable,” noting that 17,000 prices are captured from those retailers.

“Representative products, which are a narrow class of items for which the average price change is expected to be representative for a similar group of products, are added and removed each month as food products appear and disappear from the market,” Carrière wrote.

“Prior to the pandemic, food prices were also collected by interviewers visiting stores; however, this is now replaced by online prices using store websites or flyers.”

Charlebois thinks the agency needs to revisit its methodology because “market conditions have changed over time—they’re much more volatile than before.”

“I wouldn’t question StatsCan’s good faith, [but] their data collection process may not accurately capture what is actually going on,” he said.