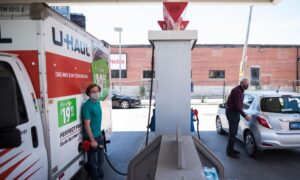 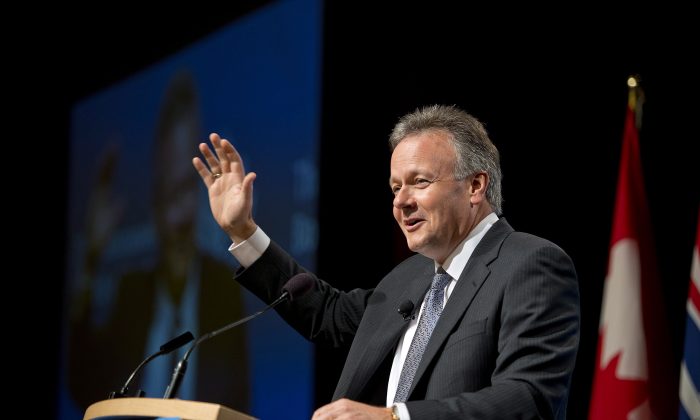 Bank of Canada Governor Stephen Poloz speaks to the Vancouver Board of Trade in Vancouver on Wednesday, Sept. 18, 2013. (The Canadian Press/Jimmy Jeong)
Canada

VANCOUVER—The head of the Bank of Canada gently urged businesses to ease open the purse strings and start spending Wednesday, as he said the economy was nearing a tipping point toward normal growth following the global recession.

“When the bubble burst in 2008, we were left with a crater, which is where we now find ourselves,” Poloz told more than 600 members of the Vancouver Board of Trade.

“If you look carefully at a pot of simmering spaghetti sauce, under every bubble there is a crater that’s equal in size. So a seven-year bubble, a seven-year crater. Central banks have been filling that crater with liquidity, so we can row our boats across it. We need to make sure we’re getting to shore and not just hitting a rock.”

Poloz said the economy is poised to return to normal, self-sustaining growth—gathering momentum in foreign demand, in particular from the U.S.

Doug Porter, chief economist of BMO Capital Markets, said Poloz’s speech appeared designed not to rock markets ahead of an announcement from the U.S. Federal Reserve.

“He certainly wasn’t scolding, like the former governor occasionally did on that topic. I think it was more like gently trying to encourage,” Porter said.

The U.S. Federal Reserve surprised markets and observers Wednesday by announcing that it would hold off on slowing its US$85-billion-a-month bond buying program until it saw more conclusive evidence the economic recovery will be sustained.

The Fed said the economy was growing moderately and some indicators of the labour market have improved, but rising mortgage rates and government spending cuts were restraining growth.

“Conditions in the job market today are still far from what all of us would like to see,” Fed Chairman Ben Bernanke said at a press conference after the announcement.

Unemployment stands at 7.3 percent, and at least until it drops to 6.5 percent, the Fed plans to keep its key short-term rate near zero.

“So the American economy is growing, it’s growing modestly, that’s good for our economy here in Canada.”

Household debt has been considered by the Bank of Canada as a key domestic risk to the recovery of the economy.

Asked about housing prices in Canada and the record high ratio of debt-to-household income, Poloz reiterated he does not believe there is a housing bubble.

“I do think that people understand where they are, they understand what their exposure is,” he said at a news conference following his speech.

“I’m comfortable that as our forecast unfolds, income will be growing faster than consumer debt and therefore the ratio … will be declining through time.”

Interest rates were cut to stimulate the economy during the recession, and that results in more debt—particularly in the household sector, he said. That poses a risk that the debt load will go further than hoped.

“I would say we were more concerned about that a year ago, but things have calmed noticeably,” Poloz said.

Income growth and slower growth in credit will accompany any interest rate increases, he said.

Poloz was also buoyed by the sign that the number of Canadian companies was growing, something that was stagnant in the wake of the financial crisis and recession.

He said there were some 40,000 more firms with at least one employee than there were this time last year, and the pace of growth was stronger than would be expected in normal, non-recessionary times.

Canadian economic growth is expected to pick up in the third quarter following a weaker-than-expected second quarter that was hit by flooding in Alberta and a construction strike in Quebec.

In its July monetary policy report, the bank forecast growth averaging 1.8 percent this year thanks to a stronger first quarter. It sees growth of 2.7 per cent in 2014 and 2015.