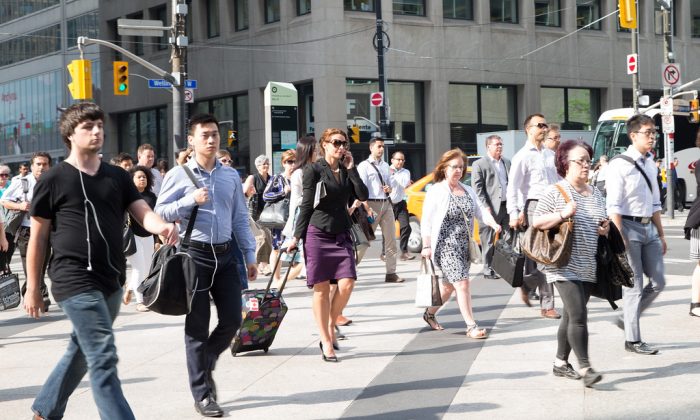 People head to work in Toronto on the morning of July 14, 2015. A new survey suggests many Canadians are pessimistic about their financial futures and expect to work longer than originally planned before retiring. (Photo by Don Quincy)
Canada

Many expect having to work longer than originally planned, payroll survey finds
By The Canadian Press

MONTREAL—A new survey suggests many Canadians are pessimistic about their financial futures and expect to work longer than originally planned before retiring.

According to the survey, released by the Canadian Payroll Association, three-quarters of working Canadians polled reported having put aside less than 25 percent of the money they expect to need in retirement.

And it says less than half of people even 50 and older have reached that threshold.

According to the survey, the average expected retirement age has risen to 63, up from 58 five years ago.

More than one in five employees surveyed said they will need to work four years or more than they originally expected before retiring, citing a lack of sufficient savings as the main reason.

“They are not sounding very promising of what (their) future is going to look like,” said association vice-chairwoman Lucy Zambon.

She said the outlook depends on individual circumstances but saving for the future is a key factor that can be helped by automatic deductions from paycheques to a savings plan or retirement program.

Although about half of workers expect to need more than $1 million for retirement, 47 percent are putting away just five percent or less of their net pay. That’s well below the 10 percent minimum savings rate recommended by financial planning experts, the association said.

According to the survey, the average expected retirement age has risen to 63, up from 58 five years ago.

Almost half of Canadians polled said they are living paycheque to paycheque and would find it difficult to meet their financial obligations if their pay was delayed by just a week. The situation is worst in Ontario, British Columbia, and Atlantic Canada.

Less than one quarter of respondents said they could probably not come up with $2,000 if an emergency arose within the next month. Some 36 percent of working Canadians said they felt overwhelmed by their level of debt, and 12 percent doubted they’ll ever be debt-free.

Overall, the survey results are stable from last year, but suggested that employees are losing confidence in the economy. Just 33 percent expect it to improve in the next year, down from an average of 41 percent over the past three years. The percentage of those who feel it will worsen has increased 10 percentage points to 27 percent.

The countrywide online survey of 3,065 employees from a variety of industry sectors was conducted between June 29 and Aug. 7 by market research and strategic planning firm Framework Partners. The polling industry’s professional body, the Marketing Research and Intelligence Association, says online surveys cannot be assigned a margin of error because they do not randomly sample the population.