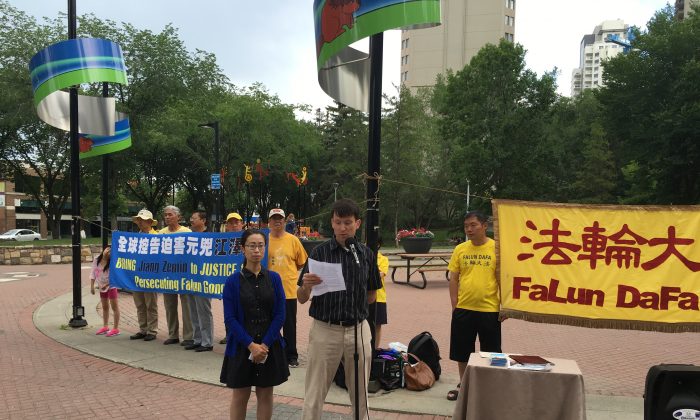 Jay Brauneisen, an Edmonton resident whose mother-in-law, Huixia Chen, has been detained in China for her practice of Falun Dafa, speaks at a rally calling for her release on June 30, 2016 in Edmonton, while his wife Hongyan Lu, Chen’s daughter, looks on. (Omid Ghoreishi/Epoch Times)
Canada

EDMONTON—An Edmonton woman is worried for her mother who she believes has been arrested in China and whose whereabouts is unknown.

Falun Dafa is a traditional meditation discipline that was practiced freely by tens of millions in China before former Chinese leader Jiang Zemin cracked down on the practice in 1999 due to its great popularity, exceeding the number of Communist Party members.

Jiang launched a brutal campaign of persecution against the practice, including detention in forced labour camps, torture, death, and forced removal of organs from living Falun Dafa adherents to sell for profit.

My biggest concern is her becoming a target of organ harvesting.
— Hongyan Lu

Lu says her mother travelled from her home city of Linyi in Shandong Province to Shijiazhuang in late May to visit fellow Falun Dafa practitioners. The family hasn’t had contact with her since May 30.

According to Lu, Chen was among nine Falun Dafa practitioners arrested sometime between May 30 and June 3, as confirmed by a relative of one of those who was arrested.

She says her relatives in China have been unable to trace her mother, with authorities claiming there’s no one by her name in their custody. Lu says her mother doesn’t carry any identification information with her, and as is typical with many Falun Dafa practitioners, is likely refusing to provide identification information to the police to avoid bringing trouble to her family and relatives.

This is not the first time Chen has been arrested for her practice of Falun Dafa. In 2003, she was detained for about three months, and was only released after her husband, Lu’s father, bribed the police to the tune of 30,000 yuan (about C$6,000) and treated several police and government officials to meals at luxury restaurants.

Even after her release, the harassment of the family continued at the workplace, to the point that Lu says her father was “forced to divorce my mother when he couldn’t take the pressure of persecution anymore.”

Lu says she is particularly worried that her mother may become a victim of organ harvesting.

Kilgour and Matas, who released their first forced organ harvesting report in 2006, released an updated report last week along with American investigative journalist and author Ethan Gutmann, showing that the number of victims of organ harvesting is far larger than originally suspected.

“My biggest concern is her becoming a target of organ harvesting. The latest update from David Kilgour, David Matas, and Ethan Gutmann reveals how much more brutal this practice is than we first thought,” Lu said.

“I am really worried about her safety since we have lost contact with her for almost a month now.”

Lu’s husband, Jay Brauneisen, says he was never able to meet his mother-in-law because as a Falun Dafa practitioner she was denied a passport and couldn’t even come to Canada to attend their wedding.

“I’m concerned for her safety and can’t help feeling we did not do enough to help her in a tough situation,” says Brauneisen.