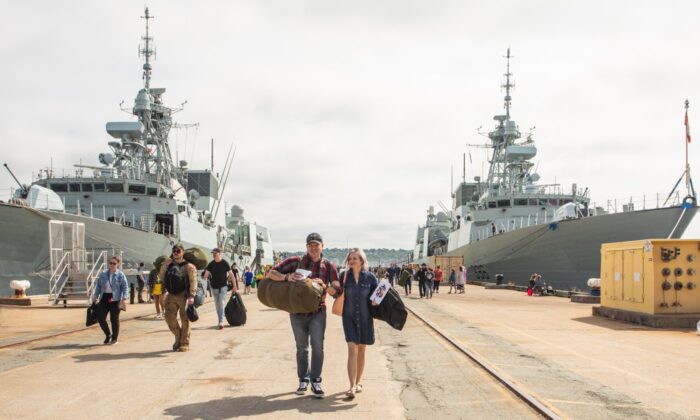 Returning sailors and their family and friends are seen as the HMC Ships Halifax and Montreal return from deployment to NATO's Operation Reassurance at the HMC Dockyard in Halifax on July 15, 2022. (The Canadian Press/Kelly Clark)
Canada

For the first time in eight years, Canadian warships are not involved in either of two NATO naval task forces charged with patrolling European waters.

Canada had been a consistent presence in the naval groups since 2014, deploying at least one Halifax-class frigate to protect and defend the North Atlantic and Mediterranean.

The federal Liberal government made a point of deploying a second of the warships earlier this year as part of its response to Russia’s invasion of Ukraine.

But Defence Department spokeswoman Jessica Lamirande says Canada does not have any frigates attached to either of the naval groups after HMCS Montreal and Halifax returned last month.

Lamirande says the decision not to send any new frigates follows the move to deploy two ships to the Asia-Pacific region, and also due to the fleet’s maintenance and training requirements.

But experts say the lack of Canadian frigates in Europe demonstrates the trade-offs that Canada is having to make with its navy, which is struggling with a shrinking fleet of aging ships and a lack of trained sailors.