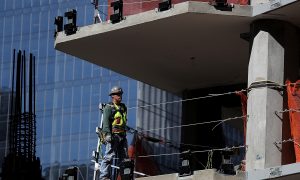 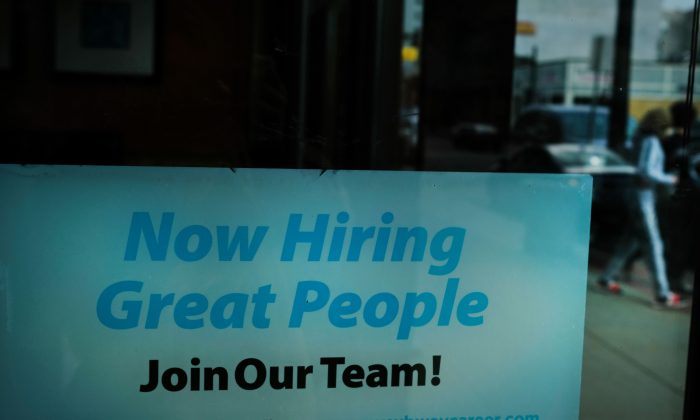 Canada lost 24,200 jobs last month and its unemployment rate moved up to 5.7 percent to give the economy its weakest three-month stretch of job creation since early 2018. (Spencer Platt/Getty Images)
Canada

OTTAWA—Wage growth accelerated last month to its fastest clip in more than decade, according to numbers released Friday from Statistics Canada.

The 4.5 percent burst came in a month that also produced less-positive data: the unemployment rate moved up to 5.7 percent as Canada shed 24,200 jobs.

The increase in wages—as measured by year-over-year average hourly wage growth for all employees—marked the indicator’s strongest month since January 2009.

The reading, one of several wage measures closely watched by the Bank of Canada, was 3.8 percent in June and 2.8 percent in May. In Quebec, wage growth sped up to nearly 6.2 percent, while Ontario’s number was 5.1 percent.

In terms of job creation, the economy saw its weakest three-month stretch since early 2018. Canada had been on a healthy run of monthly employment gains that began last summer.

The survey found the numbers were nearly flat between May and July, a period that saw Canada add an average of 400 jobs per month. The agency cautions, however, that the recent monthly readings have been small enough that they’re within the margin of error and, therefore, statistically insignificant.

Even with the July decline, compared to a year earlier, the numbers show Canada added 353,000 new positions—almost all of which were full time—for an encouraging overall increase of 1.9 percent.

“Unlike the relatively hot (gross domestic product) figures of late, the employment ’three-peat’ is one of effectively zero net job gains since April. This is concerning at first glance, but we should remember that this pause in job growth is coming on the heels of a string of robust gains earlier in the year.”

The July unemployment rate remained near historic lows even after edging up to 5.7 percent from 5.5 percent in June. The rate was 5.4 percent in May, which was its lowest mark since 1976.

The Canadian dollar dropped after Statistics Canada released the numbers, but started to regain lost ground.

Youth employment fell by about 19,000 positions, pushing the jobless rate up 0.7 percentage points to 11.4 percent.

The number of positions for core-aged women—between 25 and 54 years old—dropped by about 18,000.