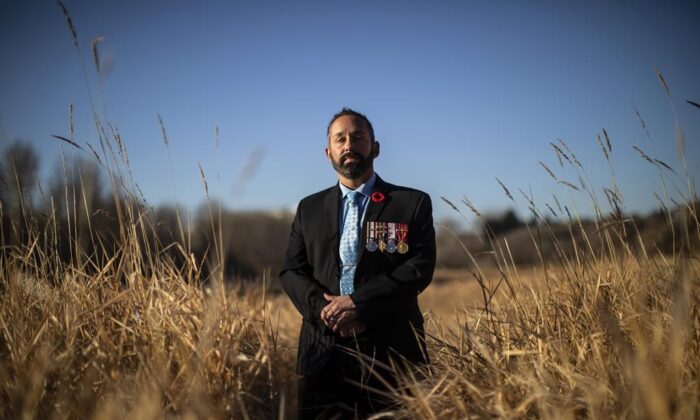 Stephen Peddle poses in St. Albert, Alta. on November 10, 2021. Peddle recently retired from a 28-year career with the Canadian military after assisting interpreter Sangeen Abdul Mateen and his family to come to Canada. (The Canadian Press/Jason Franson)
Canada

This Remembrance Day, the first since Afghanistan fell to Taliban forces in the summer, will be difficult for Canadians who fought in the Middle Eastern country, says a veteran who served two missions there.

Stephen Peddle, a Canadian Forces retired major, has been working to get some families of Afghan interpreters to safety.

“Their target list is very real, and they have a very savvy way of finding people who were fighting against them all these years.”

In August, the Taliban overran the capital city of Kabul and seized control of Afghanistan. By the end of the month, the United States and its Western allies withdrew from the country.

Troops spent a harrowing two weeks protecting the airlift of tens of thousands of Americans, Canadians, Afghans and others trying to escape.

Peddle, who lives in St. Albert, Alta., northwest of Edmonton, says he knew the families of people he worked with in Afghanistan were in danger and he felt he had to help them get out.

The 47-year-old worked in intelligence for the Canadian military and was deployed to Afghanistan in 2007 and in 2012.

During his first mission, he was embedded with Afghan soldiers for six months. He became friends with his interpreter, Sangeen Abdul Mateen, who was about 20 years old at the time.

Peddle was able to help Mateen immigrate to Canada in 2012. The now 34-year-old lives in the Toronto area with his wife and four children. He studied to become an electrician and started his own company.

But many of Mateen’s family members remained in Afghanistan, including his father, who was a high-level military officer.

Mateen says he became worried for their lives when there were signs the Taliban were going to take over Kabul.

He says the Taliban would cut off telecommunication networks at certain times of the day, so he spent weeks staying up all night to be able to speak with his family and co-ordinate an escape to Canada.

“Sometimes in the middle of the night, like 2 a.m. or 3 a.m., I would just have to send an email to Stephen and he would reply back within a minute,” Mateen says.

“I thought I was the only one awake all night worrying about my family, but I was not.”

Mateen says other veterans also helped him and he was reunited with 12 of his family members, including his parents, after almost a decade.

“Words can’t explain how happy I was.”

His youngest brother was able to flee to a neighbouring country with his wife and children. Mateen and Peddle are trying to get him to Canada as well.

Peddle says many veterans feel that Afghans like Mateen should also be remembered for their contributions in the war.

“These are good people, who put their lives on the line when we were there in their country, and they took great care of Canadian soldiers, NGOs and anyone else over there trying to help them secure a future for Afghanistan.”

Peddle says the Taliban takeover is not only difficult for Afghan refugees, but Canadian soldiers who risked their lives in the 13-year war.

“As an Afghan veteran, each Remembrance Day has held special significance because there are folks who were close to me who are no longer walking this Earth because they went to Afghanistan,” Peddle says.

“Seeing what happened this past year, it does feel like taking three steps back We did sacrifice greatly for over a decade in combat operations, and to see the country fail is not an easy pill to swallow as a veteran.”

To stay positive, Peddle has teamed up with the Order of St. George, which has started a campaign with the Toronto-based True Patriot Love Foundation to raise money to help relocate Afghan interpreters and support the mental health of veterans.

Allan Plett, knight commander and prior of the Order of St. George Cascadia Priory, says he will be knighting Peddle at a ceremony in Burnaby, B.C., this weekend.

“He is highly honourable? and the chivalric principles of charity, service and courage – he meets those and exceeds them.”