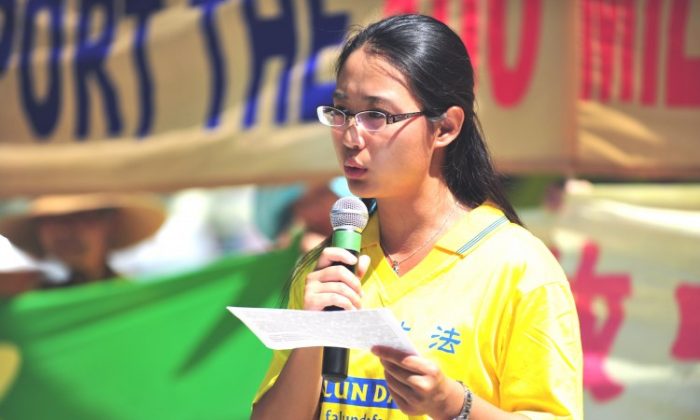 Sonia Zhao gives a speech about the persecution of Falun Gong in China at a rally in Toronto in August 2011. Zhao, a former instructor at the Confucius Institute at McMaster University, had to sign a statement promising not to practice Falun Gong when she was in China before joining the institute. McMaster has now decided to close the institute over concerns about its hiring practices. (Gordon Yu/The Epoch Times)
International

McMaster University has decided to close the Confucius Institute that it has hosted since 2008, the Hamilton, Ontario-based university announced Feb 7.

The decision was made because of the hiring practices of the Beijing-linked Confucius Institute (CI), which recruits its instructors in China.

“Hiring decisions in China were not being done the way we would want to do the hiring,” Andrea Farquhar, assistant vice president of public and government relations at McMaster, told The Epoch Times.

The Epoch Times reported in 2011 that Sonia Zhao, a Chinese woman who came to work at the McMaster CI, was required to sign a statement promising not to practice Falun Gong (also known as Falun Dafa), a spiritual meditation discipline persecuted by the communist regime in China.

Farquhar would not confirm that the university’s decision to close the CI was made because of the Zhao’s case, but said it was based on the “overall situation.”

“We had raised some concerns that the hiring practice is not how we act as a university,” she said.

As an example, she said, “anyone who has a certain point of view should be respected. … We respect the right of people who hold various points of view.”

Lucy Zhou, a spokesperson with the Falun Dafa Association of Canada, says she is happy with the university’s decision to close the CI.

“We are very encouraged to see that McMaster University is attempting to correct a mistake they made when they invited the Confucius Institute to their university without realizing their discriminatory practices against Falun Gong in their hiring practices,” Zhou says.

“The illegal persecution of Falun Gong is ruthless and permeates all facets of the society in China, including the education system. This kind of discrimination imported into Canada is a serious violation of human rights.”

Sonia Zhao, who has since been granted refugee status in Canada, was also pleased with McMaster’s decision.

“It is great news and it is encouraging. The persecution of Falun Gong should not happen in China, and of course not in Canada,” she says.

“I hope other universities will take similar steps.”

Funded by the communist regime in China, the CIs are branded as promoting Chinese language and culture, with hundreds of branches worldwide. They have been cited by intelligence agencies as organizations used by the regime to extend its “soft power.”

Richard Fadden, the head of Canada’s intelligence agency CSIS, has said that CIs are under the control of Chinese embassies and consulates and has linked them with some of the regime’s other efforts to influence Canada’s China policy.

The Epoch Times first reported in 2011 that a stipulation published in English on CI’s main website requires that instructors must have “no record of participation in Falun Gong.”

Rights activists and lawyers have said that the requirement violates human right codes in Canada, especially if the instructors are recruited to come and work in Canada.

The Falun Dafa Association of Canada first took its concerns about the CI’s hiring practices and Zhao’s case to McMaster. According to the association, they received a letter from the university president acknowledging the severity of the concerns.

As the university did not take any further steps at that time, Zhao, who left the CI in 2011, filed a case with the Ontario Human Rights Tribunal (OHRT) last September.

In its response to the OHRT case, McMaster had argued that since Zhao signed the agreement with Hanban, the organization overseeing CIs in China, the tribunal has no jurisdiction over the issue.

Human rights lawyer David Matas, who represents Zhao in the case, said that argument doesn’t hold as the CI is not an autonomous entity.

“The reality is that the Confucius Institute is part of McMaster,” Matas said. “Hanban isn’t really running—what they’re doing is just tying [down the instructors].”

Institute to Be Closed This Summer

According to a McMaster statement, the university has given official notice that the CI will be closed once the current term is completed this summer.

The CI at McMaster was developed in conjunction with the Beijing Language and Culture University (BLCU). The statement said McMaster had held “numerous discussions” with BLCU officials to achieve a possible solution to its concerns. However, no satisfactory resolutions were found.

“Both senate and the board of governors have been updated on the university’s intention to withdraw from the agreement as of July 31, 2013.This will ensure that no further instructors are selected for McMaster and that students who take programs through the Institute are able to complete their current sessions,” the statement said.

“The University is looking at options to gauge ongoing community interest in Chinese language courses at the postsecondary level.”

Other schools and organizations hosting Confucius Institutes in Canada include Brock University, British Columbia Institute of Technology, University of Sherbrooke (in partnership with Dawson College), University of Waterloo, the Toronto District School Board, University of Regina, Edmonton Public Schools, and the New Brunswick Department of Education.

Zhou says she hopes these education bodies will follow McMaster’s example and close their CIs.

“Importing discrimination against Falun Gong or any other group into Canada is not acceptable and should not be imported into Canada via our Canadian education system.”