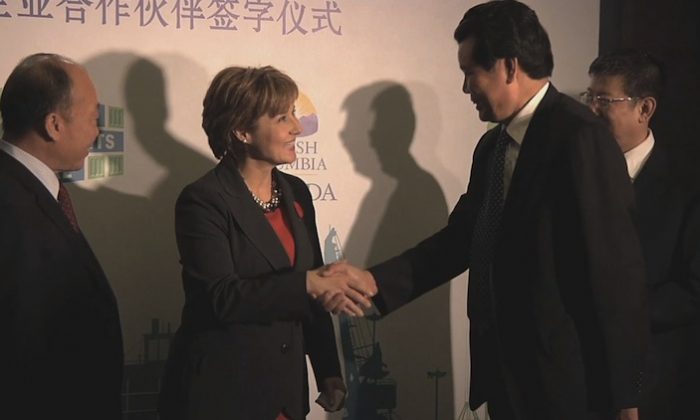 During a trade mission to China in November 2011, premier of British Columbia, Canada, Christy Clark announced a $1.36 billion infusion of Chinese capital for new projects in the province's coal mining industry. Controversy is growing regarding a plan to use Chinese nationals to work in four new coal mines being developed by Chinese-backed companies in the northeast of the province. (Government of British Columbia)
US

A group that represents more than 50 labor unions in British Columbia, Canada, is wading into the growing controversy surrounding a plan to use foreign labor in four new coal mines in the province. Chinese-backed companies are developing the mines, and temporary Chinese workers are slated to help operate them.

On Monday, British Columbia Federation of Labor President Jim Sinclair called on the provincial government to suspend hundreds of temporary work permits for the Murray River coal project due to questionable recruitment methods.

Sinclair alleges jobs were not sincerely offered to Canadians. He said recruitment companies are charging Chinese miners exorbitant illegal fees to work in Canada, and wages offered to the temporary workers are well below Canadian wages.

“We understand the jobs weren’t advertised fairly at going wage rates to workers in Canada,” Sinclair wrote in a letter to British Columbia Jobs Minister Pat Bell. “We are confident that no effort has been made to train workers locally. And now we learn that recruiters are asking prospective Chinese miners to pay a modern-day head tax.”

The project is owned by Vancouver-based HD Mining International, in partnership with Huiyong Holdings (BC) Ltd., and Canadian Dehua International Mines Group Inc.

In the coming years, the companies plan to open a total of four underground coal mines in British Columbia and bring in up to 2,000 Chinese nationals to work them. The first dozen approved under Canada’s Temporary Foreign Worker program are to arrive by the end of the month.

HD Mining and British Columbia’s provincial government say the Chinese workers are needed because of a shortage of skilled labor in Canada, as well as a lack of Canadians trained in the particular long-wall style of mining used in the Murray River project.

But Steve Hunt, Western Canada director for the United Steelworkers Union, says this argument is a red herring and an excuse to exploit cheap labor from China.

“We’ve long-wall mined in this country before, and we’ll do it again. It’s just a different process in mining. It’s not complicated—it’s a different set of equipment,” he said.

Hunt notes that the United Steel Workers, which has over 225,000 members in Canada, was not contacted by HD Mining during the recruitment process.

“I’ve had calls and emails from people that have applied for jobs at this mine and didn’t get a response,” he said.

However, HD Mining says it met federal government requirements both to recruit Canadians first and to offer competitive wages.

“There were about eight or nine different publications that we advertised the jobs in,” said Jody Shimkus, a spokeswoman for HD Mining.

“We advertised for these jobs and we did not get experienced Canadian long-wall miners interested in these jobs, if they do in fact exist,” Shimkus adds.

“We have to satisfy the federal government that we have made efforts to recruit and employ local Canadians before they will give us the labor market opinion and approve the temporary foreign workers.”

The provincial government has said the Chinese jobs will be temporary—lasting just a six- to eight-month period while the initial exploration takes place.

“[British Columbia’s] government is committed to making sure that if these mines are found to be viable, British Columbians will be able to do the jobs that will be created in Northeast [British Columbia],” says an Oct. 16 press release from Premier Christy Clark’s office.

During a trade mission to China in November 2011, Clark announced a $1.36 billion infusion of Chinese capital for new projects in the province’s coal mining industry, which would eventually result in 6,700 new jobs.

Last week the British Columbia New Democratic Party (NDP) called on Clark to release details of trade agreements she made during the mission and provide evidence that any deals made in Beijing promised jobs to British Columbians first.

The NDP says a two-page meeting note related to the November 2011 meeting in Beijing with HD Mining shows Clark was aware that the company intended to supply half of the workers for the Murray River project with its own staff.

“The premier talks a big game with her so-called jobs plan, and that was the thrust of her trip to China. But it has become clear there was always a plan for this mining company to bring their own workers into [British Columbia] to work in their coal mines,” said NDP labor critic Shane Simpson.

According to news reports, Bell said Tuesday his ministry will investigate the complaint that Chinese workers are being asked to pay illegal fees to work on the Murray River project.