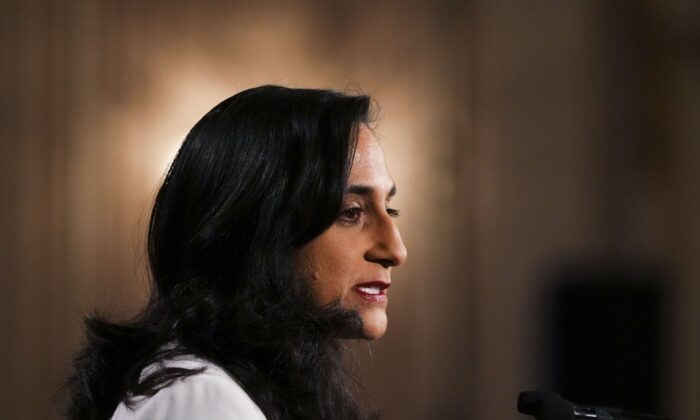 Members of the Canadian Armed Forces have been banned from joining the thousands of foreigners who have flocked to Ukraine in recent weeks to help fight Russia’s invasion.

“So for current CAF members, they are not permitted to be in the area, even if they were to be on leave,” Allen told the committee as she appeared alongside Defence Minister Anita Anand.

The only exception is if their presence in Ukraine is specifically approved by Eyre, Allen added. She did not indicate whether any Canadian troops are currently in Ukraine.

Canada currently had 250 military trainers in Ukraine, but the federal government said they were withdrawn to neighbouring Poland shortly before Russian forces invaded the country.

The government said those troops were re-tasked with providing humanitarian support, but Anand did not give the committee an update, citing operational security.

Last month, Ukrainian President Volodymyr Zelenskyy called for the creation of an “international brigade” to help fend off a Russian invasion that began Feb. 24.

Thousands of foreigners have since answered that call to arms, including many Canadians, despite warnings from the federal government against all travel to the country.

Foreign Affairs Minister Melanie Joly and Anand repeated those warnings Wednesday when asked what support the government will give Canadians captured by Russian forces.

Russia has reportedly threatened criminal prosecutions against any foreigners captured fighting in Ukraine.

Allen, meanwhile, raised the spectre of Moscow attempting to use captured foreign fighters for propaganda purposes.

“Global Affairs has identified for Canadians the risks that are associated with going into a conflict zone at any given point in time, not only for their own physical safety and protection, but as well for disinformation,” she said.

“Foreigners who may be engaged in the country can be used in ways that are difficult and counterproductive to the work that is going on there through the disinformation campaigns that we know that Russia is very apt to use.”

Some experts have also raised questions about the legality of Canadians fighting in another country’s war, as well as the potential security concerns given the presence of far-right paramilitary groups in Ukraine.

The war in Ukraine will be the focus of a special meeting of NATO leaders in Brussels on Thursday, which will include Prime Minister Justin Trudeau.

Anand told the committee that the government is continuing to look at ways to support Ukraine as it continues to hold out against Russian forces, including the potential of buying more weapons for its military.

“We are doing whatever we can to assist Ukrainian soldiers at this time, including exploring the possibility of procurements from third-party suppliers, as well as liaising with our international partners to contribute to efforts to support Ukrainian soldiers in a bilateral way,” she said.