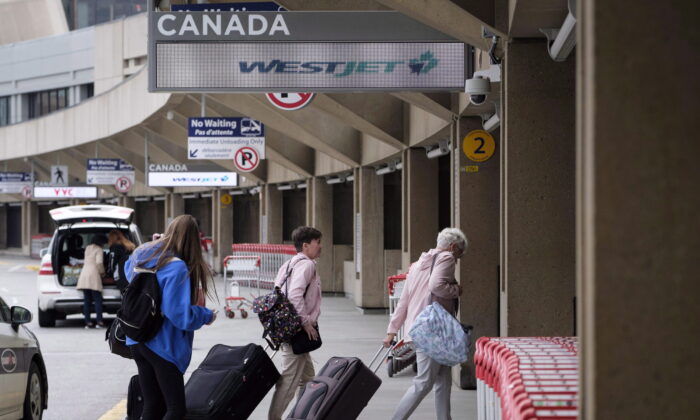 Travellers arrive at the Calgary Airport in Alberta on May 10, 2018. (Jeff McIntosh/The Canadian Press)
By Peter Wilson

The Canadian Transportation Agency (CTA) has a backlog of 30,000 passenger complaints concerning issues such as delayed or cancelled flights or damaged luggage, said the CTA’s dispute resolution general director while testifying before a parliamentary committee on Nov. 28.

“While we have been receiving an average of 1,500 complaints per month in April, May, and June of this year, complaint volumes jumped to more than 3,000 in July and 5,700 in August,” Michelle Greenshields told the House of Commons transport committee on Nov. 28, as first reported by Blacklock’s Reporter.

Greenshields said air travel volumes have “rebounded” since a number of COVID-19 travel restrictions were lifted earlier this year, causing the industry to struggle with “the speed of recovery.”

“We’ve witnessed a big jump in complaints, which has only recently started to slow down,” she said.

“Despite processing more complaints than before, in 2021-2022 we processed over 15,000 complaints, which is more than three times the number of complaints that we were processing annually before the APPR [Air Passenger Protection Regulations] and the pandemic.”

Greenshields said the CTA is “working on addressing the backlog” by increasing the agency’s complaint-processing resources.

MPs on the committee questioned Greenshields and her colleague, Tom Oommen, the CTA’s analysis and outreach director general, about the massive jump in complaints recently.

“You said that before it was about 5,000 or 6,000 complaints per year and now it’s around 15,000,” said Bloc Québécois MP Xavier Barsalou-Duval. “So if there’s 30,000 that haven’t been dealt with, that means that there’s about a two-year wait time to deal with all of those complaints.”

Barsalou-Duval also wanted to know if the CTA ensures that complaints are thoroughly resolved once they are addressed.

“Do you call on people afterwards to find out if they’re satisfied with the final result? Do you have any statistics on user satisfaction?” he asked.

Oommen said the CTA does measure customer satisfaction. He later added the agency estimates that only a tiny fraction of unsatisfied passengers actually submit complaints, despite the heavy backlog.

“The number that we found to be a reasonable approximation that we use for forecasting complaints into the future is roughly one in 5,000 passengers will issue a complaint,” he said.

“Does the CTA have a service standard?” asked Conservative MP Mark Strahl. “We heard that the airlines have 30 days to provide information and that it’s taking 18 months for the CTA to to review complaints. What is the service standard and when can we expect it to be met?”

“It can take up to 18 months to have a case processed at the CTA,” Greenshields said. “There’s a variety of factors that contribute towards how long a case takes to process.”

NDP MP Taylor Bachrach said that he’s filed complaints before that have taken about a month to be addressed by airlines.

“A lot of passengers we know don’t go through the process because, frankly, it’s pretty onerous,” he said.

“I’ve been through it and it’s a really frustrating process to go through.”