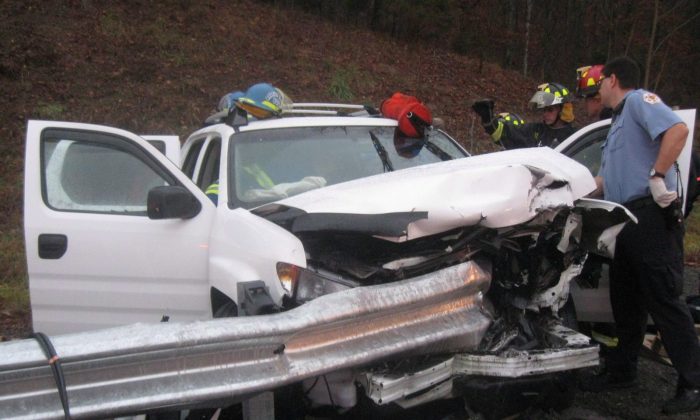 Firefighters and rescue personnel attend the scene of a car accident in Bristol, Tenn., on Dec. 17, 2008. Authorities across Canada are awaiting test results from the U.S. before deciding what to do about thousands of safety devices with alleged defects that could cause guardrails to rip through cars and motorists instead of protecting them in crashes. (The Canadian Press/Joshua Harmon)
Canada

TORONTO—Authorities across Canada are awaiting test results from the U.S. before deciding what to do about thousands of safety devices with alleged defects that they say could cause guardrails to rip through cars and motorists instead of protecting them in crashes.

In the interim, several provinces have stopped installing the units, which would cost tens of millions of dollars to remove, while the town of Stratford, Ont., has launched a proposed $500-million class action against the manufacturer.

At issue is Trinity’s ET Plus—the end unit of the guardrail—which is supposed to absorb impact and guide the rail so a crashing vehicle isn’t slamming into the rigid steel end.

The lawsuit, filed in Ontario Superior Court on behalf of all affected Canadian jurisdictions, alleges Trinity Industries secretly made unauthorized changes to the ET Plus about 10 years ago and failed to warn anyone about “serious failures” it knew about.

“Rather than absorbing the crash energy as originally intended, designed and tested, the guardrail becomes a rigid spear that impales the vehicle and its occupants, often severing limbs,” the suit states.

When you hit them, they don’t properly move the guardrail away from the car.
— Stratford lawyer Matt Baer

In an interview, Stratford lawyer Matt Baer said Trinity, which operates primarily out of Dallas, Tex., changed the design to save money on manufacturing.

“Now when you hit them, they don’t properly move the guardrail away from the car,” Baer said. “It’s quite dangerous.”

Trinity’s Toronto lawyer Mike Eizenga refused to comment, citing his company’s policy.
However, in a recent filing with the U.S. Securities and Exchange Commission, Trinity noted the Stratford lawsuit as one of several legal actions related to ET Plus—the others are all in the U.S.—but said the actions were “without merit.”

“We intend to vigorously defend our products and our long-standing reputation for ethical and honest business practices against allegations based on fiction rather than fact,” Theis Rice, senior vice-president of Trinity Industries, said in a statement last month.

Deaths, Injuries in the US

Joshua Harman, a federal whistleblower who won a fraud suit against Trinity in Texas in October that could see the company forced to pay US$700 million, said in an interview Wednesday that at least 200 deaths and injuries can be attributed to the ET Plus in the U.S.

In November, U.S. highway authorities ordered new crash testing of the ET Plus. Results are pending.

At least 42 states have stopped installing the units while Virginia is pondering a product recall, and at least three Canadian provinces have now removed Trinity products from their approved list.
Alberta, for example, stopped installing them in October but has no plans to replace the estimated 1,000 units in service, a chore that would cost as much as $20 million.

“We haven’t had any problems with it specifically—to date it has performed the way the testing said it would,” said Jamie Friesen, spokesman for Alberta Transportation.

“(But) once it came to light that there were problems with the testing and the actual product itself, we did remove it from our approved product inventory.”

Nova Scotia and Quebec, which has about 4,500 of the units installed, have also withdrawn approval of ET Plus.

Brian Taylor, with Nova Scotia Transportation, said the province was unaware of any issues with its installed systems but was watching U.S. developments closely.

A spokesman for Ontario’s Ministry of Transportation said any decisions would come after final test results from the U.S. are in.

While it’s unknown how many of the units are in use, Bob Nichols said Ontario was not aware of any safety performance issues in the province.

“We are cautiously optimistic,” Nichols said.