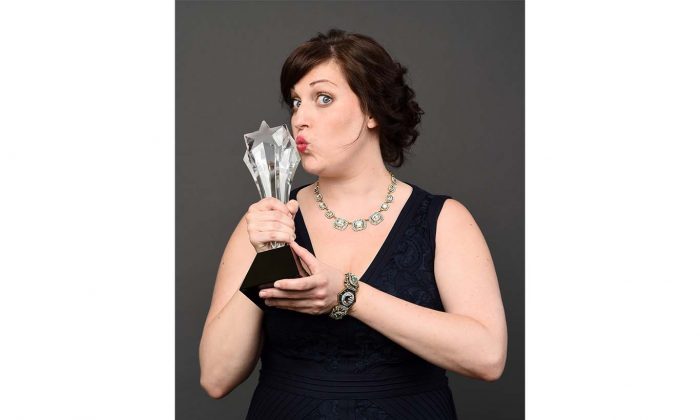 Allison Tolman, winner of the Best Supporting Actress in a Movie or Mini-Series award for "Fargo," poses for a photo during the 4th Annual Critics' Choice Television Awards. (Michael Buckner/Getty Images)
Canadian Content

But on July 10, he landed an Emmy nomination for his work on “Fargo”—a moody drama shot right in his hometown of Calgary. The series is up for a whopping 18 trophies, a tally eclipsed only by leading nominee “Game of Thrones,” which is vying for 19.

“I was really excited,” Lloyd said in a telephone interview shortly after he heard the news. “I think that everybody sort of felt like we had done something that was a little bit off the beaten path. … It’s not something you see every day.”

Based on Joel and Ethan Coen’s 1996 film, “Fargo” will compete for best miniseries at the Emmys, while actors Billy Bob Thornton, Martin Freeman, Colin Hanks and Allison Tolman are in the hunt for acting honours.

Lloyd, 30, made a name for himself working as a cinematographer on commercials and films, including “Savages” and “The Better Angels.” When his friend Adam Bernstein (“Fargo” executive producer) asked him to join the Calgary shoot, Lloyd knew the show was under pressure to live up to the Oscar-winning movie.

“I give a ton of credit to Adam Bernstein. … He really saw the potential to modernize it and take the charm of the movie and attempt to update it aesthetically,” said Lloyd. “I think that had it attempted to be more of a carbon copy, or more referential, it would have competed with the things that worked really well about the movie that don’t necessarily translate into a 10-episode miniseries.”

The dark tenor of “Fargo,” which airs on FXX Canada, is partially derived from its barren, snow-covered landscape. This “dynamic blandness” can actually be difficult to create while filming in sunny Calgary, said Lloyd.

“The approach was, ‘How do you create visual intrigue while adhering to this strict look that came out of the original movie that was predicated on this endless whiteness or endless expanse, that by nature doesn’t have a lot of drama?'” he said. “Staging a lot of scenes at night helped … and then figuring out how to take the sun away all day long, which is difficult.”

Chad Oakes, one of the show’s Canadian producers, said he was proud to see a number of other Albertans also score nominations on July 10, including Bridget Durnford for editing and Frank Laratta and Mike Playfair for sound.

Oakes won an Emmy in 2007 for Alberta-shot miniseries “Broken Trail.” He praised “Fargo” executive producer and writer Noah Hawley as well as MGM TV and FX for their vision.

“The expectations were incredibly high. There was a lot of pressure. I give credit to Noah for leading the way,” he said. “I keep coming down to the look of the show, the actors and the writing, all of that coming together. It’s kind of lightning in a bottle when it works, and I feel it did. We’re so proud that the Academy and its voters also felt the same.”

Also key to the show’s success were the actors, who spent a gruelling five months filming the series during one of the coldest winters in Calgary’s history, Oakes said.

“Allison Tolman is a newbie to this business and you’re going to see a lot more of her. She’s so humble and so talented,” he said of the actress who plays dogged police officer Molly Solverson.

“Billy Bob, he is such a solid, great guy, as a human being and as a person. He’s kind and gentle and so courteous to the crew. Martin Freeman, Colin Hanks, Bob Odenkirk. All of these guys were just wonderful guys, not just on set but also after hours too.”

Durnford, nominated for her editing role, said she took inspiration from all of the Coen brothers’ films—especially 2007 Oscar winner “No Country for Old Men.”

“I had seen it before, but I just sort of studied it,” she said. “I just took that sort of approach. Let things breathe. Let the actors tell the story … that’s the Coen brothers’ thing. Nothing’s rushed. If it takes this amount of time to make a point, then we’ll take that amount of time.”

Canadian casting director Jackie Lind, who also won an Emmy for “Broken Trail,” also landed a nomination. She was born in Saskatchewan and now lives in Vancouver, but said she loves working in Calgary.

“It’s authentic, the locations are absolutely extraordinary, and also you couldn’t have gotten any luckier with all that snow that happened for ‘Fargo.’ It was hard on the crew, but it’s a tremendously beautiful place to film,” she said. “The actors there are hungry. They’re not bitter and jaded. They love the opportunities. They step up to the challenge.”

“I’ve always championed that. We certainly by far have some of the best talent in the world. I think we’re not recognized enough for it,” she said. “I think one of the reasons is that as soon as our Canadian actors start to do well, they leave to go to Los Angeles, and they’re considered these big, Hollywood stars.”

The 66th Annual Emmy Awards will be hosted by Seth Meyers on Aug. 25.