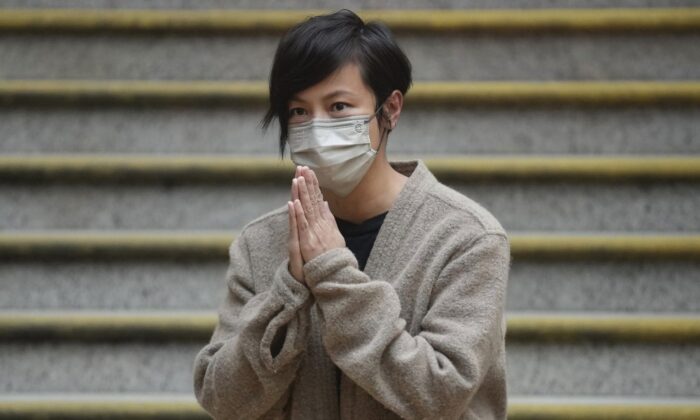 Canadian singer and activist Denise Ho is one of at least four people who have been arrested in Hong Kong on suspicion of colluding with foreign forces to endanger China’s national security, reports said Wednesday.

The rights group says the arrests are apparently related to their roles as trustees of the 612 Humanitarian Relief Fund, which provided legal aid to people who took part in 2019 pro-democracy protests that were quashed by security forces.

Scores of pro-democracy activists have been arrested under a sweeping National Security Law imposed on the city by Beijing in 2020. Ho was previously arrested and briefly detained in December.

“The news of multiple arrests in Hong Kong of former trustees of a legal defence fund, including Denise Ho, is deeply troubling,” she wrote on Twitter.

A spokeswoman for the group Alliance Canada Hong Kong says the arrests are a sign of worsening repression in Hong Kong. “It’s not exactly surprising that it happened, but it’s still shocking,” Ai-Men Lau said. “Especially arresting a 90-year-old cardinal for his peaceful activities,” she added in reference to Zen.

Lau said Ho was born in Hong Kong but grew up in Brossard, Que., on Montreal’s South Shore. Ho has previously cited her time in Canada as a source of inspiration for her activism, Lau said.

Since returning to Hong Kong, Ho has become a “significant figure” in the pro-democracy community, and she helped run the 612 Fund, said Lau, who urged the Canadian government to ensure Ho receives proper consular support.

Global Affairs Canada said in a statement Wednesday the department was providing consular services to Ho.

Ho’s manager, Jelly Cheng, confirmed Ho’s arrest on Wednesday but said she had no other information.

The arrests follow the selection on Sunday of Hong Kong’s new leader, John Lee, a hardline former security chief who ran unopposed in a process controlled by Beijing.

The European Union and foreign ministers from the Group of Seven industrialized countries — including Canada — condemned the election as fundamentally undemocratic and a betrayal of the “one country, two systems” principle under which Hong Kong was supposed to retain its own political, legal and economic system for 50 years after the end of British colonial rule.

Lau, however, urged the Canadian government to go even further in supporting democracy in Hong Kong.

While the statement was a good step, “we haven’t seen that followed up with concrete actions: for example, sanctions against Hong Kong officials responsible for the political crackdowns,” she said.

She said she also believes Canada should further expand humanitarian programs for those impacted or those seeking to flee Hong Kong due to political persecution.

Hong Kong’s government and police had no immediate comment on the reported arrests.

Zen, the retired archbishop of Hong Kong, is a fierce critic of China and has been blistering in his condemnation of the Vatican’s 2018 agreement with Beijing over bishop nominations, which he has said was a sellout of underground Christians in China.

The Vatican spokesman, Matteo Bruni, said the Holy See “learned with concern the news of the arrest of Cardinal Zen and is following the evolution of the situation with extreme attention.”

Hui was arrested at Hong Kong’s international airport as he sought to leave the city, Hong Kong Watch said.

“Today’s arrests signal beyond a doubt that Beijing intends to intensify its crackdown on basic rights and freedoms in Hong Kong,” said the group’s chief executive, Benedict Rogers.

“We urge the international community to shine a light on this brutal crackdown and call for the immediate release of these activists,” Rogers said.

Several leading Hong Kong activists have fled to Taiwan, Britain or elsewhere, while thousands of other Hong Kongers have chosen to leave the city, raising concerns about the economic future of the Asian financial centre of 7.4 million.