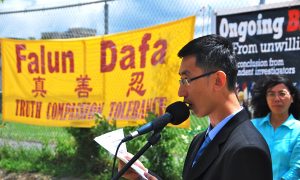 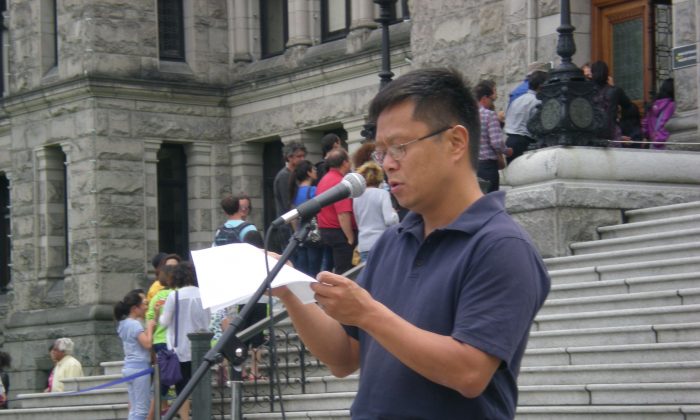 Yingyi Chen, a resident of Nanaimo, B.C., speaks at a rally outside the B.C. Legislature in Victoria on July 20, 2014, to mark the 15th anniversary of the launch of the persecution against Falun Gong in China on July 20, 1999. Chen’s mother and sister were repeatedly imprisoned and tortured for practicing Falun Gong. His mother was able to come to Canada in 2008, but his sister is currently in detention in China. (Epoch Times)
Canada

Here in Canada, it’s been nearly that many years that Canadian citizen and Nanaimo resident Chen Yingyi has known the real-life impact on his family and the firsthand suffering of his mother and sister, both practitioners of the traditional Chinese spiritual discipline.

For nearly that many years, he has tirelessly given voice to their plight.

He eventually rescued his mother, Huang Jinling, to Canada, away from the beatings and other abuse she had experienced in labour camp.

Now he is seeking help to free his sister, knowing the brutal torture she suffered the previous times in detention, the first being in 2003.

“My mother was arrested four times, and spent one year in labour camp. My sister Yinghua was put in jail three times and has been forced to leave her home and live in hiding many years in between,” said Chen at a rally outside the B.C. Legislature in Victoria on July 20.

The rally was held to mark the 15th anniversary of the persecution of Falun Gong in China, launched July 20, 1999.

On March 12 this year, Yinghua was arrested a third time. This occurred while she was accompanying her niece who was attempting to visit her father at a detention centre in Shijiazhuang City, Hebei Province, about 300 km from Beijing. The father was himself in custody for practicing Falun Gong.

Since then, Yinghua has been on a hunger strike to protest her incarceration.

“We understand that is her only option to uphold her belief,” Chen said.

His MP, Nanaimo-Alberni MP James Lunney, as well as Calgary Centre MP Joan Crockatt, who represents Chen’s parents, have both called on the Chinese regime to immediately release Yinghua.

“Ms. Chen is a Falun Gong practitioner and poses no threat to the Chinese government,” the two MPs said in a news release in April, on day 31 of Yinghua’s hunger strike, expressing deep concern over her safety.

Chen recalled that in 2003, the first time Yinghua was arrested, Lunney had held a news conference denouncing the persecution, and under the pressure Yinghua was released quickly.

In his speech at the rally, Chen said he immigrated to Canada from China 16 years ago, followed by his family and parents, and he told a personal story to explain why “all my family members including grandparents, seven of us, are very proud that we are Canadians.”

It was a story about “how valuable freedom is.”

In January 2008, he and his wife and two children visited his mother in jail in China. When he asked his mother how she was, she said: “I am fine. The guards and fellow prisoners are nice to me. They try to help me.”

However, the meeting was surrounded and monitored by guards. His mother tried to write words with her index finger on his palm while he held her hands, but “I knew she could not tell the truth,” he said.

“More than ever before, I felt the sadness that a person, without freedom, cannot say what she really wants to say, even when you are face to face, eye to eye with her.”

Chen’s mother was finally able to come to Canada later that year. Now that she could speak freely, he asked what she had really wanted to say that day. She said she had wanted to tell him that the prison guards had encouraged the other prisoners, who were drug addicts, to beat her.

“The prison authorities try everything to mentally and physically destroy Falun Gong practitioners. On one occasion, [my mother] witnessed one practitioner who, under the threat of beating, was pressured to eat feces on the prison cell floor,” Chen said.

“The distortion of human integrity and dignity is beyond the imagination of people in the free world.”

Organ Harvesting From Prisoners of Conscience

Falun Gong, also called Falun Dafa, consists of meditation exercise and moral teachings based on the principles of truthfulness, compassion, and forbearance.

According to official figures, it was practiced by over 70 million people in China by the late 1990s.

The persecution that began in 1999 has seen hundreds of thousands sent to labour camps, prisons, “black jails,” and other places of detention where torture and other abuses are widely used to force Falun Gong practitioners to give up their faith.

Following an investigation in 2006, Winnipeg-based international human rights lawyer David Matas and former Canadian Secretary of State for Asia-Pacific David Kilgour concluded that the Chinese regime has put to death tens of thousands of Falun Gong prisoners of conscience while harvesting their organs to supply a gruesome trade in human organs.

Other independent investigations corroborating this conclusion include one by Kirk Allison of the University of Minnesota and another by European Parliament Vice President Edward McMillan-Scott.

Clive Ansley, North American chair of the Coalition to Investigate the Persecution of Falun Gong, spoke at the rally and had strong words of criticism for both the media and politicians for not doing more to expose and speak out against the illegal organ harvesting in China.

“The media systematically ignores the most bestial atrocity that the world has seen since the Holocaust,” Ansley said.

“Over the last 15 years the most barbaric crime against humanity in modern history has been unfolding daily in China and it has provoked an absolutely thunderous silence on the part of our media and most of our North American politicians.”

Guo Guoting, another speaker at the rally, practiced law for over 20 years in Shanghai and had his licence revoked by Chinese authorities in 2005 for his defence of journalists, fellow civil rights lawyers, and others, particularly Falun Gong practitioners.

Placed under house arrest and criminal investigation, the prominent lawyer was finally released and arrived in Canada in May 2005, due to international appeal efforts.

Guo said in his speech that the Chinese Communist Party controls the media in China and uses it to demonize Falun Gong.

Judy Tethong, president of the Victoria chapter of the Canada Tibet Committee, also spoke, noting that the Chinese regime’s destructive policies have been devastating not only for Tibetans but also for other persecuted groups including Falun Gong practitioners.

Chen expressed faith in the future and said he believed it is everyone’s obligation to help stop the human rights atrocities taking place in China.

“I am confident that justice will be served for Falun Gong practitioners,” said Chen. “For the matter of religious freedom and human rights, the Communist Party of China knows it’s on the losing side of the struggle, and they know they are guilty of the crime they have committed.”

“I think it’s our obligation, as human beings, to denounce the suppression of religious freedom and the human rights abuses committed by the Communist Party of China,” he added.

“People there are still suffering. They need our help.”