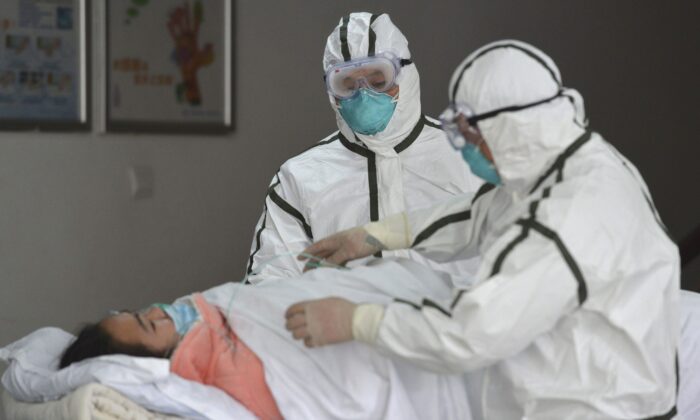 Medical workers in protective suits move a coronavirus patient into an isolation ward at the Second People's Hospital in Fuyang in central China's Anhui Province on Feb. 1, 2020. (Chinatopix via AP)
Canada

OTTAWA—Canada will aim $6.5 million at research on stopping the spread of the novel coronavirus, after co-ordinating with researchers around the world on tackling the outbreak.

Representatives of the Canadian Institutes of Health Research (CIHR) are returning from two days of talks with the international research community at a World Health Organization forum in Geneva, Switzerland.

There, more than 300 scientists and researchers mapped out a plan to answer the questions that linger about the virus and agreed on a set of research priorities.

Chinese researchers participated remotely, and their message was that research should be focused on keeping people alive.

“That’s a good lens, because this is a rapid emergency response,” said Charu Kaushic, scientific director of CIHR’s Institute of Infection and Immunity, from her hotel room in Geneva. Kaushic is also a professor at McMaster University in Hamilton.

That could mean developing medical therapies or a vaccine in the long term. China, where the virus was first detected and where most of its victims live, is already testing dozens of potential drug treatments.

In the meantime though, researchers will be tailoring their studies to focus on infection prevention, quarantine protocols, personal protection measures, and other ways to keep the virus at bay. The WHO aims to study not only possible vaccines and therapies, but also the effectiveness of the public-health response and the social impact the disease has inflicted on the world.

At least 25 countries have confirmed cases of the virus. There have been two deaths outside China: one in Hong Kong and one in the Philippines.

CIHR and several other Canadian research bodies have pulled together $6.5 million to hand out as research grants for science on the outbreak, and expect more money to be forthcoming as they continue negotiations with the federal government.

The group put out a call for research proposals Monday, and Kaushic said she will spend the next 24 hours refining applications so they align with the World Health Organization’s priorities.

The institute has suggested researchers look at everything from medical interventions to the spread of fear and discrimination caused by the virus.

The applications for the Canadian funding will be evaluated as quickly as possible, with the hope that researchers will be able to get to work before the end of the month.

An unusual requirement will be placed on the winning grant recipients: they’ll be expected to attend meetings with other global researchers to continue the co-ordinated approach to fighting the virus.

“This outbreak is a test of solidarity—political, financial, and scientific,” said WHO director general Tedros Adhanom Ghebreyesus in a statement Wednesday.

“We need to come together to fight a common enemy that does not respect borders, ensure that we have the resources necessary to bring this outbreak to an end and bring our best science to the forefront to find shared answers to shared problems.”

The international community will come together again in several months to see if there are any research gaps.

While the vast majority of confirmed Covid-19 cases are in China, the research community agreed the world must be prepared for the outbreak to overflow the country’s borders.

“We don’t know how this is going to play out, which is why we can’t stop at this point,” Kaushic said. “We have to continue with the worst-case scenario.”