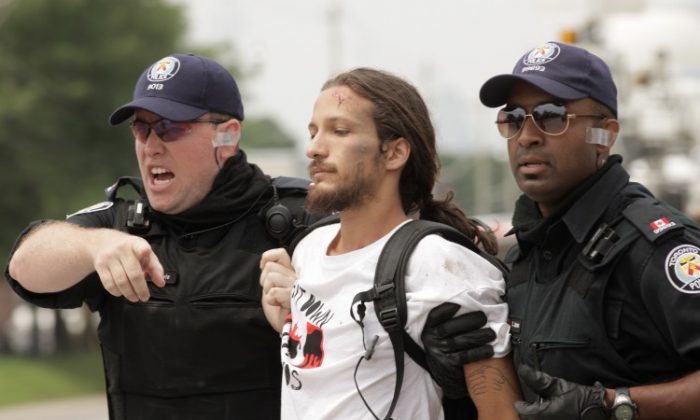 Police arrest a protester outside the temporary G-20 police detention center, where over hundreds of people were detained on June 27, 2010 in Toronto, Canada. (Simon Hayter/Getty Images)
US

Canadian Police were criticized for being ill prepared for the G-20 summit events in June 2010 and the protests that followed by a civilian police watchdog that reviewed the conduct of police during the summit.

“What occurred over the course of the weekend resulted in the largest mass arrests in Canadian history,” Gerry McNeilly, head of Ontario’s Office of Independent Police Review Director said in his report.

Some 1,100 people were detained over the G-20 weekend, most never facing charges, as police reacted to widespread violence and vandalism.

“These disturbances had a profound impact not only on the citizens of Toronto and Canada generally but on public confidence in the police as well.”

Reviews into police conduct were launched based on numerous complaints from groups such as the Canadian Civil Liberties Association and Amnesty International.

Amnesty International at the time asserted that summit security measures appeared to result in “extensive violations of essential rights associated with peaceful protest and due process, including rights to freedom of expression and assembly and the right to be protected from arbitrary arrest.”

Security for the events in Toronto was provided by an Integrated Security Unit consisting of the RCMP, the Toronto Police Service, and the Canadian Forces, among others.

The G-20 summit was held in Toronto in June 2010, following the G-8 summit in Huntsville, Ontario. The combined security for both summits comprised Canada’s largest ever, domestic security operation involving roughly 21,000 personnel.

McNeilly said that the Toronto Police Service had “incomplete and inadequate” planning for the G-20 security operation, and that it lacked experience in planning and executing operations of this scale.

He also noted that police used “excessive force” when making arrests in many instances, and that the Prisoner Processing Center was “poorly planned, designed, and operated.” The lack of proper processes resulted in prisoners being lost within the system and prisoners not having their basic needs addressed due to inadequate staffing.

McNeilly notes, however, that given the short time they had for planning, “policing was generally carried out very well,” but improvements are needed.

Security only had six months to prepare for the G-20, compared to most host cities that have two years.

In a separate report released this week, the watchdog for Canada’s federal Royal Canadian Mounted Police (RCMP), concluded that the actions of the force during the G8 and G20 summits were “reasonable and appropriate.”

“The RCMP ably fulfilled its planning and operational responsibilities relating to security for this large-scale international event,” Ian McPhail, the interim chair of the Commission for Public Complaints Against the RCMP, said in a statement.

The RCMP had the primary responsibility for the security of the summit and the protection of visiting foreign dignitaries.

McPhail said the RCMP had behaved properly in conducting its duties.

“Planning for both events was found to be thorough. The investigation did not reveal any instances of unreasonable use of force by RCMP members,” the commission said.

McPhail also cleared the RCMP of any wrongdoing in the so-called “kettling” incident, noting that although such tactics are not consistent with the RCMP’s policies and practices, the site was at the time under the control of the Toronto Police and the Ontario Provincial Police.

The kettling incident involved police boxing in of hundreds of people for hours in the rain in downtown Toronto on June 27, 2010.

“It is hoped that the issues identified throughout the planning process, during the summits, and in the context of the commission’s public interest investigation, will serve to enhance security for such events in the future,” McPhail said.