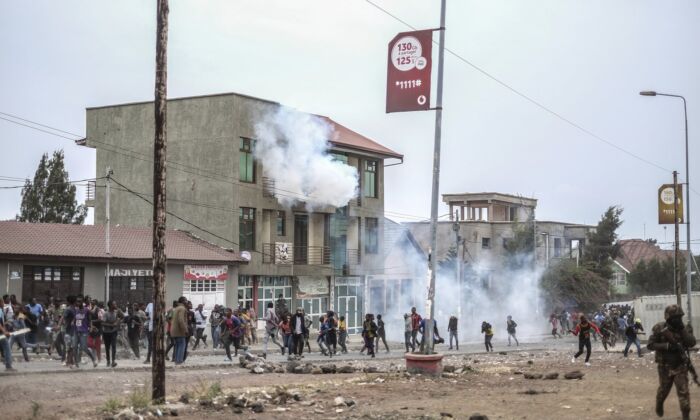 Residents protest against the United Nations peacekeeping force (MONUSCO) deployed in the Democratic Republic of the Congo in Goma July 26, 2022. (The Canadian Press/AP/Moses Sawasawa)
Canada

The federal government says all Canadian peacekeepers are safe and accounted for following a second day of deadly anti-United Nations protests in the Democratic Republic of Congo.

The Department of National Defence and RCMP confirmed the safety of all Canadian personnel in the DRC on Tuesday as the UN reported three peacekeepers had been killed in the violence.

Dozens of other people have also been killed or injured during what UN officials described as several attacks on peacekeeping bases and facilities in the country.

Demonstrators have accused the peacekeeping mission of failing to protect civilians amid rising violence in Congo’s eastern region, calling for UN forces to leave.

There have been allegations that peacekeepers fired upon civilians, prompting UN officials to promise an investigation even as they scramble to protect their facilities and people.

The UN says Canada had nine police officers and eight military officers in Congo at the end of March.

The Defence Department said six Armed Forces members are there at the moment.

“All CAF personnel are safe and accounted for, and there have been no reported injuries,” department spokeswoman Jessica Lamirande said in an email.

“CAF personnel were not involved in the violence and are currently sheltering in place at their homes.”

The RCMP, through Global Affairs Canada, reported: “All Canadian Police … are accounted for and safe.” It did not add any details.

UN deputy spokesman Farhan Haq said Tuesday that hundreds of assailants again attacked bases of the UN force, known by its French acronym MONUSCO, in Goma as well as other parts of North Kivu “fuelled by hostile remarks and threats made by individuals and groups against the UN, particularly on social media.'”

“Mobs are throwing stones and petrol bombs, breaking into bases, looting and vandalizing, and setting facilities on fire,” Haq said. “We are trying to calm things down,” including by dispatching quick reaction forces, but there was no evidence the violence had ended.

In addition, Haq said at least four incidents targeted the residences of MONUSCO staff, who have now been relocated to UN camps. A mob also tried to enter the compound of the UN Development Program earlier Tuesday, he said.