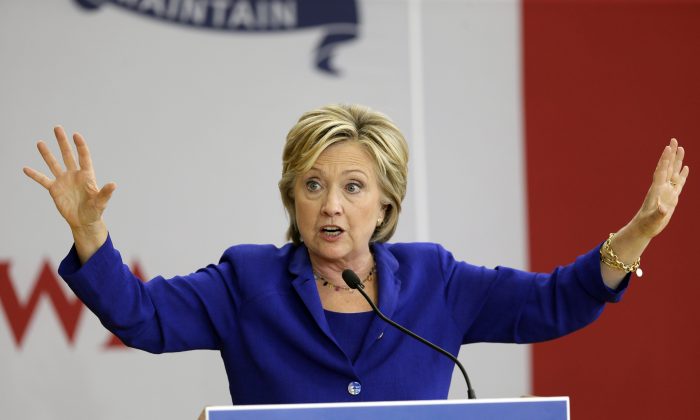 Democratic presidential candidate Hillary Clinton speaks at a campaign stop in Des Moines, Iowa, on Sept. 22, 2015, where she told voters she opposes the Keystone XL project. The next day she released a policy paper calling for a Canada-U.S.-Mexico climate-change plan. (AP Photo/Charlie Neibergall)
Canada

WASHINGTON—A campaign promise by Hillary Clinton rippled across the border into Canada’s election on Wednesday, Sept, 23, with parties responding to her call for a broad, North American climate-change plan.

Clinton released a policy paper that proposed climate negotiations among Canada, the U.S., and Mexico one day after she announced her opposition to the Keystone XL pipeline.

The position paper from the presidential contender added a new wrinkle to a pipeline issue that has already inserted itself in two national elections—the current Canadian one and the 2016 U.S. presidential race.

Clinton wants to follow her opposition to Keystone with a broader program that includes immediately launching talks toward a North American Climate Compact.

Building a clean, secure, and affordable North American energy future is bigger than Keystone XL or any other single project.
— US presidential candidate Hillary Clinton

It would be a more aggressive plan than an existing one among the three countries, a continental working group created this year that proposes infrastructure upgrades but does not including a mechanism for enforcing emissions reductions.

“Building a clean, secure, and affordable North American energy future is bigger than Keystone XL or any other single project. That’s what I will focus on as president,” said the Clinton paper.

“As president, I will immediately launch negotiations with Canada and Mexico to forge a North American Climate Compact that sets strong national targets to cut carbon pollution, so all three countries demonstrate a commitment to climate action; (and) provides accountability measures, so each country has confidence that the others are living up to their end of the bargain.”

Canada’s main political parties all reacted from the campaign trail.

The opposition parties enthusiastically supported Clinton’s call, while the governing Conservatives took a different tack, noting that there’s already a precedent for what Clinton is proposing and refusing to comment further on a U.S. campaign promise:

But one environmental group said what Clinton proposes is different. Keith Stewart of Greenpeace Canada said this could be the first time countries are held accountable for breaking their commitments on emissions.

“Right now we have a bunch of things down on paper but there’s no penalty for not actually meeting the targets we’ve set. Talk is cheap,” Stewart said.

He predicted that Clinton’s election promise might shake up Canada’s debate: “I think this is going to put climate back into the Canadian election in a new way—as a foreign-policy issue,” Stewart said.

“We now have proposals coming from the U.S., from someone who stands a good chance of being the next president, saying, ‘We want to work with Canada. And we expect Canada to pull up its socks.'”

Clinton’s paper came one day after she stunned allies of the Keystone project by announcing opposition to a pipeline she’d once said she was inclined to support. She called Canadian oil the continent’s dirtiest fuel.

In Canada, the Conservatives and the Liberals support the Alberta-Texas pipeline, although the latter blame the Harper government’s inaction on climate for making Canadian oil a target in the U.S. The NDP opposes Keystone on the grounds that it would ship refining jobs to the U.S.