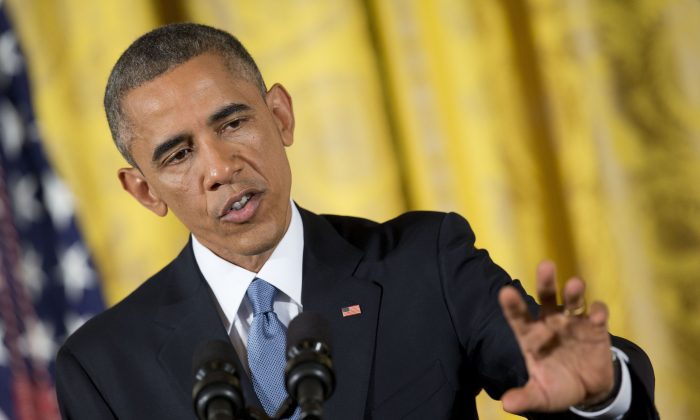 President Barack Obama answers questions during a news conference at the White House on Wednesday, Nov. 5, 2014. The Keystone XL pipeline project is poised to become one of the first orders of business in the new U.S. Congress. (AP Photo/Pablo Martinez Monsivais)
Canada

Parties 'can surely find ways to work together,' Obama says
By The Canadian Press

WASHINGTON—Canada’s stalled Keystone XL pipeline project is poised to become one of the first orders of business in the new U.S. Congress, where Tuesday’s Republican romp could end up impacting several cross-border industries.

There are hopes in Ottawa that the midterm results could spur movement on the controversial Canada-U.S. bitumen pipeline, as well as major free-trade negotiations and perhaps even meat-labelling rules that have hurt Canada.

Virtually every Republican asked about post-election plans has already mentioned Keystone XL as a top priority for the next Congress, a development that would be as detested by the environmental movement as it would be celebrated by oil industry supporters.

One of the biggest pipeline-boosters is Mitch McConnell—the next Senate majority leader and, arguably, now the most powerful member of the U.S. Congress.

“We need to embrace the energy revolution going on in our country and promote it. It’s hugely advantageous to America, not only in the realm of energy independence, but employment,” the Kentucky Republican said, referring to the long-delayed project.

“The employment figures connected with Keystone are stunning if we would just get going.”

Republicans have enough votes to force the issue to Obama’s desk, and could do so through an endless assortment of procedural tactics—some easier for President Barack Obama to veto than others, should he choose to. If the pipeline is about to become a bargaining chit, however, Obama wasn’t giving anything away Wednesday.

In fact, the president played down the project during a wide-ranging news conference at the White House.

The pipeline is undergoing a regulatory review, and is still the subject of a court fight in Nebraska over the route, he repeated. He listed conditions that are guiding his thinking about the project: Will it create jobs? Will it be good for Americans, and their pocketbooks? Will it really bring down gas prices? And will it affect greenhouse-gas emissions?

Obama has expressed skepticism in the past about the job-creation potential, and on Wednesday he appeared to question the project’s overall significance to Americans.

“Keep in mind, this is Canadian oil; this isn’t U.S. oil,” Obama said.

“While that (Keystone) debate has been raging, we’ve seen some of the biggest increases in American oil production and American natural gas production in our history. We are closer to energy independence than we’ve ever been before or at least as we’ve been in decades.”

Keystone may be the most politically explosive issue involving Canada, but probably isn’t the most important.

Tuesday’s Republican sweep could also have an impact on free-trade negotiations toward a new 12-country Trans-Pacific Partnership deal, said Gary Doer, Canada’s ambassador to the U.S. A Republican-controlled Senate is likelier to give Obama fast-track authority to negotiate than did his own Democrats, who were divided on the issue.

Doer said he is also hopeful that the next Congress might reconsider country-of-origin meat labelling, which has raised the prospect of a tariff war pitting Canada and Mexico against the U.S.

With a Democrat holding veto power in the White House, and Democrats holding enough seats in Congress to filibuster most types of bills, the parties will need to co-operate, Doer said in an interview.

“The biggest issue here is not just the seat count and control of the Senate, but the will of the American public to get on with it. And I think that would be useful for all Canadian issues,” he said.

Gridlock has been the norm lately.

A historically unproductive Congress has struggled to produce even routine legislation, to maintain highways and make payments on the national debt. The Republican-controlled House and Democratic-controlled Senate blocked each other at every turn.

The Republican party now has real power, for the first time in years. It must now decide how to use it: try governing with President Barack Obama, or seek to destroy what’s left of his presidency.

The Republicans can now hope to get bills through Congress, and to the president’s desk. They could also use their power in other, more aggressive ways.

The Senate majority party can block nominees to the courts, to cabinet, and to ambassadorships. It can compel witnesses to testify at hearings. It can pack poison pills into legislation and try force-feeding them to the president—a major budget bill, perhaps, laced with a little toxin that might weaken Obama’s signature health reform.

The grassroots will press its leaders to fight. In their public appearances Wednesday, the Democrat in the White House and the Republicans in Congress agreed to work together—when possible.

“I’m pretty sure I’ll take some actions that some in Congress will not like. That’s natural. That’s how our democracy works,” Obama said.

“But we can surely find ways to work together on issues where there’s broad agreement among the American people.”