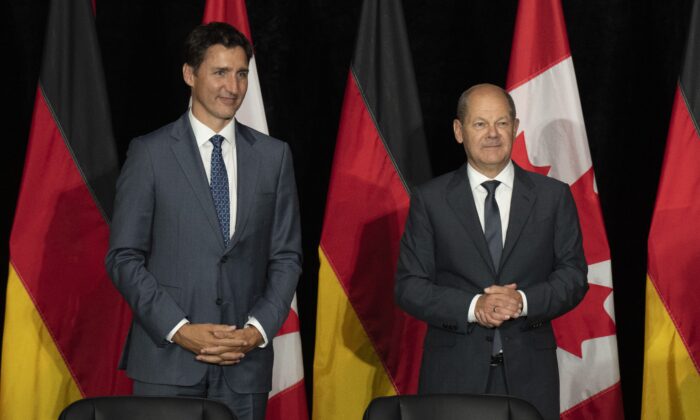 Canadian Natural Gas Can Be Exported to Germany If Governments ‘Remove the Politics’: Energy Firm

The CEO of a Quebec-based energy firm says it is feasible for Canada to export natural gas to Europe so long as governments from both provincial and federal levels “remove the politics.”

“We need to stop the politics, and we need to go to reality and change what’s going on and bring back common sense,” said Mario Levesque, who is also the president of Utica Resources Inc., in an Aug. 30 interview.

Levesque, whose company has been involved in the exploration and extraction of Quebec’s oil and gas resources, says the province has about 60 trillion cubic feet of natural gas—enough to replace all Russian imports into Germany for 30 years, provided “there is no politics and just geology.”

In a joint news conference with German Chancellor Olaf Scholz on Aug. 22, Prime Minister Justin Trudeau told reporters he is open to easing regulatory requirements for the export of Canadian natural gas to Europe, but questioned whether a business case exists for such investments.

In response to Trudeau’s comment, Utica Resources issued a press release on Aug. 25, arguing that “the business case for Quebec gas is crystal clear.”

“The gas reserves in Quebec are located near deep water port installations, requiring little in the way of infrastructure investment,” Levesque said in the statement.

“Additionally, these ports are much closer to Europe than the other potential major sources of gas for Germany such as Qatar or the U.S.”

In his interview with The Epoch Times, Levesque said given the relatively short distance from Quebec to Germany, the shipment of gas in the form of compressed natural gas can be done within two years.

“We do have a solution to solve their problem in 18 months if there is a political will,” he said.

He added there is no need for government subsidies for this opportunity, and estimated governments in Canada would make $40 billion in royalties and taxes.

On Aug. 29, Canada and Germany signed a hydrogen deal that will kick start a transatlantic hydrogen supply chain, with both countries believing that it will be up and running “well before 2030” and the first deliveries expected in 2025.

During the joint news conference on Aug. 22, Scholz painted a picture of Germans taking extreme measures to shore up their energy supplies in the short term to survive the coming winter as the country struggles with a decline in Russian energy exports.

At the same time, Scholz and Trudeau continued to underscore the need to transition from fossil fuels to clean energy over the medium-to-long term.

Levesque says it’s time to “get back to reality” as a transition period is still needed before the technology is ready.

“[The Germans] signed a contract for hydrogen but they don’t need energy in 5 to 10 years from now—they need it right away,” he said.

Levesque said governments need to acknowledge that global dynamics have shifted since the Russian invasion of Ukraine started, and should revisit regulations such as Bill C-69 that he says impede the energy sector.

Bill C-69 is a law enacted in 2019 which enhances environmental assessments for major projects such as pipelines.

Levesque said it’s important for Canada to ensure adequate energy security in the face of hostile emerging powers such as China.

In June, Utica Resources launched a lawsuit against the Quebec government over Bill 21 which bans hydrocarbon exploration and production in the province. The company is suing the Legault government for $18 billion, saying the province’s measure is violating Article 6 of the Quebec Charter of Rights and Freedoms.

The Epoch Times reached out to Quebec’s Ministry of Energy and Natural Resources for comment but did not hear back by publication time.

In a press conference on Aug 31, Trudeau said any new energy project has to “go through all the regulatory procedures in Quebec and at the federal level, if necessary.”