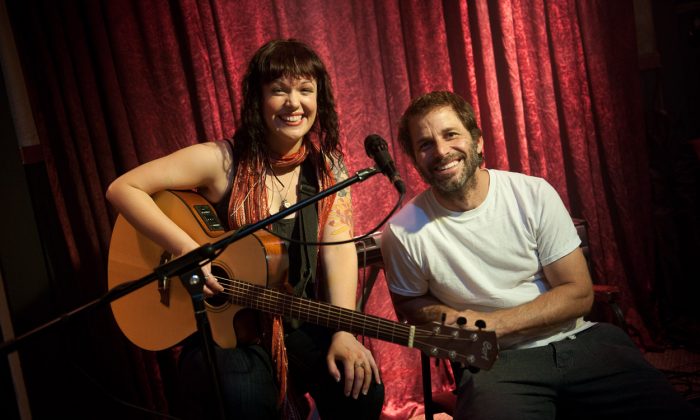 B.C. musician Allison Crowe with Hollywood director Zack Snyder on the set of "Man of Steel" in Cassidy, B.C. Canadian music is becoming more popular and lucrative around the world, according to the Society of Composers, Authors and Music Publishers of Canada. (Courtesy Clay Enos/Warner Bros)
Canada

Canadian music is proving to be an increasingly hot export commodity, according to a national music royalty organization that represents songwriters, composers and music publishers in Canada and overseas.

New figures from SOCAN (the Society of Composers, Authors and Music Publishers of Canada) indicate that the international earnings of its 115,000-plus members increased from $39 million in 2007 to $47 million in 2012.

Earnings have increased 21 percent in the past year alone, and the number of SOCAN members who received royalties from outside of Canada has doubled since 2007.

“We looked back and we found that there’s been a steady increase in the popularity [of Canadian music],” says SOCAN CEO Eric Baptiste.

“It’s a reflection of how our Canadian creators—the people who write the songs and compose the music—are more and more an element of our Canadian brand around the world.”

When original music is played on television, radio, online, or performed live, royalties are generated for the artists who composed the work. This revenue is tracked and collected by SOCAN, which then distributes it to member-artists as fair compensation for their music.

Baptiste says the Canadian music scene is becoming increasingly vibrant and dynamic, influenced by the many cultures and music styles that co-exist in Canada.

Programs such as FACTOR, a non-profit that provides recording and marketing funds, or the CRTC’s CanCon rules for mandatory Canadian content, have also contributed to the spread and increasing success of Canadian music worldwide, he adds.

“At the end of the day what matters is the quality of music that our songwriters and composers create, and the ability of our Canadian music industry to promote those events,” says Baptiste.

“We like to say at SOCAN that music written by our members, the Canadians, is as sweet an export as maple syrup.”

Another factor, he notes, is the influential Canadian artists who have achieved international fame in recent years—Justin Bieber, Carly Rae Jepsen, Arcade Fire, Drake—who have added street cred and mainstream appeal to the Canadian brand.

This has given Canada a new association with “urban music,” breaking away from traditional folk and rock territory with the likes of Leonard Cohen, Joni Mitchell, Neil Young, and Brian Adams, or female superstar acts such as Celine Dion, Sarah McLachlan, and Shania Twain.

The Long Road to Success

Singer-songwriter Allison Crowe is well aware of what it takes for a Canuck to achieve commercial success internationally.

Having started out performing in bars and coffee shops in her hometown of Nanaimo, B.C., at the tender age of 16, Crowe has gone on to garner critical acclaim in her nearly two-decade career.

Equally comfortable performing classical, jazz, pop, or rock, often with only the aid of her piano or guitar, versatility has factored into her success.

“I always like trying something new. I always like learning. I believe that you should never feel as though you’ve learned everything you have to learn—I always think I can get better,” she told The Epoch Times.

Crowe worked her way up the Canadian music scene, performing her first cross-country tour at age 20. Her first full-length album was released in 2004 when she was 22.

“It’s basically been a steady process of just touring and playing, writing and recording,” she said.

Crowe chose the relatively difficult path of working as an independent artist. Fearing she would be stifled creatively by a mainstream record label, she launched Rubenesque Records Ltd. in 2001 and has released albums under that label ever since.

“[Independence] is harder and it’s slower, but I find it more rewarding because you get this grassroots sort of steady build,” she says. “You get to really know the people that you’re playing for and forge relationships with them.”

In October 2006, following the release of her sixth album, “This Little Bird,” Crowe started touring internationally, visiting England, Ireland, and Scotland. She also toured regularly across North America and Europe, where she performed to great acclaim.

Crowe credits the Internet and YouTube promotion with much of her success, both in Canada and abroad.

“With the Internet it’s this immediate communication—people can hear you instantly, and respond instantly, and it’s just much faster that way,” she says.

In fact, it was through YouTube that Hollywood director Zack Snyder discovered Crowe and gave her a cameo role in his summer blockbuster hit, the Superman-remake “Man of Steel.” Crowe says the experience was a highlight of her career.

“It’s something I’ve always wanted to do,” she says, adding that walking the red carpet among celebrities when the movie premiered in New York in June was a big thrill.

“It was amazing, so much fun. It was such an exciting event that I had the fear that I was going to fall over or get nervous and throw up or something, but none of those things happened.”

Crowe’s manager, Adrian du Plessis, says the singer is an example of how today’s artists can bypass traditional music industry “middle-men” such as record labels, radio stations, and expensive marketing campaigns, and achieve success on their own terms through direct communication with their fans.

“Allison’s built her success primarily via her music recordings being available on the Internet, in conjunction with touring,” he says. “It’s perhaps a sign of this new world in music/media.”