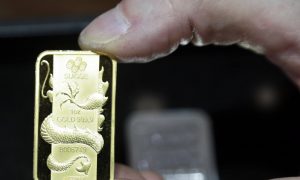 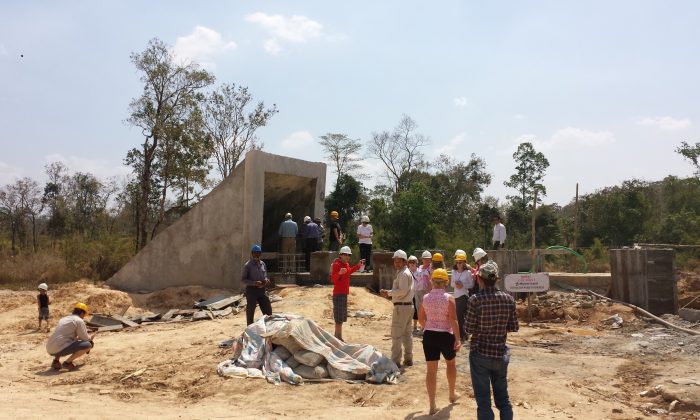 Investors inspect the construction site of Cambodia's first commercial gold mine in Ratanakiri Province, Eastern Cambodia, on Feb. 6, 2015. Mesco Group of India is planning to complete the construction project and start mining until the end of 2015. (Valentin Schmid/EpochTimes)
Asia & Pacific

BANLUNG CITY, Cambodia—They come and just rob the local people of their resources. Whether it’s North Dakota or Cambodia, that’s how most oil and mining companies are perceived to do business. Angkor Gold Corp. is different.

For the Canadian mining and exploration company operating in eastern Cambodia, corporate social responsibility (CSR) comes before the first hole is drilled in the ground—and not just in the corporate presentation.

“It’s the right thing to do. To do nothing when we have some ability to help residents in a country where we are the foreigners, would be completely unacceptable. That’s the philosophy of our entire team,” said Delayne Weeks, VP of corporate social responsibility.

We try to treat people the same way that we would like to be treated.
— Delayne Weeks, Angkor Gold

Other mining and oil companies only start a social program once they are sure they have an economically viable project, she said. Angkor started with its social programs from day one. They include schools for hundreds of students, a health center servicing 20,000 people, a farm, and countless smaller projects.

“We try to treat people the same way that we would like to be treated,” said Delayne Weeks. The company also makes a point of hiring local staff, who are very happy with the way Angkor, named after the famed archeological site near Siem Reap, conducts business in a country in dire need of help and vulnerable to exploitation.

“I am very happy to work here because Angkor Gold is not just about the business; they also work with the people in the village. It’s the first company in Cambodia that thinks like this. The other companies only think about business,” said Ma Samath, who does geological field work for Angkor and also deals with the local people.

He said especially rubber plantation companies, many of which are from Vietnam and obtain land through corrupt means, couldn’t care less about Cambodia. “They go to the village, they start cutting the trees,” he said.

It’s the first company in Cambodia that thinks like this.
— Ma Samath, Angkor Gold

According to Samath, Angkor creates a dialogue with people early on, explaining to them what the company intends to do, basically asking permission from the villagers, and providing help from day one. “We are not cutting the trees, we are just doing the exploration, it is a long way to do the mining,” he said.

As of this moment, Angkor has seven exploration licenses for over 1,448 square kilometers (559.08 square miles). It does not own the land and gold exploration is not a very intrusive procedure. When the mining actually starts, he said, they will have another conversation.

In terms of help, the local villagers told Angkor they need clean water and education the most. So the company built countless wells and clean water systems and provides education in basic hygiene, English, as well computer skills.

“The local people have no education in these things. We teach them to use freshwater and not just use any kind of water. We have the nurse and the midwife come to the school to teach the kids how to wash their hands and brush their teeth.” said Samath.

Whenever Angkor undertakes a social project, like its demo farms in Banlung City, it employs local people from day one. They get a “hand up, not a handout,” which is how the company calls its philosophy.

“Angkor Gold is different. It helps the community to reduce the poverty. It’s an international company, which contributes a lot to social responsibilities,” said Rida Orn, a teacher at one of Angkor’s schools. She thinks the poverty in the eastern city of Banlung, where Angkor operates, would be much higher without the company.

Angkor Gold is different. It helps the community to reduce the poverty.
— Rida Orn, teacher

Although the impact is huge, the costs to the company are trivial. The cost to build the school was just over $2,200 using some carpentry staff from the company. Equipment for the language and computer lab was $7,500, and annual costs like wages are below $10,000. Yet the school is making a difference in the lives of hundreds of children who can work in the tourism sector using these skills.

The locals go first, but in order to run a successful business, political leaders also have to be involved.

“It’s right from the tribal chief and the village leaders in the areas we work in and the local people right up to the prime minister of the country,” said Mike Weeks, Angkor CEO and husband of Delayne.

According to Buo Lam, a member of Parliament, Angkor is doing just that as well: “Angkor Gold always takes care of Cambodians. They are closely working with the government and support the people and the schools every day.”

Despite this high degree of social involvement and investment, Delayne Weeks is adamant the company is not just in Cambodia to get a warm and fuzzy out of it, “We are all in it to make some money to get a return on investment,” but everybody gets a share.

“We believe it’s the only way to do business. You take a look at all of your stakeholders and say: how can we build a sector or a business so there is value for everyone,” she added. Both Mike and Delayne have put their money where their mouths are and have invested more than $2.5 million of their personal funds in the venture.

Because the company involved locals and politicians from day one, it currently holds the largest tract of land concessions granted to a single exploration company; and this in a country, which so far does not have even one single commercial mine in operation. Devastated by civil and regional wars, it is far behind other countries in the region, like Laos and Vietnam.

We believe it’s the only way to do business. You take a look at all of your stakeholders and say: how can we build a sector or a business so there is value for everyone.
— Delayne Weeks, VP of corporate social responsibility, Angkor Gold

But the potential is huge. “There is mineralization everywhere,” said Kurtis Dunstone, Angkor’s chief geologist. The minerals can be extracted at a relatively cheap price: “Costs of mining and everything here is just significantly lower,” he said, compared to other markets.

With the help of Angkor’s exploration work, Mesco Steel Group of India is about to open the country’s first commercial gold mine at the end of 2015. They are currently in the process of obtaining a mining license, which includes an assessment of the impact on the environment. However, the company seems to be confident of getting it, as the first structures are built already.

“When Angkor Gold called us, we were looking in India and Burma. When they said that this is ready, we came here instead,” said Harish Sharma, Mesco’s chief geologist.

When they said that this is ready, we came here and everything worked out.
— Harish Sharma, Mesco Steel Group.

Angkor received $1.9 million for the project from Mesco and will receive a 7.5 percent net smelter royalty on any gold Mesco sells after the refining process.

Mike Weeks thinks this cooperative strategy will work in the future as well. “We will continue to develop our 30 plus prospects, and look for like-minded mining companies to develop them in a socially responsible manner.  We certainly maintain plans to develop several of the projects ourselves.”

Some of the projects show even greater potential, although sample results haven’t been confirmed by extensive drilling.

In order to attract future joint venture partners, Angkor will conduct extensive drilling in these areas, which is expensive: All-inclusive costs can reach up to $175 per meter.

The company just raised $1.4 million and has a transaction option for another $6.8 million with Chinese investor ToHui Beishan Group.

In the process, Mike Weeks made the conscious decision to bypass the step of undertaking expensive global compliance standards in order to be able to call the findings “proven reserves.”

“In order to get proven reserves [by completing and publishing a NI 43101 compliant resource], we would have to spend several millions on drilling at a single location,” Weeks said, something he doesn’t think is effective in this market.

“We prove enough for a minimum of economic development, and then move forward ourselves or find a partner to develop it into a producing mine. If we get drill results like we got for the Mesco project, we can develop it ourselves or other companies will be very interested in doing a joint-venture with us.”

If everything works out, everybody will be happy. Local people benefit from jobs, education, and other types of economic development aid. Mesco and Angkor make money for their employees and their investors as well: The stock price (CVE:ANK) is up 60 percent over one year compared to minus 45 percent for the average junior mining stock.

The Cambodian government receives license payments as well as a 3 percent royalty on any gold that comes out of the ground—and it gets its land back after the lease expires.

For Mike Weeks, it’s a win-win-win situation: “Wherever you are, you want to treat people like you want to be treated. So to me there is little risk in being socially responsible and the benefits are huge.”