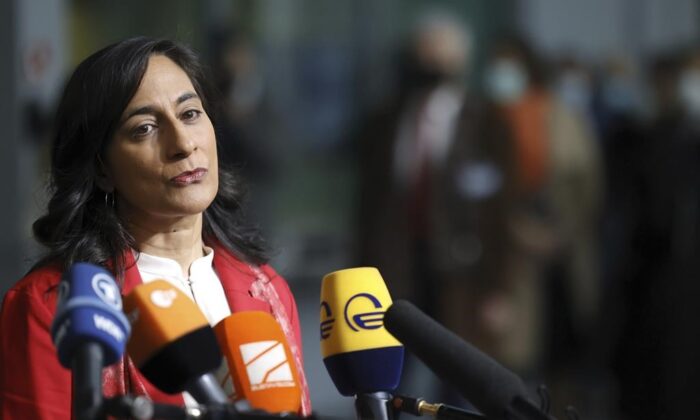 Canadian Defense Minister Anita Anand speaks with the media as she arrives for a meeting of NATO defense ministers at NATO headquarters in Brussels, Feb. 16, 2022. (AP/Olivier Matthys)
Canada

OTTAWA—Defence Minister Anita Anand says the Canadian military is weighing its capacity to send reinforcements to bolster NATO’s eastern flank given its numerous other commitments at home and around the world.

But the minister isn’t saying when such an assessment could be finished, or when the Liberal government will decide if or how Canada will support the military alliance in its standoff with Russia.

The comments come this afternoon as Anand wraps up two days of meetings in Brussels with counterparts from the 30-member NATO alliance.

Defence ministers from the U.S., Canada and across much of Europe spent a good deal of that time discussing the best way to respond to Russia’s buildup of troops on its border with Ukraine.

Anand notes Canada is already leading a NATO battlegroup in Latvia that includes 540 Canadian soldiers, and has increased its support to Ukraine in the face of Russia’s recent actions.

But while Anand says she is in discussions with senior military leaders and members of government about additional commitments, the minister maintains she will be methodical and “very careful” in assessing the situation before the government makes any announcement.