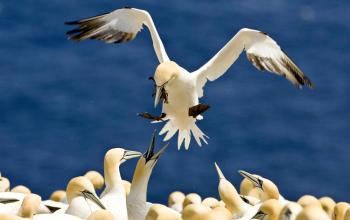 Northern gannets of Bonaventure Island in Quebec, home to an estimated 55,000 gannet pairs. The gannet is among the millions of migratory Canadian birds that could be flying into potential danger as a result of the BP oil spill. (David Boily/AFP/Getty Images)
US

Migratory Birds Heading for Gulf at Risk From Oil Spill

Migrating south could be a perilous undertaking for dozens of species of Canadian birds that over-winter in the Gulf of Mexico or use it as a resting and feeding ground before continuing on to Central or South America.

Of the estimated 4 billion waterfowl and shorebirds that migrate annually, well over a billion will go through the Gulf region where they could be flying into potential danger because of the BP oil spill.

Biologists fear that when the birds arrive at Gulf marshes and shorelines—tired and hungry after their long flight—they will encounter fouled nesting sites and a scarcity of food.

“I would say with complete confidence that there’s going to be big impacts—we just don’t know how big,” says Ted Cheskey, manager of bird conservation with Nature Canada.

“[The oil] is going to get into the groundwater, it’s going to work its way up into the ecology and the eco-system, and a lot of these birds feed on things that are down in the ground in the soil and in the earth—the shorebirds, they all do that.”

And it’s not only the oil on the shorelines and in the water that poses a problem. The hundreds of thousands of gallons of dispersants used to get rid of the oil are also a threat to the birds, says Cheskey.

“We’re talking about solvents and some very toxic chemicals. … That stuff has a sort of reverberating affect right along the eco-system. It destroys plankton, which is the base of the food pyramid. Lots of the small organisms eat plankton and the fish eat plankton and the birds eat the fish, so there’s this whole ecological affect.”

“So the food supply just won’t be there either.”

Although the spill has been finally plugged, that doesn’t mean the oil is gone, he adds. “People find oil from spills from 30 to 40 years ago still in the sand and in sediment and places. So the affects of these things are very, very long term.”

For many of the birds heading to the Gulf, their journeys begin in the Canadian Arctic, the boreal forest, the Saskatchewan wetlands, and Atlantic Canada, which has huge seabird colonies. The Northern Gannet colony on Bonaventure Island in Quebec is thought to be the largest gannet colony in the world, with more than 100,000 birds.

Snow geese, loons, ducks, pelicans, swallows, herons, terns, and grebes are among the species that could be flying into trouble as they follow their migration path. Endangered species such as the piping plover from the Great Lakes and the whooping crane also migrate to the Gulf region.

The U.S. government is currently funding a $20 million project to flood fields and create marshes in an effort to give the migrating birds—which come from as far north as Iceland and Alaska—an alternative place to go.

“There's a sense of urgency here,” Kevin Norton, head of the U.S. Department of Agriculture's conservation programs in Louisiana, told New Jersey’s Courier-Post. If the oil causes a lot of bird deaths, “that will ripple through the populations for years to come,” he said.

As part of the project, farmers across the five Gulf States as well as Arkansas, Georgia, and Missouri are inundating fallow fields in the hopes of helping the birds. However, it is not known whether the birds will use these unfamiliar wetlands.

Cheskey says the migration patterns are so well established that the birds have a strong tendency to go to the same places every year. “These are hard-wired responses to thousands of years of evolution.”

There’s also a concern for the songbirds, such as swallows and warblers, that depend on the coastal areas of Louisiana and Mississippi, he says.

“The songbird migrations are timed for the hatching of midges, the different types of flies and things that come out of the coast waters, the brackish waters. They're like the food bonanza that’s kind of able to keep them going. So if the oil is to work its way into these coastal eco-systems and affects those habitats …. they're going to be coming back to their breeding grounds in a compromised state and that will affect their reproductive success.”

Another potential hazard for migrating birds are the “huge billowing clouds of black smoke” from the practice of burning off collected oil, along with the hydrocarbons that are released into the air as oil evaporates, says Cheskey.

“So who could really say the effect of that? They say people working down there are getting sick and can only be out for so long. So it's very hard to say the impact on birds let alone all the things that they eat. A lot of them eat things that are flying around, insects and so on, and so the potential is there.