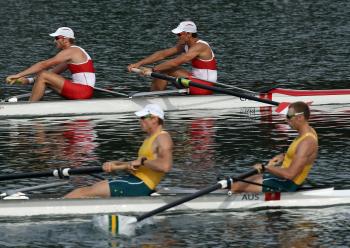 The Canadian Olympic Team’s week-long medal drought came to an end Saturday as David Calder of Victoria, B.C. and Scott Fradsen of Kelowna, B.C. won the silver in the men’s pair rowing final with a time of 6:39:55, two seconds behind the first place Australian team.

"I'm really proud of it and Scott is really proud of it," Calder told The Canadian Press. "The Australians had a great push through the middle. We pushed back a little bit but congratulations to them. They definitely deserved that. We're very happy with a silver medal today."

Fradsen said that although they are definitely happy to be the first Canadians to win a medal in these games, they were simply focused on success.

In rowing, Canada will race in four finals on Sunday, including the much awaited men’s eight. The national team will also face off in the women’s eight, the lightweight men’s four, and the lightweight women’s double.

According to Hazelton Mayor Alice Maitland, the small northern B.C. town erupted in celebration early Saturday when they realized Huynh would win the gold.

"We had to restrain the firemen from running around town with the fire trucks ringing the sirens. Everybody's just overjoyed. Nobody deserved it more than she. It's great," Maitland said.

Verbeek’s hometown of Beamsville is also happily celebrating according to Sean Verbeek, the medalist’s brother.
"You're going through town and you're seeing probably 30, 40 people wearing these shirts that has her name and 'Beijing 2008' – they're red with the Canada flag," he said. "We had them hanging out the vehicles honking the horn this morning."
Canadian Prime Minister Stephen Harper offered his congratulations to the medalists as well.

“We are extremely proud of Canada's Olympic team competing in Beijing. Each day, our athletes exhibit dignity, respect, and dedication to their sport and to their country,” said Harper in a statement.

It was a bigger day for Canada as University of Victoria student Ryan Cochrane won Team Canada their fourth medal after he took the bronze in the 1500 meter men’s swimming event.

"It was a hard race. I think the first half took a lot out of me for the second half. I just couldn't be happier," said Cochrane.