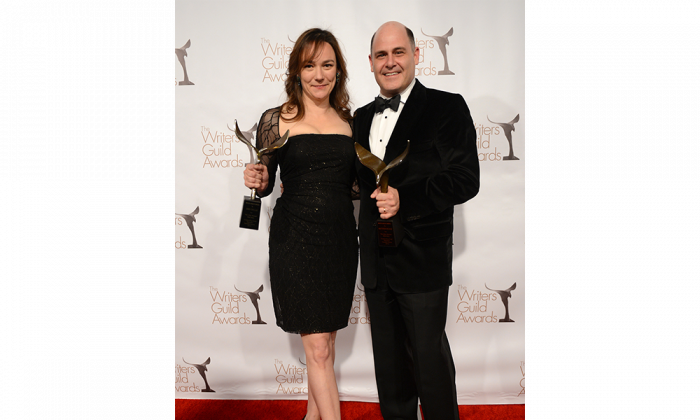 TORONTO—”Mad Men” creator Matthew Weiner has long known how he wanted to wrap up his iconic AMC drama. Nevertheless, actually nailing down that plan was not easy, says Calgary-raised writer Semi Chellas.

“He really knew where he wanted to go and where he was leading us. And so that helped us get there. But it was very difficult,” Chellas said in a recent interview from Los Angeles.

The first of the show’s final seven episodes ran on April 5 and Chellas was tight-lipped about anything that could be construed as a spoiler.

But she peppered a 30-minute chat with her favourite anecdotes about Weiner, who she calls a “kindred spirit,” stories about writing-room arguments, and how she was inspired by the beloved Canadian series “Slings and Arrows.”

The Canadian Press: How are you feeling?

Chellas: I’ve always felt spectacularly lucky to have ended up on what was by far my favourite show of all time, because I came on for season 5 and I was a crazed fan. … And now I feel really lucky because it’s been six months since we finished, more—we finished last July—and I drive around and I see the billboards and it feels like a dream that I was part of it.
I’m like: ‘I can’t believe it, “Mad Men” is coming on and I know what happens!’

CP: Did you treat these final seven episodes any differently?

Chellas: Matt always says that he wanted each episode to play like a movie with its own sort of wholeness and its own sort of themes. … And I think that that sort of speaks to how we treated this season—it was one thing, it was two things, and it was also 14 things, you know?

And I know Matt doesn’t want to speak to where it begins or anything like that, but I do think that the two seven-episode arcs are like two sides of a coin, or parts of a whole.

CP: And the ending is satisfying for you?

Chellas: Very satisfying for me. I was running the writers’ room for these last few (episodes) and so it was a change, because the same people had been in the room for all six seasons previously and then they left to pursue pilots of their own. … And also being from Canada, I had done and also watched lots of six- and seven-episode series—it’s so much more common in Canada and I really loved that, I love that length.

One of my favourite things of all time was ‘Slings and Arrows,’ which I think was six episodes every time. It’s a tease but it’s also a different kind of a completeness when you do a little story like that.

CP: What was the mood like in the writers’ room?

Chellas: There was a point where we … couldn’t move ahead, and by virtue of not moving ahead while we were shooting we were getting more and more behind. And I was like, ‘What is wrong with this story? It keeps getting thrown out, it keeps coming back.’

I went away for a day and I came back and it was all new. And then it went back. And then I realized … we collectively had a resistance to finishing. We were sort of seeing the light at the end of the tunnel but it was blinding us and we were blaming the stories. … I think we actually had a collective psychological resistance to moving towards the end.

CP: How much influence did you have over the ending?

CP: The show has become such a cultural phenomenon. Did you feel that weight on your shoulders?

Chellas: Matt was very good about setting outside of his mind what the reaction would be. Because as much as it matters to you, you can’t control it. And you know Matt (worked) on the end of ‘The Sopranos’ and that ending … I think that ending was perfect. But it was highly controversial at the time and people were mad and people were freaking out and I think that whenever a show becomes a hit, everyone feels a little bit of ownership of it and makes it really special. But in the end, you can’t end a show by democracy.

CP: What do you miss most about the show?

Chellas: I really, really miss the writers in the room. It’s funny to have been out now for eight months and writing my own stuff and working on my own—which is a very solitary thing that I have mostly done in my life and career—but the amazing wisdom and the different experiences, the different voices that were collecting in the ‘Mad Men’ writers’ room, were so mind-blowing.