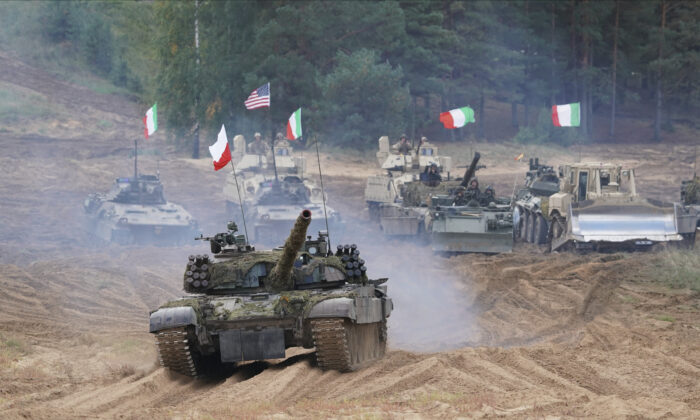 Military vehicles and tanks of Poland, Italy, Canada and United States roll during the NATO military exercises ''Namejs 2021'' at a training ground in Kadaga, Latvia, on Sept. 13, 2021. (AP/Roman Koksarov)
Canada

OTTAWA—The Canadian commander of a multinational battlegroup in Latvia says he is working to ensure his troops have enough supplies and can talk to each other, as mounting tensions between the NATO military alliance and Russia feed fears of a new war in Europe.

Canada has more than 500 soldiers in Latvia as part of a broader NATO reassurance mission first launched in 2017 in response to concerns about Russian aggression across eastern Europe.

The Canadian contingent includes about 350 troops primarily from Valcartier, Que., who form the core of a 1,000-strong NATO battlegroup stationed in Camp Adazi, about 30 kilometres northeast of the Latvian capital of Riga.

That battlegroup also includes military personnel and equipment from nine alliance nations, including Poland, Spain, Italy and the Czech Republic, all of whom fall under the command of Lt.-Col. Dan Richel.

In an interview with The Canadian Press on Thursday, Richel said one of his main responsibilities since taking command last month has been to make sure the different contingents are able to quickly and accurately communicate with each other in the field.

“English is a second language for pretty much everybody in the battlegroup right now,” he said. “They’re all NATO countries, obviously, so their tactics are generally the same. We just need to make sure everybody has the same understanding of all the terminology.”

Clear communication would be critical in the event of a Russian invasion, against which the battlegroup is specifically designed to defend. Also important: making sure the NATO force has fuel, ammunition and other supplies to fight.

The battlegroup is designed for conventional warfare, meaning battle with a similar army such as Russia’s. While Canada’s contribution is mainly infantry with armoured vehicles, other partners have provided tanks, artillery and other equipment.

The Canadian commander said the battlegroup’s primary focus is to train and prepare for a possible attack—as has been the case since its inception five years ago.

“The battlegroup itself is already a high-readiness combat unit,” said Richel. “I would suggest that what you see here today is very much what you would have seen on the other rotations as well.”

In addition to those dedicated to the battlegroup, Canada also has about 200 support personnel as well as a headquarters staff in Riga responsible for big-picture planning and co-ordination of NATO efforts in Latvia.

Similar battlegroups led by Britain, Germany and the United States have been established in Estonia, Lithuania and Poland, respectively. The Liberal government has said Canada will lead the mission in Latvia until at least March 2023.

Designed to defend against a Russian invasion, the battlegroups’ small size means they would almost certainly be overwhelmed in a real war. Instead, their main purpose is to deter against Russian aggression, with the idea that an attack on one would draw in all of NATO.

The Russian government in recent weeks has demanded the alliance withdraw all its forces from the region, including those in the Baltics and Poland, after mobilizing about 100,000 troops on Russia’s border with Ukraine.

Canada, the U.S. and other NATO members have rejected the demand, leading to growing concerns about armed conflict between the two sides that could start in Ukraine and expand to the rest of eastern Europe.

“We’re in Latvia to defend the Baltic states—Latvia, Lithuania and eastern European states—from any incursions by Russian forces,” he said in French during a COVID-19 briefing in Ottawa. “We will continue the important work that NATO is doing to protect its eastern front.”