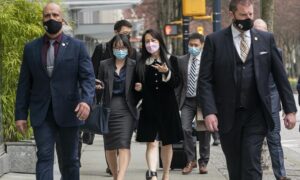 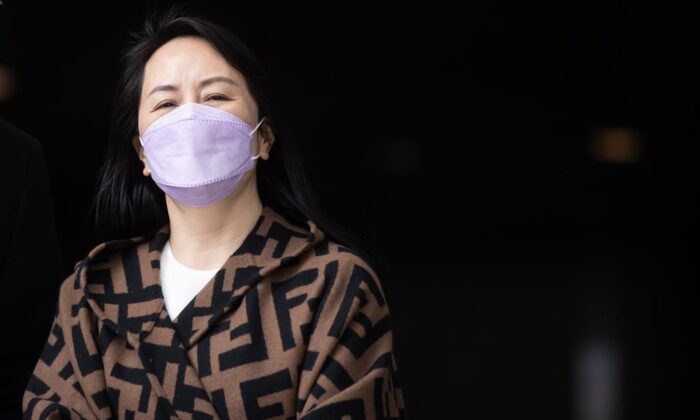 Meng Wanzhou, chief financial officer of Huawei, returns to B.C. Supreme Court after a break from her extradition hearing, in Vancouver, B.C., on March 31, 2021. (The Canadian Press/Darryl Dyck)
Canada

Associate Chief Justice Heather Holmes said on July 9 that the application by Meng’s lawyers to use the documents obtained from HSBC through a Hong Kong court is denied.

“Ms. Meng applied to induce evidence in the extradition hearing a number of documents she received from HSBC. My decision is that the application is denied, the HSBC documents will not be admitted,” Holmes said.

Her reasons for the decision will follow, she added.

Lawyers for Meng told the judge in June that the documents include internal email chains and spreadsheets that undermine the allegations of fraud against Meng, proving the United States misled the court in its summary to Canada of the case against her.

Mark Sandler and his colleague Scott Fenton, lawyers for Meng, argued that the record of the case prepared against their client by U.S. prosecutors, and shared with Canadian officials to justify her arrest, was not an accurate description of HSBC’s knowledge about Huawei’s control over the company Skycom.

Meng is accused of lying to HSBC about Huawei’s control of Skycom, putting the bank at risk of violating American sanctions against Iran.

Both she and Huawei deny the allegations against them.

Lawyers for Canada’s attorney general asked the judge to dismiss Meng’s application to allow the new evidence, saying the argument is more appropriate for her fraud trial expected in the United States, not her extradition hearing in Canada.

The judge’s decision is the latest in a series of applications and arguments by her lawyers introduced to prevent Meng from being extradited.

Meng’s original extradition hearing had been scheduled for last April but the judge granted her lawyers more time to review the documents from the Hong Kong court. The extradition case is now set to begin Aug. 3.

Meng’s arrest at Vancouver’s airport in December 2018 at the request of the United States has created friction in relations between Canada and China. The arrests and detentions of Canadians Michael Spavor and Michael Kovrig shortly after Meng’s arrest are widely seen as retaliation by the Chinese government.

Meng remains out on bail, living in one of her two multimillion−dollar homes in Vancouver with her husband and children.