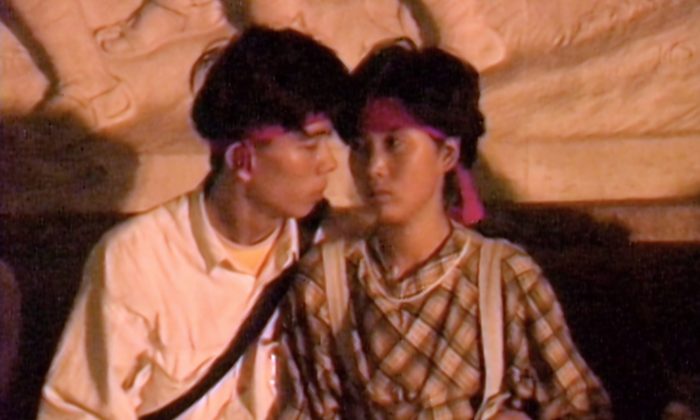 Screenshot of a young couple seated on the top step of the Monument to the People’s Heroes in Beijing on June 4, 1989. Canadian journalist Arthur Kent shot this video around 3 a.m., before the army completely blocked off the east side of Tiananmen Square. (Courtesy Arthur Kent)
By Omid Ghoreishi

In May 1989, when veteran Canadian journalist Arthur Kent wrapped up his assignment on the war in Afghanistan and relocated to Beijing, he had no idea he’d be reporting on one of the watershed moments of the 20th century.

Kent, who has reported for leading networks and won Emmy awards for his international coverage, was among the foreign correspondents reporting on the 1989 pro-democracy protests in China, and the Chinese regime’s violent crackdown, which became known as the June 4 Tiananmen Square massacre.

“I was very shocked and disappointed to see martial law turn into a violent crackdown. But I was ready, as the other journalists who covered the massacre were. We just did the best we could,” Kent said in an interview.

Now, on the 30th anniversary of the massacre, Kent has produced a short film titled “Black Night in June.” With Kent as the narrator, the film features his own footage showing the People’s Liberation Army pushing into Tiananmen Square and the protesters’ reaction.

“Many people have asked me what it was like, what really happened in Tiananmen Square? I wanted to show people,” he said.

The film shows armed forces moving along Chang’an Avenue toward Tiananmen Square, then firing live rounds into the huge crowd of protesters, which consisted mainly of young students.

The protesters respond by shouting “forward,” while throwing objects at the soldiers and trying to block their path.

“You could sense this instinct among them all, an instinct to resist,” Kent says in the film.

The army eventually pushes through the barricades. In one scene, the protesters force a tank to stop and one of its occupants is captured and beaten as he tries to flee; shouts from the crowd ask for the beating to stop.

“It wasn’t about us, the foreigners witnessing this. It was about the protesters. Those kids were staring down the world’s largest standing army,” Kent says.

The film shows medical students and doctors trying to save the lives of wounded protesters, as the sound of gunshots gets closer and closer.

Kent said he put in considerable effort to convert his footage into high-definition digital format, and provided translation for what the students were saying and what the authorities were shouting through megaphones. He wanted viewers to see how events unfolded, how the army told the protesters to “leave or die,” and how the students demonstrated “bravery in trying to help their wounded friends and evacuate them.”

Toward the end of the film, a young couple is shown sitting by the Monument to the People’s Heroes, with the woman seemingly becoming concerned as she notices Kent’s camera focused on her. Kent explains in the film that he pulled his head back from the camera so she could see that he was a foreign journalist, and not filming on behalf of the regime.

“Why did that young woman look at me with suspicion? Because in a repressive, killing incident like that she was afraid. She wondered, is that person with a camera recording this for the government? Because she had every reason to fear that that might be the case.”

Kent said he didn’t want to leave the scene, but he felt a professional responsibility to get his footage to the networks in case the authorities tried to detain him and confiscate his footage, as was his experience a week before the massacre.

He recalls that he put his camera under his arm like a football and began “running like a halfback,” making his way out of the area, noticing at the same time that the troops were looking at him. Once he was on the surrounding streets, he saw plainclothes police arresting people, especially journalists with cameras. One of his journalist colleagues was captured by a group of soldiers, who beat him while uttering  phrases like “beat the pig.”

Kent was also almost caught after a group of police officers spotted him and began to chase him, but he ran away and eventually hitched a ride with a rickshaw driver. Once reunited with his colleagues, they arranged for the footage to be hand-carried to Hong Kong and Tokyo to be broadcast. He left China a few weeks later.

Kent says he decided to make the film available on his website, skyreporter.com, so that more people can learn what happened during the deadly incident.

The film ends by showing an open letter by “Tiananmen Mothers” addressed to the Chinese regime leader, asking for “truth, compensation, and accountability” for the massacre that claimed the lives of their children.

“After all these years in China, they are courageous enough to tell the big man of the Communist Party that you need to account for this,” Kent says. “Imagine the surveillance, the harassment, the threats they are subjected to, but they endure it. These are great people.”