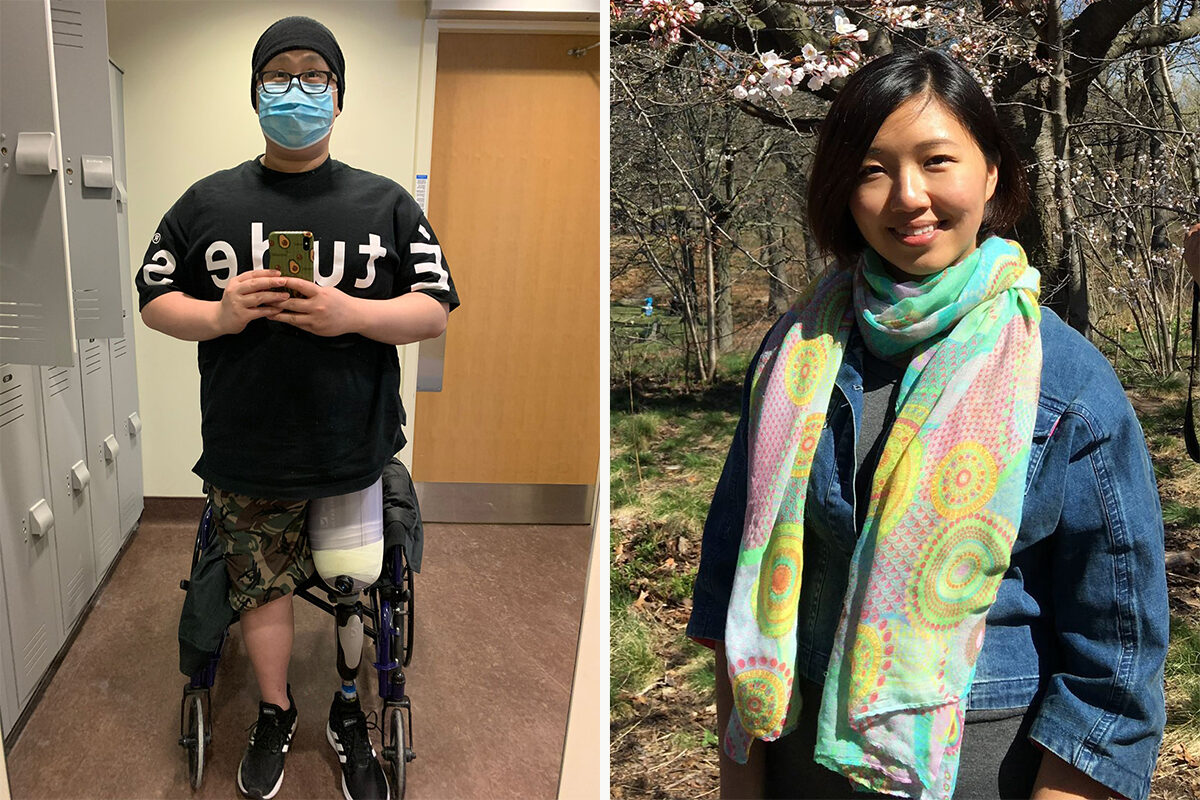 Mavis, a Canadian immigrant, opened a department store for his cancer-stricken brother. At the same time, she hoped that the place would become a community store and a rendezvous of Hong Kong people. To show her support of the "Lifeboat Programme" she took hiring Hong Kong people there as a priority to help the newly arrives. (Courtesy of Marvis)
Hongkongers' Story

The year 2019 was an extraordinary year for Mavis and her family. As a Hongkonger who emigrated to Canada this was particularly harsh to swallow. She was then 10 months into her pregnancy and was expecting the arrival of the new-born anytime soon. Just as life and work of the two siblings (Mavis and her younger brother, Gary) were getting on the right track, the news that Gary was diagnosed with bone cancer, upended all those and made her feel completely devastated. Coupled with all the news received daily via the mobile apps about the social unrest in Hong Kong, Mavis was doubly worried. She said to her herself, “I am in Canada for a stable environment, what can I do for Hong Kong people who are behind bars?” Very quickly an idea popped up in her mind…

Three years ago, Gary started to feel discomfort in his feet. The pain was so severe and soon became unbearable. He went to the hospital for an examination and found that there was a tumour in his foot, and he was indeed suffering from bone cancer. He was only 28 years old and was supposed to be in his prime. Amputation at such an age, even if he survived, trying to find a job with only one leg would be difficult. Mavis herself used to work as a buyer at a health care products chain. While looking for suitable health care products for her younger brother, she had a new plan on her mind, “Why don’t I open a department store so that I can help my younger brother find health products, and help him solve the problem of finding a job?”

A Success Story of ‘Life After Trauma’

After recovery from bone cancer, Gary proved himself to be a vivid example of how young people can overcome physical and mental difficulties and re-join society,

Gary used to work in catering, but after being hospitalized with bone cancer, he was no longer able to do his old job, and he had to face the harsh reality of needing to amputate a limb, all of which brought huge changes to his life. Mavis felt sorry for the difficulties which her brother faced and used her past skills to find suitable health care products for him, and to take care of him in life as much as she could. During Gary’s rehabilitation after surgery, she found some deep-sea fish oil from Norway, which has anti-inflammatory properties that could relieve his pain. Mavis shared, “What happened to him really needed encouragement from those around him. Our family supports him and takes care of him all the way.”

It was a great relief to Mavis that Gary’s condition was improving day by day. However, the next problem was how could he re-join society. To tackle this, Mavis decided to quit her full-time job, and start a company to help her family solve the employment issues. With this she would be more flexible to take care of her young daughter too. She encouraged her younger brother to start anew and learn to step into a new field, “His own will is paramount, and his willingness to step out to society again is equally important. The whole new future will be vastly different from the past, but we just made him feel, rest assured, there will always be someone he can call upon.”

From the initial online department store platform to opening a physical store, Mavis moved forward step by step, and invited her younger brother to participate. “He can do some background work, such as some technical support, website, or update programming, and the likes. He can also do customer service and other work, which is a significant role change for him.”  Later, after Gary installed a prosthetic limb, he coul move more easily, and even helps the store deliver goods. Mavis is very gratified that her younger brother can start afresh after suffering all those blows of life.

Each Product Should Have a Story of its Own

One of the objectives of Mavis’s physical stores is to sell products with stories, hoping to break the monopoly of large groups. In the past when Mavis worked as a buyer, she found that the current way of operating health care product chain stores, was not the way she preferred. “Chain stores are actually selling business rather than selling products. They are mainly trying to get investors to join in.” For her, selling products with their own stories is more important.

When looking for a product, she would like to know the thinking behind each brand, from material selection to production. She gave an example. A few years ago, she met Kimature, a skin care brand, made in Hong Kong. Its ace product is the white orchid skin care product series. She contacted the founder of the brand, Kim, and was even more moved after learning about the story behind it. Bringing the taste to Canada and hoping that “Made in Hong Kong” will be famous overseas too.

At first, Mavis just started with an online community site to share health and lifestyle products from all over the world. Later she decided to open a physical store. She named it “Truly Healthy” (Organic  Living Market). In that way, Mavis wanted to express an attitude towards life. She felt that many high-quality products could not be bought on big shopping sites, and people did not necessarily buy from big brands. The way that the big brands monopolise the market is definitely not healthy. Now when people are getting used to shopping online, many local brick-and-mortar stores may disappear. Especially after the pandemic that had swept the entire world, Mavis cherished the existence of physical stores even more. “Physical stores are rooted in the community. We want to reach customers directly, not just placing an order by pressing a button. It can also be turned into a small market inside the store, which from time to time, we can invite the person in charge of a brand to come and introduce the product and communicate directly with the customers.”

From Skin Care to Fish Oil to ‘Lifeboat Scheme’

Another development direction started by Mavis is, direct investment in production lines. Her brother’s cancer recovery experience also prompted her to have a better understanding of the efficacy of deep-sea fish oil. She personally contacted the technical team and obtained the authorisation from Northern Europe as their exclusive agency. By chance, from an initial starting point of helping her brother, she now has a new line in her career growth, for which Mavis is equally optimistic.

Now Mavis decides to use her status as an employer to give support to the “Lifeboat Scheme” to help immigrants from Hong Kong. She herself came to Canada to study since her second year in the secondary school education. Since then, she studied and worked in Canada all the way, and has already fully integrated into the local environment. However, she has never forgotten her “roots” as a Hongkonger. In between study years, during her holidays she would go back to Hong Kong to visit relatives. She also took the initiative to set up the Hong Kong Student Union during her time in university, recruited volunteers to promote Hong Kong culture, and offered language classes to teach foreigners Cantonese. She feels that Hong Kong people even when residing in foreign countries have a mission to preserve Hong Kong’s culture, in whatever forms possible.

After the Hong Kong national security law came into effect, the Canadian government launched the “Lifeboat Scheme” in early 2021, by relaxing work permits and immigration applications, as well as issuing special 3-year work permit visas for eligible Hong Kong people. All these can eventually transition to permanent resident status. When Mavis heard about the news, she also hoped that she could offer help to Hong Kong people who wanted to emigrate to Canada. To do that she posted job openings online, to recruit Hong Kong people to work in Toronto.

The employees working in her store now, all came through the “Lifeboat Scheme.”  She did not know them before, and she accepted them with just trust in her heart. Mavis believes that nowadays, more and more people are leaving Hong Kong, and it really takes courage for anyone to start over in a new place. Now that she is opening a shop, she will try her best to help young people who have left Hong Kong, for as long as she can afford to hire. This all starts from mutual care for each other, and it is also the spirit of mutual assistance among Hong Kong people overseas.

After three years of entrepreneurial experience, Mavis has survived the most difficult days, and is gradually seeing the light at the end of the tunnel. After the pandemic, Toronto finally lifted its lockdown in March this year (2022), cancelled the mandatory mask in public order, resumed market trading and all other activities. The store jointly operated by Mavis and her younger brother, has also begun to flourish. Now Truly Healthy runs two small shops, located in Markham and Mississauga, respectively. Mavis specially placed a round table in the shop to welcome regular customers to chat and hope that the shop will become a gathering place for Hong Kong people, as it is a way to encourage everyone to integrate into the community as soon as possible and start a new life.