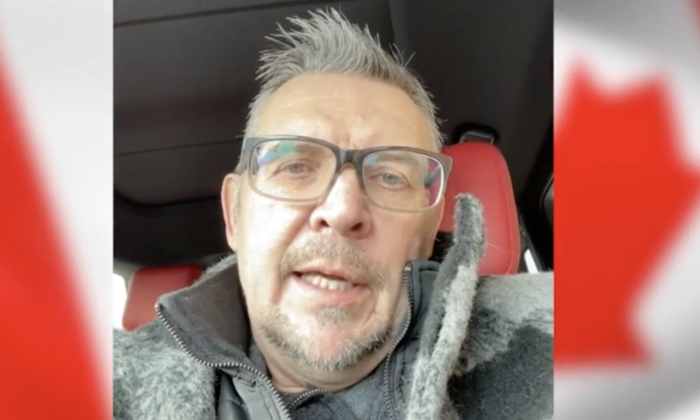 Former National Hockey League player Theo Fleury in an interview with NTD's Capitol Report, on Feb. 7, 2022, in a still from video. (NTD/Screenshot via The Epoch Times)
Canada

Canadian Hockey Star: Ottawa Protest Against Mandates ‘Biggest Event’ in Over a Century

“It’s probably the biggest event that’s happened in our country in 150 years, you know, we’ve never seen anything like this,” Fleury told the host of NTD’s Capitol Report, Steve Lance, in a Feb. 7 interview.

“I cried a lot of times just because of the amazing energy which this country has shown in the last, you know, probably two weeks, it’s been incredible,” Fleury continued.

Fleury said citizens are tired of lockdowns, vaccination mandates, and the digital passport requirements being implemented by the “corrupt” government.

“We have a prime minister who is incredibly divisive, his rhetoric is beyond disgusting, and it needs to stop. … We love our country, and we want our government to get the hell out of our lives once and for all,” said Fleury.

In response to the trucker Freedom Convoy, Canadian Prime Minister Justin Trudeau accused participants of violent, disrespectful, and racist conduct. On Feb. 7, during a speech in the House of Commons about the Freedom Convoy, he said that the demonstration had blocked democracy and the economy.

Fleury said the truth is that the Canadians who are protesting love their country and want the government to have less power over their lives. “The truth is coming out, you know, and a huge light is shining on the truth and everybody’s talking about the truth.”

However, Trudeau appears to be taking a hard stance toward the protestors and their demands for freedom from mandates.

“From the beginning of this demonstration, our government has been in close contact with the mayor of Ottawa, and municipal and provincial officials. So far, the RCMP has mobilized nearly 300 officers to support the Ottawa Police Services and is ready to do more,” said Trudeau.

“Yesterday, the City of Ottawa declared a state of emergency. We’re convening a table with the relevant federal and municipal partners to further strengthen our response. The federal government will be there with whatever resources the province and the city need, in this situation,” added Trudeau.

Fleury said that except for a few conservative news organizations, Canada’s mainstream news outlets are lying about the truckerss’ Freedom Convoy. “It is just straight propaganda 24 hours a day, seven days a week on our mainstream media, and they are just outright lying.”