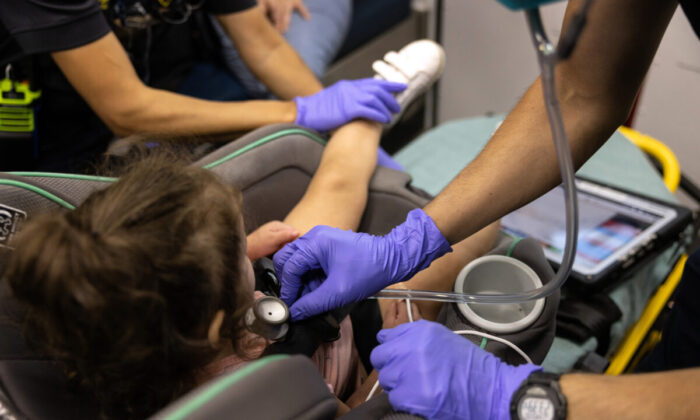 A medic prepares to transfer a young girl to a hospital in Houston, on Aug. 25, 2021. (John Moore/Getty Images)
Canada

The Public Health Agency of Canada says it is investigating cases of mysterious, severe hepatitis found in children across the country.

The federal agency told The Epoch Times that it is working closely with the international community to understand the outbreak, which has affected almost 200 children around the globe.

“The Public Health Agency of Canada is working with its international partners as well as provincial and territorial partners to gather information on this evolving situation,” the agency said in an email on April 28.

“Potential cases in Canada are being investigated further to determine if they are related to cases in the United Kingdom and the United States. We will continue to provide updates as the investigation evolves and new information becomes available.”

On April 23, the World Health Organization (WHO) broke the news that at least 169 cases of acute hepatitis of unknown origin have been reported from a dozen countries, with the UK having the most at 114.

The WHO noted the hepatitis cases involved children aged 1 month to 16 years old, many of whom suddenly developed gastrointestinal symptoms including abdominal pain, diarrhea, and vomiting, before coming down with jaundice, which is a yellowing of the skin and whites of the eyes.

The organization also noted that most of them did not have a fever, and none of them had any of the five common hepatitis viruses—A, B, C, D, and E.

As of its last update, at least one child has died, and 17 children have required liver transplants after they contracted acute hepatitis.

Data from the European Centre for Disease Prevention and Control (ECDC) shows a similar trend to the WHO figures. On April 26, the ECDC estimated around 190 cases of unexplained severe hepatitis around the world, with the bulk coming from the UK at 111, mostly in children under 10 years old.

In the United States, the Centers for Disease Control and Prevention (CDC) issued a health advisory on April 21 after children in Alabama were discovered to have hepatitis infections and adenovirus, a virus that causes cold-like symptoms.

It reported a cluster of nine cases of the mysterious acute hepatitis in children who were admitted to the hospital from October 2021 through February 2022. It is now investigating whether there is a link between the current outbreak and adenovirus, though it stressed that the children were not hospitalized due to COVID-19.

“The first U.S. cases were identified in October 2021 at a children’s hospital in Alabama that admitted five children with significant liver injury (including some with acute liver failure) without known cause, who also tested positive for adenovirus,” the CDC said.

“Upon investigation, a review of hospital records identified four additional cases, all of whom had liver injury and adenovirus infection; laboratory tests identified that some of these children had adenovirus type 41, which more commonly causes pediatric acute gastroenteritis.”

According to the UK Health Security Agency (UKHSA), adenovirus was the most common pathogen found in 40 of 53 confirmed cases tested in the UK.

“Information gathered through the investigations increasingly suggests that the rise in severe cases of hepatitis may be linked to adenovirus infection but other causes are still being actively investigated,” said the UKHSA in a press release on April 25.

The British health officials also said they have ruled out possible links to COVID-19 vaccines.

“There is no link to the coronavirus (COVID-19) vaccine. None of the currently confirmed cases in under 10 year olds in the UK is known to have been vaccinated,” the agency said.

Reuters and Gabrielle Stephenson contributed to this report