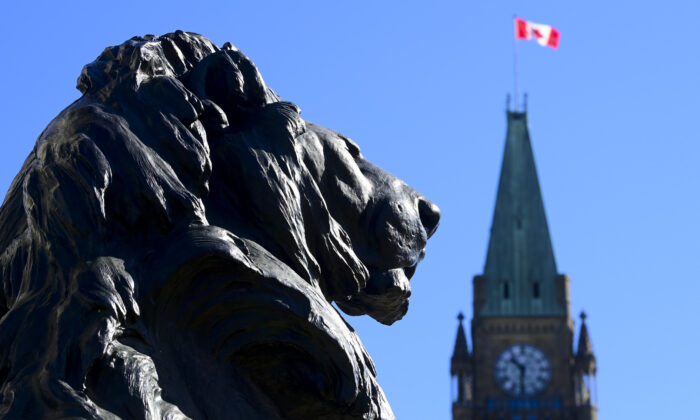 A sculpture of a lion is seen with the Peace Tower in the background on Parliament Hill in Ottawa on April 6, 2020. (The Canadian Press/Sean Kilpatrick)
Canada

Since the 2000-01 fiscal year, these governments have overshot both their expense and revenue targets, according to the report, published by the C.D. Howe Institute on Nov. 10. In particular, the governments entered the COVID-19 pandemic spending $3,100 more per Canadian and taxing $3,800 more per Canadian than they would have if they had met their past budget commitments.

Titled “Trouble on the Bottom Line: Canada’s Governments Must Produce More Reliable Budgets,” the report was co-authored by William Robson, CEO of the C.D. Howe Institute, and Miles Wu, a research assistant at the think tank.

“On average, Canada’s senior governments registered better bottom lines than they budgeted, but the cumulative impact of the overshoots means they are spending more and taxing Canadians more heavily than their budgets indicated,” the authors wrote.

They said this pattern of revenue overshoots being greater than spending overshoots “runs against conventional wisdom about the over-optimism of budget forecasts,” but it’s also concerning because projections that continue to miss results “raise important questions about fiscal policy’s behaviour over the economic cycle.”

Another concerning pattern is that the annual revenue and spending overshoots usually coincide, something that wouldn’t happen if the governments had responded to economic booms and busts “with normal stabilization policies.”

The authors said the pattern suggests that the governments “reacted to accidental or engineered revenue overshoots with in-year spending, or otherwise manipulated their reported numbers to achieve a predetermined bottom line.”

Robson and Wu also found it troubling to see “a recent tendency for governments to report negative adjustments ‘below the line’ in their financial reports,” referring to adjustments made to statements of operations below the annual surplus or deficit figure. These adjustments for “other comprehensive income or loss” get less scrutiny than revenues and expenses do, and such a practice signifies “deteriorations in their capacity to deliver services not anticipated in budgets.”

“While these adjustments are not, in principle, inconsistent with public sector accounting standards, they are an obstacle to accountability,” the authors wrote. “Ottawa, the provinces, and territories would be better placed to handle current fiscal pressures if their recent results had been closer to their budget projections.”

Robson and Wu warn that spending increases prompted by the pandemic will persist for years and that debt increases will last for decades. They said two threats loom as a result: greater temptation for governments to manipulate their bottom lines and greater pressure to raise taxes and cut services.

“Legislators and voters should demand more reliable budget targets and better adherence to those targets in the future,” they said.

The authors recommended several ways to increase Canada’s fiscal transparency and accountability. One is greater scrutiny by legislators, analysts, and the public of the interim revenue and expense numbers for the prior fiscal year at budget time, as those numbers provide vital information about what the government has done and expects to do. Another is stronger scrutiny of spending estimates.

Governments at the federal, provincial, and territorial levels should also release their main estimates at the same time they release their budgets, using the same accounting in both. This would let legislators see how each item they vote on aligns with the overall fiscal plan.

The authors also suggest more timely publication of interim and final financial results, which would provide timely information to alter the course when unexpected developments occur that could prevent the government from hitting its fiscal targets.

“If legislators do not react to late, missing, or misleading numbers from governments, or fail to exercise their authority to discipline governments whose actions do not match their commitments, and if voters do not support legislators who do call governments out, then fiscal accountability is a fiction,” the authors said.