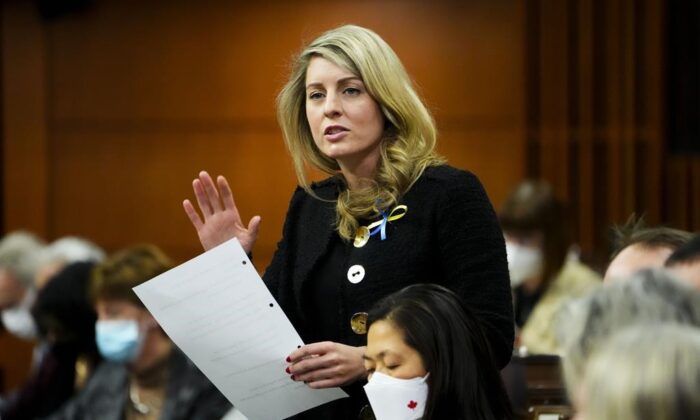 Foreign Affairs Minister Mélanie Joly speaks at the House of Commons in Ottawa in a file photo. (The Canadian Press)
Canada

Foreign Affairs Minister Mélanie Joly is calling on the Chinese communist regime to simmer down as it announced escalated military exercises around Taiwan following U.S. House Speaker Nancy Pelosi’s visit to the self-ruled island this week.

She also said Pelosi’s visit cannot be used as a pretext for China to justify its increasingly assertive actions against Taiwan, which she said raises tensions and destabilizes the Asia-Pacific region.

Joly noted that she had spoken with her U.S. counterpart, Antony Blinken, on the events in Taiwan and the position that the G7 countries will take, with a joint statement to be released shortly.

She said Canada needs to support Taiwan’s democracy and continue to engage with it economically, though adding that “our position regarding China’s policy has not changed.”

China, which has claimed Taiwan as part of its territory despite the fact that Taiwan is a de facto independent country, was irate at Pelosi for making a stop in Taiwan during her Asia trip that also included Singapore, Malaysia, and South Korea. Chinese state media had suggested that the Chinese military should “shoot” down Pelosi’s plane if she decided to travel to the island.

The Chinese military conducted live-fire exercises on July 30 prior to Pelosi’s trip to Taiwan, and it has more military drills planned for Aug. 4 to Aug. 7, with part of them expected to enter Taiwanese waters, according to local media.

While the Chinese embassy in Canada has not commented directly about Pelosi’s visit, it has reposted on its official Twitter account several statements from a spokesperson for Beijing, which threatens to take retaliatory measures against both the island and the United States.

Frank Fang, Gary Bai, and The Canadian Press contributed to this article.