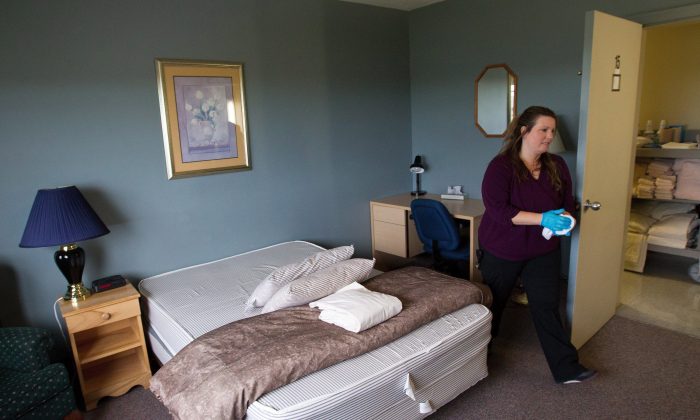 A civilian employee cleans a room at one of the barracks at CFB Kingston in Kingston on Nov. 23, 2015. anadian Forces bases across the country are getting ready to house Syrian refugees if the need arises. (THE CANADIAN PRESS/Lars Hagberg)
Canada

HALIFAX—Staff at Canadian Forces bases across the country are counting beds and making tentative plans to house and feed thousands of Syrian refugees expected to arrive in Canada in the coming weeks.

Capt. Evelyne Lemire, a spokeswoman at CFB Gagetown in New Brunswick, said they have not yet been told they will receive some of the 25,000 refugees the Canadian government has promised to accept by February.

But she said they have been asked to see how many they could accommodate at the sprawling base as part of what the military has dubbed Operation Provision.

“We’ve been asked to look at our options, our accommodations, and so on, like the numbers,” she said from the base near Oromocto. “We’re ready to receive any Syrian refugees, if we’re called on to do that.”

Lemire said the base at Gagetown is looking at everything from how to provide food and medical services to allocating space for religious practice for refugees from Turkey, Lebanon, and Jordan.

It’s expected that bases in Quebec and Ontario will be called on initially to provide interim lodging for refugees, with bases and wings in other provinces expected to follow suit after the first wave of Syrians arrives.

We’re ready to receive any Syrian refugees, if we’re called on to do that.
— Capt. Evelyne Lemire, CFB Gagetown

The Forces could be asked to temporarily accommodate up to 13,000 refugees.

The newly elected Liberal government announced its plans Tuesday to resettle the refugees, saying it will miss by two months a self-imposed deadline of Dec. 31 to bring 25,000 to Canada. The new target is to receive 10,000 people by year’s end and the remainder in the first two months of 2016.

Health and security screening will take place overseas and then refugees will be flown to Toronto and Montreal, largely on chartered aircraft.

From there, they will be spread across 36 different destination cities, which already have resettlement programs in place. Temporary accommodation will be provided by the military, if required.

It’s not clear how long they would be housed at the bases, but an official in the Defence Department says it will likely play out like it did in 1999 when Kosovar refugees were housed in bases like Gagetown, Greenwood, Aldershot, and Halifax in Atlantic Canada and others in Ontario. They stayed at the bases for roughly four months.

In Halifax, 12 Wing Shearwater may also be called on to take in refugees, but officials were still figuring out how they would accommodate both families and individuals in large barracks and other facilities.

The Forces have said they want to use empty beds and not displace military members, but may have to do some shuffling of personnel at bases in Valcartier, Que., and Edmonton.

“Some people who are in Valcartier on a temporary basis, such as for training, are being moved to another wing to free up contiguous space for possible refugee accommodation,” Defence spokeswoman Ashley Lemire said in an emailed statement.

“In Edmonton, people who are scheduled to be there temporarily on training early in the New Year may be put up in rental accommodations.”

Lemire says they have empty space at Gagetown, since their busiest season is in the summer.