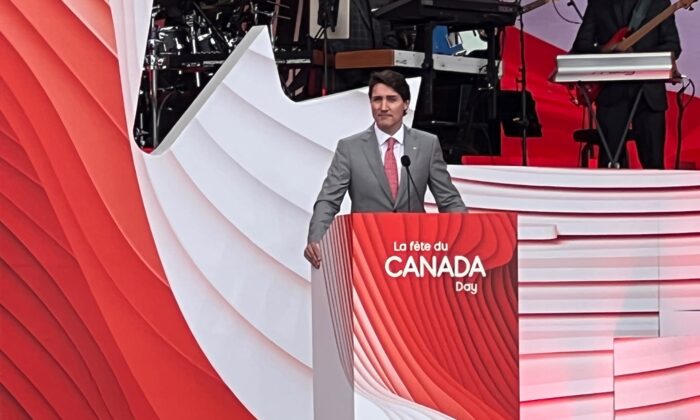 Canadian Flag a ‘Promise of Opportunity’ and ‘Safety’: Trudeau in Canada Day Message

Prime Minister Justin Trudeau says the Canadian flag represents a promise of opportunity and safety for people fleeing war and violence, as he calls on Canadians to recommit to the country’s values of hope, respect, and kindness in his Canada Day statement.

“Today is an opportunity for us all to recommit ourselves to those values—values that the Maple Leaf represents. Because our flag is more than a symbol, it’s also a promise. A promise of opportunity. A promise of safety for those fleeing violence and war. And a promise of a better life,” he said.

On the day marking Canada’s 155th anniversary of confederacy, Trudeau also reflected the country’s history of indigenous affairs, referencing the treatment of indigenous people during the colonial era.

“Today, we celebrate the place we all call home. I know for some, our country’s historic wrongs can make that difficult. But while we can’t change history, we can put in the work to build a better future; one that reflects our values of hope, resilience, kindness, respect, and generosity,” he said.

Governor General Mary Simon also said that Canadians are living on the land of indigenous peoples and called for the building of an inclusive society.

“Wherever and however you mark the day, remember to keep working together to build an inclusive society. Be kind to each other. Make safe spaces where our stories can be told,” she said in her official Canada Day message.

“Listen to Indigenous peoples, on whose land we live. Learn from one another. Have hope for the future, and faith in our neighbours, our friends, our family and ourselves.”

Simon gave a speech at the formal celebrations at the LeBreton Flats in Ottawa on July 1, which Trudeau also attended.

The City of Ottawa met locals and visitors to the the national capital with an unprecedented level of security on July 1, for the first in-person Canada Day events held there since the onset of the COVID-19 pandemic.

Police have a highly visible presence throughout the downtown core, with groups of officers walking the streets and cars framing the entrance to LeBreton Flats Park where the main celebrations are taking place. Visitors have to walk through airport-style metal detectors and have their bags searched before entering.

Thousands of people protesting the federal government’s COVID-19 mandate also poured into downtown Ottawa on June 30, which marks the largest demonstration of this kind since the Liberal government declared a national emergency in February during the Freedom Convoy protests that also demonstrated against the same cause this winter. The police arrested four people on June 30 at the National War Memorial.