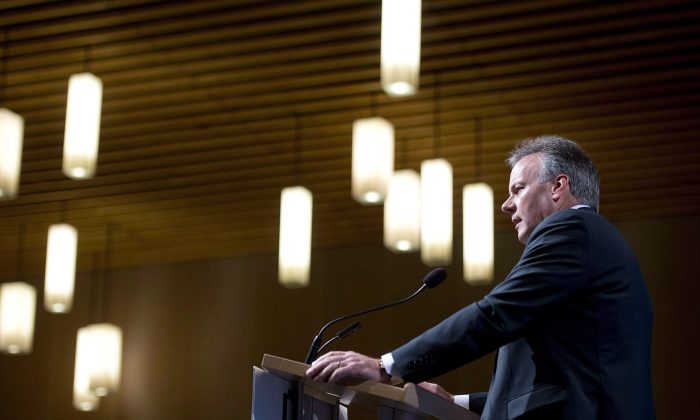 Bank of Canada governor Stephen Poloz is shown speaking to the Vancouver Board of Trade in Vancouver, on September 18, 2013. The central bank revealed the results of their latest business outlook survey on July 7, 2014. (The Canadian Press/Jimmy Jeong)
Canada

OTTAWA—The Bank of Canada says Canadian firms are confident about future prospects and the economy—although they are still not totally sold on a strong recovery and remain cautious about investment and hiring.

But in most cases, confidence levels dropped from the spring survey.

“The summer business outlook survey continues to offer some encouraging signs for the economic outlook, although lingering uncertainty and intense competition still hinders the pace of growth,” the bank said in an analysis of the results, which are based on a survey of 100 representative firms conducted between May 20 and June 12.

Overall, the bank appeared encouraged that expectations for future sales growth remain positive and that business sentiment regarding exports were firming.

Bank governor Stephen Poloz has said the economy will need a recovery in exports to convince firms to spend on productivity-enhancing machinery and equipment and start Canada on a cycle of self-generating, sustained growth.

But until recently, exports have lagged behind other sectors in the economy, although May’s numbers showed shipments jumping by a higher-than-expected 4.2 percent in volume terms.

Part of the confidence stems from improving activity in the United States after that country suffered through a harsh winter that temporarily side-tracked growth.

“Expectations for U.S. economic growth continue to strengthen,” the bank said Monday of business sentiment, “and orders from domestic and international customers show improvement from a year ago.”

About 70 percent of Canadian exports head south of the border.

In the survey, 36 percent of firms said sales volumes rose by a faster pace in the past 12 months than the year before, while 31 percent said they had grown at a slower pace. While still positive by a balance of 5 points, that is below the plus-14 percentage point finding in the spring survey.

As well, expectations on future sales were slightly less positive than in the spring, although with a plus-24 balance of opinion, the result is considered strong.

On the critical hiring intentions question, 43 percent of firms expected to add employees in the next 12 months, compared to only 15 percent that planned to reduce workers. Again, the 28 percent positive balance of opinion was more modest than the plus-45 percentage point result obtained three months earlier.

The most noticeable improvement from the spring survey was in investment intentions, although the bank said that plans were mainly tied to upgrading or replacing existing equipment.

In a separate survey of senior loan officers, the bank said the results pointed to a further easing in overall business-lending conditions during the second quarter, continuing a long-standing trend.