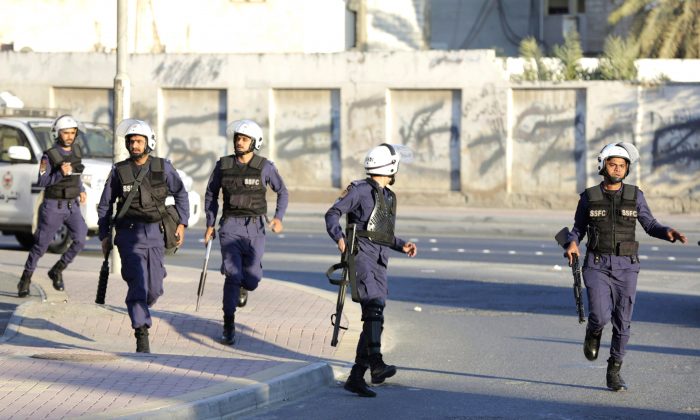 Riot police run toward protesters to disperse an anti-government march in Daih, Bahrain, on Feb. 13, 2016, in the run-up to the fifth anniversary of Bahrain's Arab Spring uprising. Researchers say a Canadian company is helping block news and opposition websites in Bahrain. (AP Photo/Hasan Jamali)
Canada

LONDON—Researchers have identified a Canadian company at the centre of a small Arab nation’s online censorship system—a finding that sits awkwardly with Ottawa officials’ public support for digital freedoms.

Specialists from Internet watchdog Citizen Lab said in a report published Wednesday, Sept. 21, that web-filtering firm Netsweeper Inc. is helping block news and opposition websites in Bahrain, a Gulf Arab monarchy that has been wracked by unrest since pro-democracy protests were stifled there in 2011.

“Canadian policymakers have been quite vocal about saying that this is wrong,” he said. “Yet here we have a Canadian company that’s doing precisely that.”

Netsweeper, based in Guelph, Ont., did not return a call and other messages seeking comment. In 2011, a company spokesman was quoted as saying there was “no good conversation for us to have” about allegations of censorship.

The banned Bahraini sites include ones run by opposition and human rights groups as well as sites critical of Islam.

Citizen Lab said the banned Bahraini sites include ones run by opposition and human rights groups as well as sites critical of Islam. Gambling and pornography sites were also blocked.

Netsweeper’s suspected role as Bahrain’s censorship provider first came to light after the firm appeared to win a contract for a “national website filtering solution” earlier this year. Researchers at Citizen Lab said they confirmed the company’s role there by scouring Bahrain’s Internet space for Netsweeper installations and trying to access blocked sites from a server in the country.

Canadian government officials, who are promoting an upcoming Dubai trade show Netsweeper is supposed to attend, said in a statement that while they could not comment on specific companies, “we expect Canadian businesses to operate lawfully and according to Canadian values.”

Based at the University of Toronto’s Munk School of Global Affairs, Citizen Lab has made a specialty of exposing the companies behind surveillance and censorship in the Middle East and beyond. It has been tracking Netsweeper’s work for years.