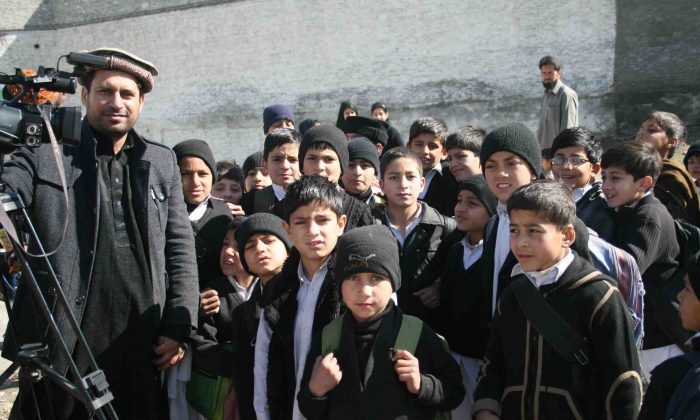 School children gather around filmmaker Moshin Abbas outside Khushal Girls High School and College in Mingora, in the Swat valley region of northwest Pakistan. This is the school Malala Yousafzai attended before being shot by the Taliban last October. (Minhaj Uddin/Frontline Media Canada)
Entertainment

‘Malala: A Girl from Paradise’ to be released in September
By Barbara Brown

Award-winning Pakistan-Canadian journalist Mohsin Abbas is soaring high on the wings of a new passion—a documentary film he is making about the remarkable courage of a 15-year-old school girl from his native Pakistan.

“Malala: A Girl from Paradise” tells the story of Malala Yousafzai, who made international headlines last October after being shot in the head and neck by a Taliban gunman while on a school bus with classmates.

The education activist first came to international attention after writing a diary for the BBC’s Urdu service about her life in Pakistan’s Swat district under Taliban rule. Writing under the pen name Gul Makai, she chronicled the plight of children in the region after the Taliban outlawed schools for girls.

Following the attack on her life, a critically wounded Malala was flown to the Queen Elizabeth Hospital in Birmingham, England, where she underwent numerous surgeries by specialists in skull reconstruction.

Abbas and a four-member file crew recently spent four months in Pakistan where they interviewed friends and family of Malala for the documentary. He says insurgency in the volatile tribal regions make it one of the most dangerous areas in South Asia for working journalists.

“The region is still very, very dangerous for journalists. When I go through our footage and my memories of our time spent there, I get goose bumps,” he says.

A press freedom activist and blogger who is fluent in five languages, Victoria-based Abbas is editor of the Diversity Reporter, a multilingual weekly newspaper for newcomers and immigrants in Canada.

Abbas plans to rejoin his crew in Pakistan in June for the second phase of filming and post-production work. He is attempting to raise $20,000 to complete the film, which he hopes to present to the public in September.

The documentary explores how the failure to silence Malala has inspired men, women, and children, not only in Swat Valley but beyond the borders of Pakistan. The film tells how a young girl from a remote village stood up against Stone Age ideologues who wanted to take a nation of 200 million back in time.

Malala has become a shining light and force for change, not only in Swat Valley, but around the world, says Abbas.

“We have some remarkable interviews about how she has changed the mindsets of people. A prime example is a woman we interviewed whose family business for generations had been [traditional folk] dancing. This woman told us because of Malala, her daughters will not dance, but will go to school.”

He says the females in this woman’s family have never been formally educated but learned how to make money for the home through performing their traditional folk dances.

The film also explores the political intrigue and conspiracy theories that swirl around the attempted murder of Malala. The documentary, in Urdu with English subtitles, will explain how the oppression of women, political tensions, and social injustices led to the horrendous attack on the young schoolgirl.

At the height of the 2007-2009 Taliban insurgency, 401 out of 1,576 schools in the Swat Valley were destroyed by the militant group. About 70 percent of the destruction targeted schools for girls. Some 60,000 children in the region have been deprived of education, with girls suffering appalling rates of illiteracy.

The Pakistani government’s record on education is also of great concern, with less than 3 percent of gross domestic product spent on education—among the lowest in the world. The government spends seven times more on its military than on education.

Being a Pakistani-born journalist, Abbas said he believes he can bring a deeper understanding of the culture and political turmoil that resulted in the attack on Malala.

Having survived being shot by the Taliban, Malala recently returned to school in Birmingham, where she now lives with her family while receiving treatment. She has also signed a book deal worth a reported $3 million. “I am Malala” is expected to be published this fall.

She has become the youngest person to ever be nominated for a Nobel Peace Prize, and is a favourite to win because she embodies the causes of women and girls’ right to education, the plight of youth, and the fight against extremism.

Abbas says he intends to direct part of the proceeds from his film to Almurtaza Girls School in Punjab Province to establish a library in Malala’s name. For more information and to support Abbas’s efforts, visit www.malala-film.com