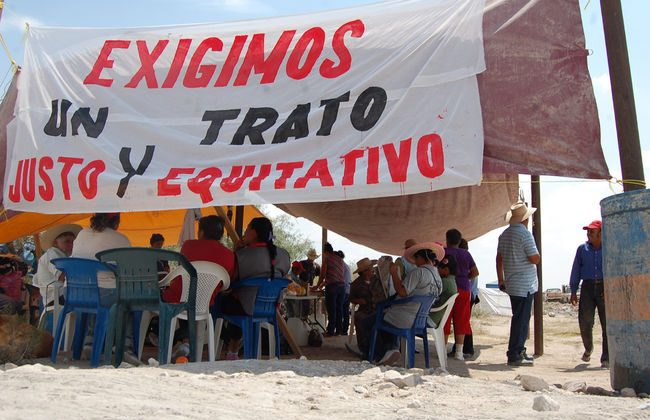 Ejido La Sierrita community members gather in the shade of a tent in the summer of 2012 during a protest outside Excellon Resources’ La Platosa silver mine in Durango, Mexico. A new report says Canadian diplomats went too far in their attempts to protect Excellon’s interests in a dispute with the Ejido La Sierrita. (Ejido La Sierrita)
Canada

MiningWatch is blaming diplomats at Canada’s embassy in Mexico for overlooking Toronto-based Excellon Resources Inc.’s efforts to avoid redressing a violated land-use contract and repression against a peaceful protest in 2012.

A recent report by MiningWatch cites internal documents obtained from Canada’s Department of Foreign Affairs through an access to information request by the Ottawa-based NGO and the United Steelworkers Union.

The protest took place in Durango, Mexico, between July and November 2012, and involved Ejido La Sierrita, an agricultural community of 127 landowners who were protesting over poor working conditions and other issues related to Excellon’s La Platosa mine.

Talks between the community and the company had broken down, and the landowners and union workers undertook the protest after filing two formal complaints in Canada alleging serious land and labour rights violations without result.

The embassy offered ‘unconditional support’ to Excellon ‘in order to protect the company’s economic interests at the expense of our human rights.’
— Ejido La Sierrita

“What led us to put in the request was after the army and federal police moved in on the peaceful protest at the end of August, we became aware at that time that Excellon had hired a very well-connected lobbyist in Ottawa who had been a former staffer in John Baird’s office,” said Jen Moore, Latin America program coordinator with MiningWatch Canada and author of the report.

“We were looking for information on the lobbying activities and were quite appalled to find that well before hiring Will Stewart they had had constant communication and a close working relationship with the embassy to lobby Mexican authorities.”

According to a press release from the Ejido La Sierrita, the embassy offered “unconditional support” to Excellon “in order to protect the company’s economic interests at the expense of our human rights.”

“The Embassy spied on the community, pressured Mexican officials in favour of the company, and considered appropriate the use of repressive methods against the ejido´s peaceful protest, with the purpose of guaranteeing the continued operation of the Excellon mine,” alleges Ejido La Sierrita.

Moore says the documents show no evidence that embassy officials urged Excellon to act on the landowners’ complaints.

“Not once do we see the embassy say anything about how the company should respect its contract, respect labour rights or labour law with its workers and actually acting on the complaints that had been brought. On the contrary, there is absolute silence in the nearly 250 pages we received,” she said.

The Department of Foreign Affairs dismissed the complaints contained in MiningWatch’s report and suggested no wrongdoing on the part of officials at the embassy.

“To suggest that Canadian officials operating from our diplomatic mission in Mexico acted in a way that does not reflect the highest ethical standards and Canadian values is entirely without merit,” the department said in a statement issued to the Epoch Times.

“The Government of Canada expects all Canadian companies operating abroad to follow all applicable laws.”

Last month, the protesters won a decision ordering Excellon to pay the Ejido La Sierrita for use of their lands. They have since taken action to rescind their contract with Excellon.