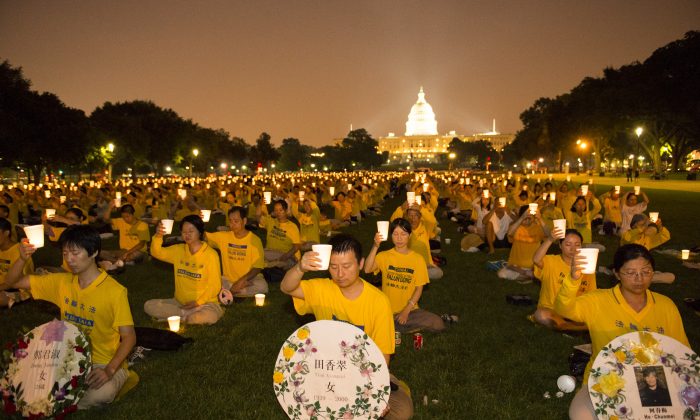 Falun Gong practitioners take part in a candlelight vigil in Washington, D.C., to raise awareness about the brutal persecution of their fellow practitioners in China. (Davids and Goliath)
Canada

The world’s largest online film festival has awarded a Canadian documentary filmmaker with its top prize.

In the Viewster Online Film Festival (VOFF4), first place and the top prize of $50,000 were awarded to Leon Lee of Vancouver on Dec. 9 for his film “Davids and Goliath.”

The winning film documents the efforts of two Canadian Nobel Prize nominees to expose what is arguably the world’s most shocking human rights abuse—the killing of prisoners of conscience in China to feed that country’s lucrative organ trade.

The #VOFF4 jury said the film is “well-focused and chooses well-informed individuals with a first-hand knowledge of the dire situation in China, putting their cases forward in a clear and gripping manner.”

In 2006, evidence came to light that adherents of the Falun Gong meditation practice were being detained as a live organ bank, with their organs being harvested to be used in transplant operations. Matas and Kilgour conducted an independent investigation into the allegations, collecting evidence and testimony.

They published their findings in a report in 2006, which showed that between 2000 and 2005, approximately 41,500 transplants were performed in China for which the source of the organs remained unexplained.

They concluded that Falun Gong prisoners of conscience were the most likely source of the organs, and that the practice of pillaging those organs was sanctioned by the state.

“When I started looking into the irrefutable evidence produced by the two Davids, it shook me and compelled me to tell this story,” Lee said in his winner’s statement.

Falun Gong has been banned and persecuted by the Chinese Communist Party since 1999. Millions of its adherents are estimated to have been detained in China’s vast prison system, where they are subjected to torture and brainwashing.

“Documentary film is a powerful tool for change,” Lee said. “When you first hear about the systematic corruption and terrifying human rights abuses currently taking place in China it’s almost so terrible that it’s hard to believe.”

He said the prize money will go toward broadening the reach of the film.

“Getting this kind of exposure will do great things for the cause and the prize money will help to further promote ‘Davids and Goliath,’ so we can keep spreading this story around the world,” he said.

“We are releasing the film worldwide in 2015 under the title ‘Human Harvest,’ along with an interactive site that will help educate and create additional awareness on the subject.”

Viewsters is an international video on demand platform for free series and films. The #VOFF4: Share It Forward festival had 230 films from 47 countries covering human rights, social, economic, and environmental issues, and hosted a million online visitors.

“#VOFF4 was our most successful online film fest yet,” said CEO Kai Henniges. “It exposed pressing issues that desperately need our attention. This was an amazing experience. We are happy to support the winning filmmakers and their causes.”

Second place and $20,000 was awarded to American director Chris Godwin for “Deafening Silence,” a drama short showing the trauma of stillbirth from the mother’s perspective.

Cacau Rhoden of Brazil won third place and $10,000 for “Drops of Joy,” and US documentary “Baja’s Secret Miracle” won the festival’s Audience Award, which resulted in a $20,000 donation to the Climate Reality Project.

The #VOFF4: Share It Forward films will be available for viewing on www.viewster.com until Dec. 15, 2014.