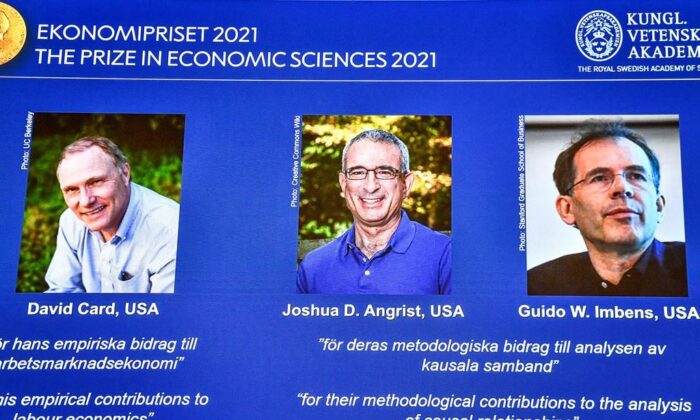 From left, on the screen are the winners of the 2021 Nobel prize for economics; David Card of the University of California at Berkeley; Joshua Angrist from the Massachusetts Institute of Technology; and Guido Imbens from Stanford University, announced during a press conference at the Royal Swedish Academy of Sciences, in Stockholm, Sweden, on Oct. 11, 2021. (Claudio Bresciani/TT via AP)
Canada

Canadian David Card One of Three U.S. Based Economists to Win Nobel Prize

When the phone rang around 2 a.m. telling David Card that he won the Nobel Prize for Economics, the Canadian-born economist thought it was a stunt.

But when he saw the phone showing a Swedish number he thought maybe it wasn’t a joke after all.

“I have an old friend I met in ninth-grade English class,” he said with a chuckle at a news conference Monday.

“When the teacher threw a book at him, it hit me by accident. He is the kind of guy who would pull this stunt.”

Guelph, Ont., born Card, 65, was awarded one half of the prize, while the other half was shared by Joshua Angrist from the Massachusetts Institute of Technology and Dutch-born Guido Imbens, 58, from Stanford University.

Card, of the University of California at Berkeley, is being recognized for pioneering research on the labour market impacts of minimum wages, immigration and education. He is the first Canadian this year to win the award.

He got his undergraduate degree at Queen’s University in Kingston, Ont., and his PhD at Princeton.

Angrist and Imbens are being recognized for working out the methodological issues that enable economists to draw solid conclusions about cause and effect, even where they cannot carry out studies according to strict scientific methods.

“Card’s studies of core questions for society and Angrist and Imbens’ methodological contributions have shown that natural experiments are a rich source of knowledge,” said Peter Fredriksson, chair of the Economic Sciences Prize Committee.

“Their research has substantially improved our ability to answer key causal questions, which has been of great benefit for society.”

Card worked on research that used restaurants in New Jersey and in eastern Pennsylvania to measure the effects of increasing the minimum wage.

The award seemed bittersweet because Krueger died in 2019. Card paid him tribute.

“I really have to mention Alan Krueger, who was my co-author on many papers including the minimum wage paper that is cited by the Nobel Committee,” Card said.

“And I’m sure that if Alan was still with us that he would have been sharing this prize with me. I think I just have to bring that up.”

He also acknowledged those who helped him.

“I feel like my career has been greatly benefited from so many people,” Card said.

“My teachers, my students, my colleagues, the support of my wife, so, so many people have helped me along the way that I am not entirely sure that I should be the one person who is singled out for an award.”

He thanked him for “helping us to better understand the economy” in a way that benefits everyone around the world.

He said he and his co-author Krueger faced disbelief from other economists about their findings.

“At the time, the conclusions were somewhat controversial. Quite a few economists were skeptical of our results,” he said.

But, he added that research builds slowly.

“The labour market or any economic phenomenon is always evolving.”

A particular piece of research may have some influence, but it takes “many, many years” and rethinking of how that evidence actually either confirms or contradicts existing wisdom, he said.

His advice to students and others is to not give up if results are not fully and immediately appreciated.

“So, if you want to take that as a possible way, you know, to think about your own work.”

With files from Noushin Ziafati and The Associated Press