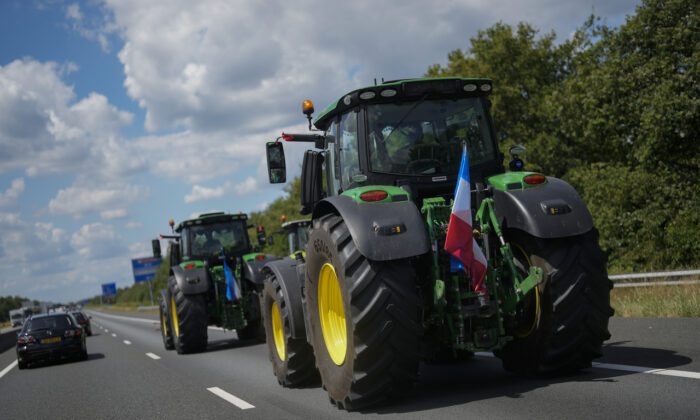 Demonstrating farmers slow down traffic on a motorway near Venlo, southern Netherlands, on July 4, 2022. Dutch farmers angry at government plans to slash emissions used tractors and trucks to blockade supermarket distribution centers, the latest actions in a summer of discontent in the country's lucrative agricultural sector. (Thibault Camus/AP Photo)
Canada

Canadian Convoys to Rally in Support of Dutch Farmers

Canadian farmers and activists are launching convoy protests across the country on July 23 to stand in solidarity with Dutch farmers who have been protesting against their government’s climate change policy since June.

The protests are decentralized and organized by locals in each province. The planned demonstrations have received much feedback, and will likely be “well-attended,” according to Mark Friesen, founder of the Forum for Canadian Sovereignty and a co-organizer of the event in Saskatchewan.

“We’re talking about the livelihoods of a predominant number of people in this province of Saskatchewan, [as well as] Alberta, Manitoba, and even in B.C. in the Lower Mainland. There’s a lot of farming there,” Friesen told The Epoch Times.

In Ontario, six main convoy groups across the Greater Toronto Area will hit the road at 11 a.m. and rendezvous at Vaughan Mills. Another group in Ottawa will hold a rally at the Constitution Square building downtown at 2 p.m.

In B.C., one group will hold a “World Wide Rally” at the Netherlands Consulate in Vancouver, while another will head to the Vancouver airport. The convoy in Alberta will head north from Calgary to Husky, making multiple stops along the way. A Saskatchewan convoy will depart from Moose Jaw at noon, heading for Regina.

The fuse to the Dutch farmers’ protests was laid last year, when the coalition government proposed radical plans to cut livestock numbers in the country by 30 percent to meet nitrogen greenhouse gas emissions targets.

This proposal came after the highest Dutch administrative court found in 2019 that the country has been breaching EU laws for not reducing excessive emissions of nitrogen, which it said was harmful to plants and animals in some natural environments.

The EU climate change policy aims to achieve the United Nations’ 2015 Paris Agreement target for cutting greenhouse gas emissions in order to curb the rise of global temperature. The agreement is considered a vital part of the U.N. Agenda 2030 for sustainable development.

In particular, the Dutch government has pointed to livestock that produce manure, which, when mixed with urine, creates ammonia that heavily contributes to what it called a “nitrogen crisis.”

On June 10, the Dutch government issued a national and area-specific plan for curbing nitrogen greenhouse gas emissions, with some areas required to slash emissions by 70 percent, or even 95 percent. It openly acknowledged that “there is not a future for all [Dutch] farmers within [this] approach,” as reported by the U.S. Department of Agriculture’s Foreign Agriculture Service.

Christianne van der Wal, the Dutch minister of nature and nitrogen policy, said there is a possibility that the government will expropriate land from farmers who don’t comply, reported the Dutch broadcaster NOS Nieuws.

With the Netherlands being the world’s fifth exporter of food, the proposal will not only hit Dutch farmers but will likely exacerbate the current worldwide fertilizer and food shortages.

On June 24, United Nations Secretary-General Antonio Guterres warned that “there is a real risk that multiple famines will be declared in 2022,” adding that “2023 could be even worse.”

In light of the protests in the Netherlands, Friesen said he is “very concerned” about the implementation of the U.N. Agenda 2030 in Canada, which he said will hurt farmers in the country.

“What we’re doing in terms of support for our Canadian farmers is a little bit preemptive. It’s a little bit to say, ‘We’re paying attention. We’re watching what’s happening in the Netherlands. Don’t do it here,'” he said.

He pointed to a recent policy that made it mandatory for poultry and livestock owners and commingling site operators in B.C. to register for a Premises ID.

The Premises ID, which came into force on July 1, links poultry and livestock—including bees, doves, and llamas, among others—to specific geographic locations, according to the program’s website. The B.C. government said the Premises ID is used “to inform planning and response to animal disease events or natural disaster emergencies like floods or fires.”

But Friesen is not convinced, saying that it resonates with the Dutch government’s radical policy to comply with the U.N. Agenda.

“This speaks to the control mechanism that they want to put into place where now they’re expecting farmers and ranchers to identify every single animal they have on their farm, on their premises, and ID each animal,” he said, adding that in the event of a bird flu or pandemic, the government will know “who to contact, how many animals they have, and … how many need to be culled.”

The Epoch Times reached out to the B.C. Premises ID Program for comment but didn’t hear back by publication time.